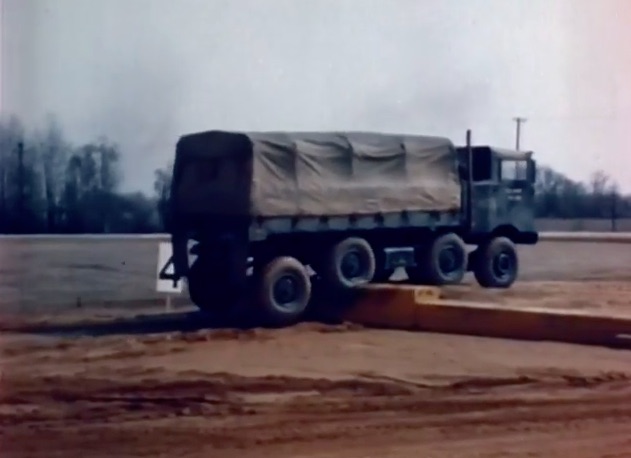 I like big trucks and I cannot lie. Especially if those trucks happen to have the US Army name on the doors. I am not sure why but Army trucks have been a fascination of mine since I was a kiddo. Hence my love for seeing the lumbering beasts in action. This 1966 US Army film shows prototype Army trucks being tested in a bunch of different ways. Watching the 5-ton literally drive up a wall is pretty bad ass, at least in my opinion!

One of the funny lines in the film comes when the narrator makes mention that the five ton truck is OK in the water as well as on land and that it was designed for use in all different situations and terrains, including inland waterways. I love the fact that he basically specified that the truck cannot be taken out on the ocean. That’s kind of a let down.

Outside of the 5-ton truck there are some other machines used that are kind of cool and different looking. Slogging in the mud, going over the uneven hill course, and again, spending time in the water, they are getting worked hard. Does anyone know if the trucks shown in the film actually made it into the Army fleet? Has anyone driven one or all of them?

One thought on “Cool Video: This 1966 US Army Film Shows Prototype Army Trucks Being Tested”