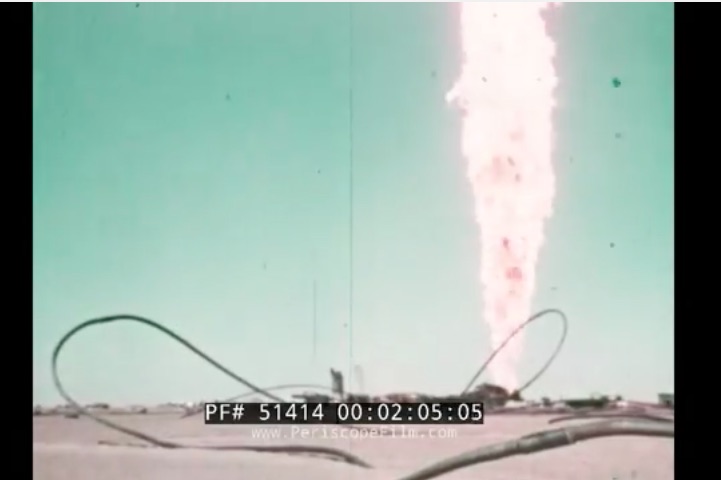 Red Adair is one of the most interesting guys you will ever read about. He was one of the most famous guys in the world for a long time and that was because he was one of the smartest, ballsiest, and most innovative oil well fire fighters in history. He developed methods and equipment that are still in use today. We see the achievement that made him an international hero here, the extinguishing of a gas well fire known as the “Devil’s Cigarette Lighter” in 1962. How’d he put out a fire that was burning 700ft tall? With dynamite. Seriously.

This film is amazing because it shows the entire six month process that was put into place to get this thing out. From the shipping of the equipment, the clearing of debris, the attack of the fire itself, and then the repair of the well head after it was out, there’s nothing  easy, simple, or safe about this. The crew was huge and if you know anything about Red Adair you have likely heard of “Boots and Coots” who were his two right hand men. You’ll hear them referenced a few times in this video.

The scope of the job is amazing and you’ll appreciate Adair’s brilliance when you see all of the stuff that has to happen to make this work without getting someone killed. Even with all of his knowledge and precautions you’ll hear him say that some parts of the operation get “spooky” and if he was feeling that way we cannot imagine what a normal person would think of them.

To us the scariest part of the video to watch is when the guys are working around the well head post fire. The ferocity that the gas it leaving with is insane and Adair said that at times it felt like it had enough of a vacuum to literally carry you off of your feet.

This is guy stuff right here! Watch Red Adair and the boys complete the achievement that launched an international career and stardom the guy could have never imagined.

Dakar 2022 Video: Best Of Car Highlights From The Entire Race Right Here The Boss: Watch This Massive 1966 Hayes Logging Truck With A 16V-71 Detroit Diesel Engine Rumble Onto The Trailer !