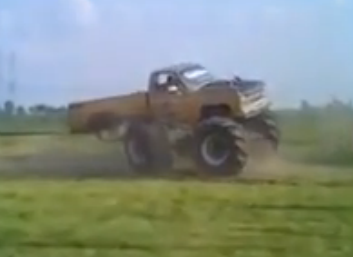 Forgive us as we try to reconstruct the events leading up to this momentous video. There were cans, nay, gallons of Keystone beer chugged. There were minutes of angry Ford versus Chevy rumblings and then finally one man suggested, “Let’s hook up our giant trucks and have a tug of war.” Not wanting to be shown up, the other guy had to do it. The results are pure and total awesome destruciton. (Unless you are the guy in the Chevy).

These trucks are obviously home built pieces, most likely mud trucks built in the same spirit as the original monster trucks of the early 1980s. They have little to no suspension travel and gas engines that benefit from the steep gearing in the transfer case and axles. Like those early monster trucks, fabrication and strength are lacking and that point will prove itself in the most obvious way once you watch this video. The Chevy literally starts bending in half and then essentially falls apart as the Ford drags it clear across the field. The guy in the Ford never looked back to the other other truck crumbling.

In the defense of the dude driving the Ford, maybe his rear view mirror was broken or some Keytone splashed into his eye. Hell, there had to be SOME reason he didn’t stop pulling!

Watch all the way to the end. This is a major league fail.