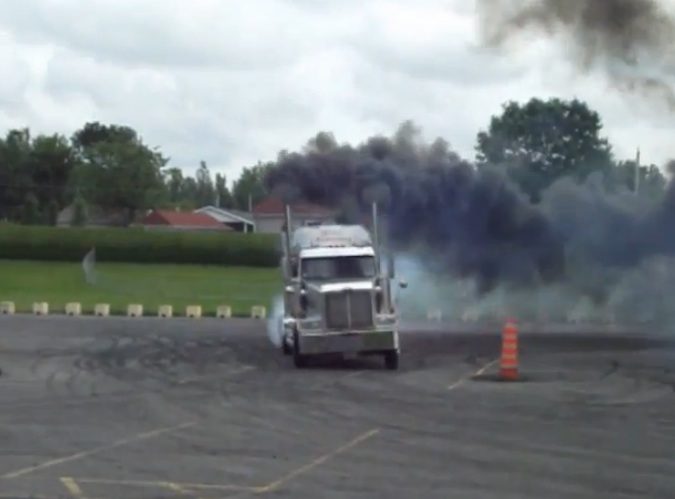 The name of the guy driving this very powerful Wester Star rig is Jacques Lafleur and as you’d probably guess, ol’ Jacques is one of the many French-Canadian hot rod big rig enthusiasts that we regularly show scorching drag strips, racing up hill with heavy loads, and generally embarrassing muscle cars with their sheer might. In this video, speed is not the focus for Jacques, but instead a large burnout area, a pair of locked rear axles, and a truck that can roll coal and send plumes of soot many feet into the air getting worked hard to put on a show are. This video is from last year and we saw it pop up on our buddy Mike Bradford’s Facebook page so we figured we should share it because the truck does some pretty awesome stuff during the exposition.

Outside of smoking eight tires at once, which is impressive no matter how you cut it, the relatively “high speed” drift that Lafleur gets this big truck into near the beginning of the video is really fun to watch. We have personally seen this truck on a quarter mile drag strip run down into the 13s (and it may even be quicker now) so power is not the issue here, and even gravity seems to yield to the rig. We’re guessing you have to have some pretty big “confidences” to slide a truck around like Jacques does here because to say that it has a little lean going on would be the understatement of the week. It doesn’t seem like it would take much to flop the Western Star onto its side when it is sliding as hard and fast as it here here. Maybe we’re wrong but it sure looks that way.

The truck is worked to the hilt, like lots of these French-Canadian hot rodded rigs and it honestly isn’t even working up much of a sweat to do what it does here. The only thing that stinks is that we don’t have one of these for ourselves because we’d spend days on end driving it like Jacques does here. Killer truck and a skilled wheelman!

The Parting Shift: Bangin' Gears on the Bottle! Oops! This Collection Of Old School Wild Rides, Carnage, and Funny Moments In Pulling Is Great