Dare To Be Different: Check Out This Caterpillar 3208 V8 Converted To Run On Methanol With A Massive Turbo! 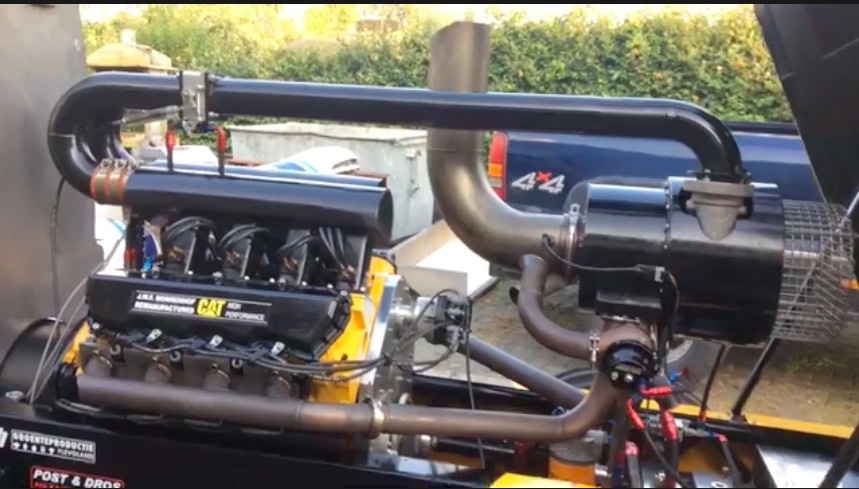 When it comes to getting different with power plants there is not a motorsports on Earth that holds a candle to tractor pulling and that is doubly true in Europe where everything from radial engines to tank mills can be found powering tractors. In this case we have something 100% BangShift approved in the nose of a tractor called Ruff Stuff. You are looking at a 10.4L Caterpillar 3208 V8 diesel engine converted to run on methanol and being force fed by a massive single turbocharger. The team claims that it makes 2,200hp and we have no reason to doubt them.

The diesel/methanol conversion is poplar here in the USA but typically we see it with engines like the International DT466 and other large inliners. In fact I’m not sure we’ve ever posted about another pulling tractor that uses the ol’ 3208 for power in any form.

These are good engines that carried a max factory power rating of 450hp and they were found in trucks, boats, and other applications. Manufactured until 1999 they had a long run and while no engine is perfect, they are generally seen as strong and reliable. Coming in at a hefty 2,000lbs, it’s as robustly built as any diesel you are going to find. We love the look of this on with the double barrel style intake, the multiple fuel nozzles per runner, and the killer sound it makes, even just sitting here running in this video.

It sounds even better working with a sled being hauled! The factory layout is a 4.5″ bore and a 5″ stroke. We have no data on the internal guts of this engine but we’re guessing it uses a factory crank and then after that? After that all bets are off.

Press play below to check out this truly gnarly setup – Caterpillar diesel on alcohol!

BangShift Thanksgiving Hero: This Guy Built His Own Steam Engine To Run An Alternator Next Generation Up: Madison Payne Is Following Her Grandfather, Mom, and Dad Down A Nitro Powered Path

2 thoughts on “Dare To Be Different: Check Out This Caterpillar 3208 V8 Converted To Run On Methanol With A Massive Turbo!”