Ever See A Mining Haul Truck Bounce? If You Watch This Loading Fail Video You Will 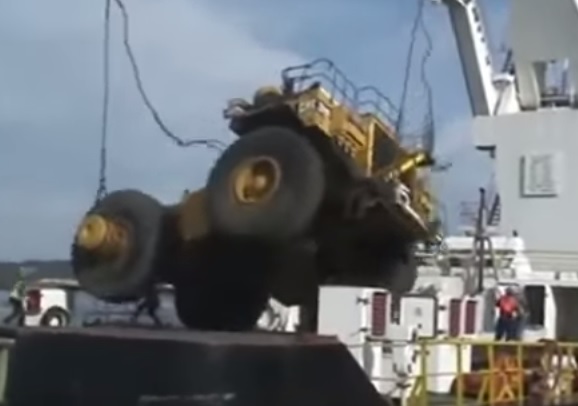 Working on the docks loading ships is pretty dangerous work. Between the massive equipment and cranes involved to the awkward stuff that needs to be brought over the sides of these ships, you never really know what is going to happen next. Take this video for example. A company is having their equipment loaded onto this ship for transport to some foreign land or maybe to take it back home from one. A massive on-board ship crane is handling the work and the load is balanced by a huge bar with four equally beefy chains on it.

The truck being lifted is a huge haul style dump truck that has been stripped of its bed and of its outer rear tires. Even with that weight removed the thing has to weight hundreds of thousands of pounds. I am meaning to say that this thing is no flyweight. I started the video right before the action begins but if you want the full horror show make sure to dial it back to the beginning. Why? About 30 seconds before the calamity happens there is a man standing DIRECTLY under one of the massive tires helping to “guide” the load. That guy could have been turned into a grease spot in a nano-second but he made it, thankfully.

Maybe the most impressive part of the whole thing is how the truck actually bounces and those big tires barely deflect an inch during that process. Obviously designed to be burdened with the full load of rocks and stuff the trucks normally carry it was interesting to see what they did when shock loaded and the answer? Not much.

The reaction of the engineers/guys with the camera is pretty much priceless. There’s a lot of stunned silence, one confirming that they got the thing on tape and then some frustration as well. Imagine what the guy who was standing under the tire earlier was thinking?!

This Hill Climb Racing Video From Scotland Will Blow Your Mind - Incredible Speed and Skill At The Donue Hill Climb Watch This Classic Ford Falcon Make 2,000hp On The Hub Dyno - Goes 7.0s at 200+

One thought on “Ever See A Mining Haul Truck Bounce? If You Watch This Loading Fail Video You Will”