Ever Wondered What It Would Look Like To Careen An SUV Through Gas Pumps? This Video Shows You! 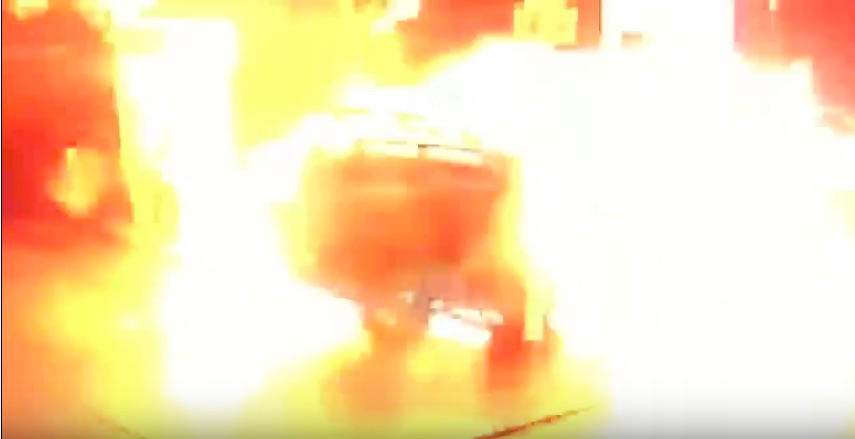 We’ve all seen the movies where a car is flying out of control, crashes into a gas station, and then then pyrotechnics ensue. Massive explosions, fire, full on destruction. Crater in the Earth type of stuff. In a real-life version of Mythbusters, a guy in Seattle took an SUV through the gas pumps at a station after being hit by another vehicles and while it is pretty insane and impressive looking, it ain’t the end of Bullit if you know what we mean.

The initial explosion when the truck hits the pump is pretty huge and we’re guessing that’s the gasoline in the pump itself. We were expecting some sort of geyser of flame to erupt and spurt forth from the ground but upon further consideration, the pumps have to pull the fuel from the tanks in the ground so there’s no real pressure there like a fire hydrant or anything.

Local firemen go the whole scene secured and handled quickly according to the reports that we have read on the situation and the driver of the truck was not badly injured. This does answer one of those questions, though. When you think, “What would happen if someone drove a truck through here…” now you know and thankfully it isn’t as bad as you think!

Body Work Tech Video: Paintucation's Kevin Tetz Takes You Through The Basics Of Panel Alignment The Maniac Is At It Again: Colin Furze Is Building A Crotch-Rocket Powered Bumper Car!

2 thoughts on “Ever Wondered What It Would Look Like To Careen An SUV Through Gas Pumps? This Video Shows You!”