Gearhead Film History: A Look Back At The Campy And Entertaining 1970s Flick White Line Fever

(By Greg Rourke) – As the season for automotive events winds down here in the Midwest, some of us head into the garage to work on projects. I don’t have any projects, not even a lawn mower, so I’m parking my fat ass on leather reclining furniture to watch a few gearhead classic movies.

In the 70’s, before Brian or Chad were born, drive in movie screens were full of trucksploitation flicks. Every AM radio station was playing C.W. McCalls “Convoy” pretty much 24/7, everyone had a CB radio mounted under the dash of fake wood paneled station wagons, and trucking culture became popular. At least the parts the general populace thought they knew about became popular. Before “Smokey and the Bandit”, before “Convoy”, and before James Brolin was the “Steel Cowboy”, there was “White Line Fever”. 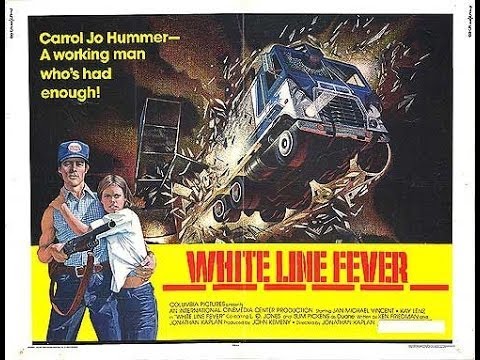 Jan Michael Vincent stars as Carrol Jo Hummer, who has just returned from Viet Nam. He marries Kay Lenz and decides to follow in his fathers footsteps and be a trucker. He gets a bank loan that gets referenced every 30 seconds throughout the film, buys a used Ford WT-9000 from a salesman in Buddy Holly glasses and a tie  purchased at Col. Sanders’ garage sale. CJ heads to a company where his fathers former partner is a dispatcher. Duane Haller is played by Slim Pickens, who memorably rode an atomic bomb being dropped on Russia in “Dr. Strangelove.” He gives Carrol Jo a load of cow shit (literally) to haul to Akron. However, along with the manure is a single box of cigarettes without tax stamps and one slot machine.  Straight arrow CJ says he won’t haul them, and demands his trailer be unloaded. Duane has them smear said load over the inside of the trailer to teach him a lesson. As Carrol Jo hits the road, a corrupt local sheriff  pulls our hero over and handcuffs him to his truck. Some badasses from the loading dock pull up in a Ranchero, and break CJ’s ribs with a 3 foot long wrench. The attack was ordered by Buck, the manager of the freight company. He’s played by perpetually smirking actor L Q Jones, you may recall him as the inflexible county commissioner in “Casino.”
Of course drama at home ensues. Wife Jerri has to work while Carrol Jo’s ribs are healing, and she reveals she’s pregnant. CJ decides his working is the only solution, as his loan payments are mentioned for the 37th time. But he’s been blackballed, no one will give him a load. Desperate, he goes back to Duane and Buck with a rifle and demands a load. CJ picks up his fathers old friend Pops Dinwiddie, who is every 70’s movie black stereotype, and off they go. Of course they send out henchmen to try to stop him, they somehow get ahead of CJ on  the two lane desert roads and we have a combination shootout/ big rig demo derby. No surprise here, CJ prevails. 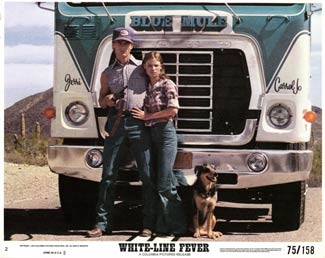 Now other truckers decide they don’t have to haul contraband freight. We learn who’s behind all this, the mysterious Glass House, who’s top executives spend all their time in  a hot tub together, or on the golf course. They can’t have truckers organizing, so Carrol Jo must be stopped. They frame him for the murder of Duane Haller, who sent Carrol Jo on a wild goose chase hauling rotten avocados. The Glass Houses professional witness blows his testimony, CJ isn’t indicted and goes home.
Now the Glass House boys are really pissed. They get the Blue Mule vandalized, put a rattlesnake inside, and have Pops killed by what appears to be a ball joint separator shoved down his throat. They set CJ’s house on fire with he and Jerri in it, they survive but Jerri loses the fetus and doctors say she cannot have children again. CJ has had all he can take.
The final scenes are Carrol Jo in the surprisingly show ready Blue Mule (remember all the spray paint and other damage) heading off to show his displeasure at the Glass House. They know he’s coming, and order the guards to shoot him. Despite all manner of firearm blasting away, the Mule crashes through the gate and runs through the huge, elaborate Glass House logo sign. What does this accomplish?
Carrol Jo wakes up in the hospital, and is wheeled out to see a parking lot filled with truckers who have refused to drive, in support of him. We can only assume this has somehow put the Glass House, and their scheme to haul very small amounts of cigarettes and gambling paraphernalia, out of business. 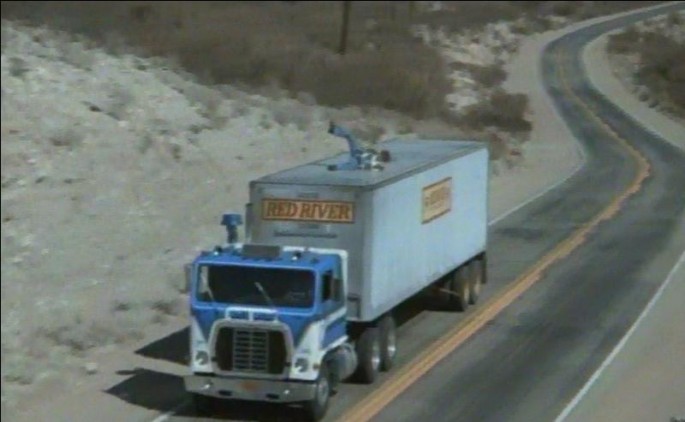 Fans of big trucks will love this film. In addition to the Blue Mule Ford WT9000, we have a Ford LNT9000 driven by bad guys, numerous cabovers that so many truckers had in the 70’s, and a Western Star driven by a guy with mutton chops that would make Elvis jealous. Carrol Jo’s daily driver is a badass 65 Chevy shortbed with deluxe chrome trim. A  bad guy named Clem has a 74 Ranchero. Pops Dinwiddie has a 46 Chevy pickup. And in one scene there appears to be a 65 Z16 Chevelle in traffic.
Don’t bother looking for this flick at Blockbuster, they were put out of business by a vending machine. Don’t look in the vending machine either. You’ll have to shell out about ten clams on Amazon to own this classic. I give it 3.5 stars out of 5.

4 thoughts on “Gearhead Film History: A Look Back At The Campy And Entertaining 1970s Flick White Line Fever”