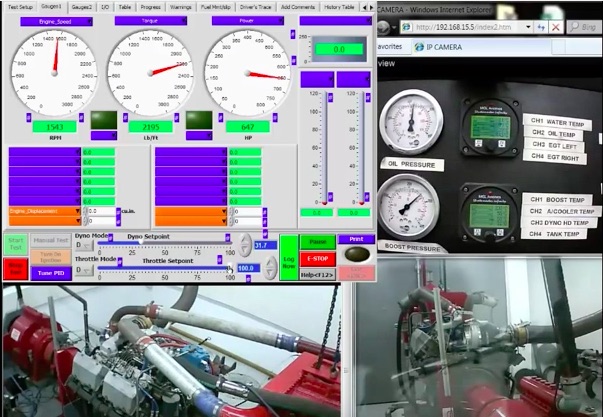 The Mack E9-V8 engine was a 998ci behemoth of a diesel that powered several models in the Mack lineup over the years. Powerful and fairly compact, the engine has its champions and detractors. It did not like to be run hot so drivers that did not mind their pyrometers could find themselves in trouble after a fairly short duration of miles as compared to other others. For this and other reasons some long time truckers call the engines junk but there are others out there, guys like Dale Francis who have built the things into multi-thousand horsepower work horses that live in bad ass sled pulling trucks. Your mileage may vary.

This dyno video is not the most exciting thing you will ever see but it is pretty awesome to watch. Why? You’ll see the big engine crank out more than 650hp which is cool but the 2,500 lbs/ft of torque is really the number to watch. The E9-V8 was offered in horsepower ratings from about 400 up to 650 which would put this guy in the upper echelon. You have to be a gearhead to appreciate and engine that is making 2,000 lbs/ft and 600+ horsepower at 1,700 RPM but this thing does it and is rock steady. Some people wonder how big truck engines get all that weight moving. Taking this beastly thing and putting 10, 12, or 18 speeds behind it and you have enough power to drag a neighborhood down the road behind you.

Like we said, this is not a flame throwing crazy dyno video but rather a look into the real numbers that help get the freight down the road. Now, if you can imagine this as a pulling engine with five times the horsepower and how many times the torque? Those are some numbers, kids!

Morning Symphony: Wheel-Standing Mega Trucks On The Sled Go Home And Drink: The 2020 SEMA Show Will Not Take Place