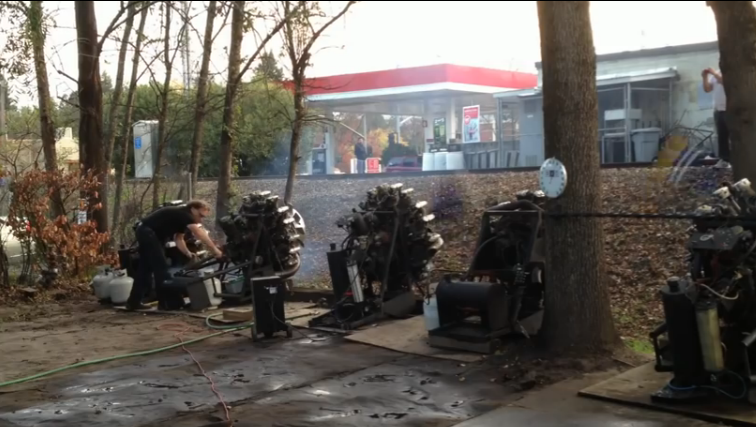 If you’re a gearhead, there’s not doubt that at least once in your life you’ve really pissed of the neighbors. Maybe it is working on the car late in the driveway, firing it up uncorked in the middle of the night to set the timing, rumbling back down your quiet street at all hours, doing burnouts in the street, or making stuff smell bad by painting your car in your driveway or something. Hell, we did half that stuff last week but none of it holds a candle to what a guy named Mike Nieman can do and does do in this video.

Just for kicks, Nieman fires up five, yes FIVE radial engines on test stands in his small backyard. Radials are exceedingly loud and five of them chuffing away at little more than idle speed would create a wall of noise most people have actually probably not experienced in their lives. Your small block idling with open manifolds may as well sound like a lullaby as compared to these things. Thankfully for everyone’s ear drums, Nieman does not rev the engines up but merely lets them idle away. The spectacle draws on lookers from an adjacent gas station and at one point the camera is moved to show another house about 20 yards (tops) away form the phalanx of engines that Nieman is starting one by one.

We think we need a setup like this to really show the neighborhood who is boss. Mike Nieman is the man and the fact that he owns five five radials is one thing but the fact that he’ll light them all off like this is entirely another!

PRESS PLAY BELOW TO SEE MIKE NIEMAN PLAY THE SONG OF HIS PEOPLE FOR THE NEIGHBORS!

The Recalls Of 1968 Show That Not A Whole Bunch Has Changed In About 50 Years Of Auto Industry History Ugly And Unstoppable: This Blazer Is A Study In Gearing, Good Driving, And Zero Effs Given To Looks