May 14, 2017Brian LohnesBangShift XL, XL VideosComments Off on The Amazing Story Of The Hardest Working Vessel On The Great Lakes – A Wandering Workmen Of The Lakes (Video) 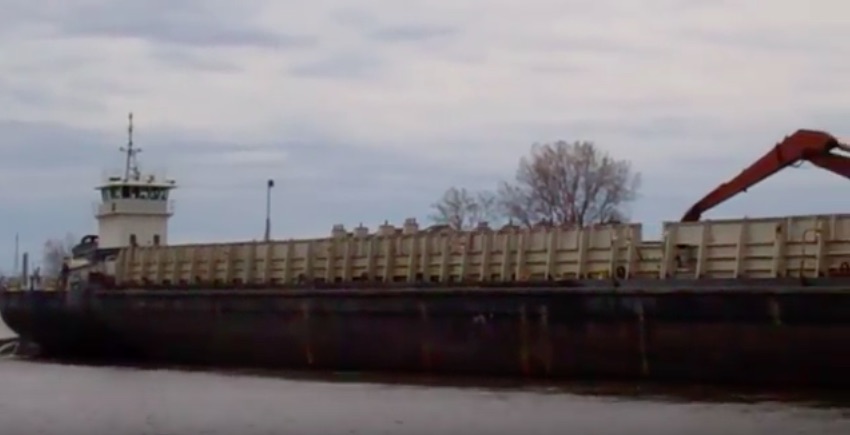 The story starts in 1940 when construction began on the City Of Midland 41 carferry. The vessel was designed for cross Lake Michigan traffic, and could carry 34 rail cars, 50 automobiles, and 375 passengers. It was considered the most luxurious ferry of it’s time. Things went well for her owners, first the Pere Marquette, and later the C&O railroads until 1985 when traffic died down.

A subsequent owner tried to revive her, but that plan never went anywhere, mainly because the boilers were found to be beyond repair. She spent most of the next decade tied up, waiting for the likely scrapping. But then Great Lakes Carferry noticed her and the fact that she still floated, a plan was hatched.
The Midland was extensively modified, all power systems were removed and superstructures cut down. A notch was fabricated in the stern to accommodate a tug boat. A diesel bow thruster was installed to aid maneuverability in small ports. A towboat was purchased and modified to fit the notch in the rear of the barge, this combination makes everything much more agile than the standard shoving arrangement usually used by tugs.
A bit of trivia about the Undaunted, the tug. It was once a sister boat to the tug Daryl C. Hannah. Yes, THAT Daryl Hannah…the actress is related to the Hannah Marine family.
The Midland was renamed the Pere Marquette 41, after her original owners. Equipped with a conveyor, a couple of backhoes with magnets, grapples or buckets, and a couple of skid steer loaders she can handle 5,000 tons of cargo. Pig iron, stone, steel beams or sheets, or almost anything else that fits on her 400 foot deck are carried during shipping season. She can fit in small ports the big boats could never fit into.
So there we have it, the hardest working vessel on the Great Lakes.
Home Movie Footage From The 1960s Showing An Altered Being Push Started On A Neighborhood Street! MAHLE Tech Video: How-To Properly Measure Piston To Bore Clearance