Home Movie Footage From The 1960s Showing An Altered Being Push Started On A Neighborhood Street! 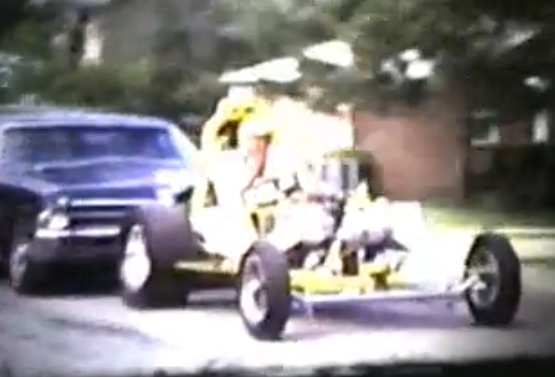 This is video that’s sure to put a big smile on your face! We saw this posted on Facebook and thought that the BS readership would totally be into seeing a group of guys in the 1960s push starting their altered on a residential street where they live. They apparently had just installed a brand new Crowerglide clutch and wanted to test ‘er out. The entrance and proliferation of the “slipper” type clutch in drag racing was a huge deal in the 1960s. These clutches allowed for amazing levels of tuning as compared to previous setups and because of that performances began to get better and better.

The guys are pushing the car with the body off, which is great because it shows off the basic nature of the chassis, the mechanically injected Chevy big block engine, zoomie headers, etc. After the push down and back we see the car with its Fiat body on at the drag strip (which we believe is Oswego Dragway). Both on the street and the track, the car is being shoved along by a huge Pontiac Catalina station wagon of the 1966 vintage. It all rules pretty hard. Hell, just the cars lined up along the street are neater than hell!

We love stuff like this. Just guys wrenching, fixing, and having fun before going racing. Nothing better than that!

HIT THE LINK TO WATCH THIS KILLER OLD VIDEO OF THE “CHICKEN” FIAT ALTERED GETTING A PUSH STREET ON A PUBLIC STREET!

3 thoughts on “Home Movie Footage From The 1960s Showing An Altered Being Push Started On A Neighborhood Street!”