Hard Hit Video: Watch A Pulling Tractor Driver Get Beat Around So Bad His Helmet Flies Off! 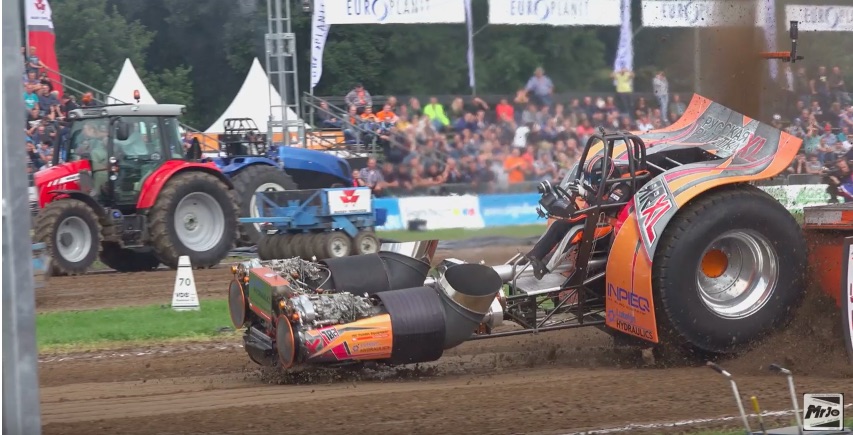 Back when I was working every week at New England Dragway we’d see some really wacky stuff going on with helmets and how people wore (or didn’t) them. You’d see the straps tied in knots, tucked up into the helmet itself, or generally screwed up to the point that you just knew that the damned thing would be flying off as soon as that particular schmo had an issue. While we are not accusing the driver of this tractor of those types of shenanigans we are saying that there was something going on with his brain bucket because when the tractor stops, it is no longer attached to his head! Seriously, this guy gets the snot beaten out of him and the skid lid makes a break for it before it is all said and done. The dude appears to be in la-la land when the track crew runs up to him. Ugly!

This twin turbine powered tractor is awesome and we get a pretty good look at it throughout this video. There is obviously a ton of care and pride that has gone into this operation and we’re hoping that the guy fixes the thing. It is never good when that huge weight you were trying to pull starts to violently push you! You will see this incident in a few speeds of slow motion and that’s the interesting part. When the tractor and sled get into the “push pull” scenario, the violence level for the driver escalates instantly. You’ll actually see his weight thrown back into the gas pedal and the tractor makes a ton of wheelspeed as the tires are in the air and when he lands they bite and he gets blasted back into the cage. Rough!

Thee’s no way anyone would or could a situation like this stopped stopped as quickly as it started so suffering the ramifications of a hard landing when the nose digs in is just “part of the job”.

Press play below to see a guy get beat around so bad his helmet flies off!

Stock Cars On The Strip: This Video From The 1967 USAC NASCAR Yankee 300 At Indianapolis Raceway Park Rules Until Old Age Takes Them Back To The Weeds: Digging Through An Abandoned Junkyard In England

2 thoughts on “Hard Hit Video: Watch A Pulling Tractor Driver Get Beat Around So Bad His Helmet Flies Off!”