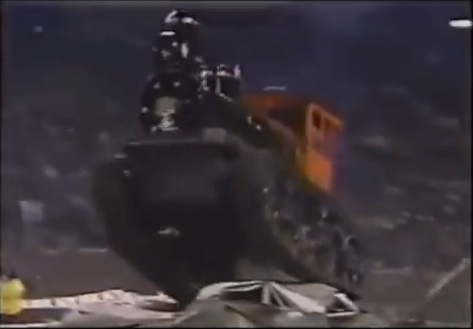 Monster trucks and monster tanks. How much more do you need to read? Considering the limitations that monster trucks had in the 1980s (read: backbreaking suspensions) it only made sense to try and adapt tank platforms to a truck or van body for the ultimate car crushing machine, and there were several successful versions, like the Virginia Beach Beast, a K5 Blazer on an M4 tank, and the Car Killer Ford Ranger. By the late 1980s there were plenty of these beasts, but the monster trucks themselves weren’t going anywhere.

This footage from the 1989 US Hot Rod Association’s Anaheim show gives you three monster tanks: the BigFoot FastTrax, which used twin Ford 460s for power, the Trak Attack Astro, and the Orange Blossom Express, which wasn’t a truck at all but a damn locomotive, and watching Alan Gaines in the cab of the locomotive makes you wonder not if he got a concussion (his helmet goes flying) but how much of one he did get. And for bonus points, the BigFoot FastTrax goes up against BigFoot itself, which I believe (but am not 100% certain) is Bigfoot V after it received it’s updated sheet metal.  It’s cold outside, so why freeze when you can sit here and watch some great monster truck action?

This 1960 Chevy Wagon Has An Exhaust Stack, A Cummins Diesel Engine, And Not A Lick Of Paint - We Love It The Kemah, Texas Cruise Always Delivers On The Sweet Iron - Check Out This Latest Crop - Great Stuff!

One thought on “Historical Video: Monster Tanks And Trucks At the 1989 USHRA Anahiem Show”