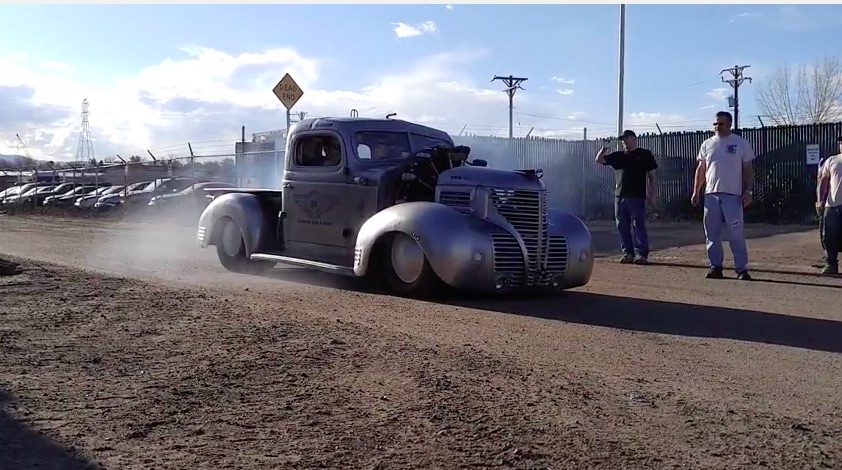 The world of hot rodding never ceases to amaze us. New ideas emerge and are executed when even the most hopeful among us think that the human brain is mined out. Take for example this stunning creation called the Plymouth Air Radial Truck. Built by the guys at Colorado Auto and Parts outside of Denver, this is a 1939 Plymouth Truck powered by a Cessna radial engine. It is incredible and in the videos below you will see it make its first movements and it will make its first drive down the road. The metal work on the truck is fabulous as is the stance and overall look but it is the power plant and drive system that literally steals the show.

Power is derived from a Jacobs R-755-A2 radial engine. With 757ci and a shade less than 300hp it is a massive noise maker that sure stop traffic and anyone with half and ounce of gearhead curiosity passing by. While the engine is cool, how did they get it to move the truck? Clearly the thing is not mounted backwards and the output on a radial engine is in the front because that is where the prop goes, right? Right. The drive system is pretty amazing. A blower belt is attached to a cogged pulley where the prop would be mounted and the other end is on a cogged pulley on a gear box that takes the rotation of the engine on top and sends it out the bottom where there is a driveshaft. The driveshaft is attached to a Turbo 400 transmission which is connected to a quick change rear end. Yes, we told you that this was awesome!

Inside the truck, which has to be a deafening place to hang out thee are dual controls like you would find in an airplane that are linked with small gears so the thing can be driven from either side. While you do not see the inside of the truck in these videos you do see (in the second one) the front drive system and it is as ingenious and fantastic as you’d expect. Rather than running a short “zoomie” off of every cylinder the truck has a big exhaust pipe that ties all the cylinders together and routes the fumes, smoke, and oil vapor out the back. We mention oil because in reading up on the Jacobs it was known to eat up about 2 quarts of oil an hour while in the sky!

Radial engines are fantastic but this thing really takes it to another level. You will surely be seeing a ton more of this truck over the next few weeks so stay tuned. Crank the speakers and listen to the rowdiest hot rod pickup truck in America!

Press play below to watch the maiden voyage of the Plymouth Air Radial Truck!

Lonestar Round Up 2016: Photos From The Massive Texas Hot Rod Happening She Left To Buy A Two-Seater Sporty Car, But Now This Ten-Second 2007 Dodge Charger Daytona Is A Little More Than That!