Insane Video: Watch A Demo Derby Truck Shoot Its Driveshaft Into The Grandstands! No One Killed, Somehow

Sep 15, 2017Brian LohnesBangShift XL, XL VideosComments Off on Insane Video: Watch A Demo Derby Truck Shoot Its Driveshaft Into The Grandstands! No One Killed, Somehow 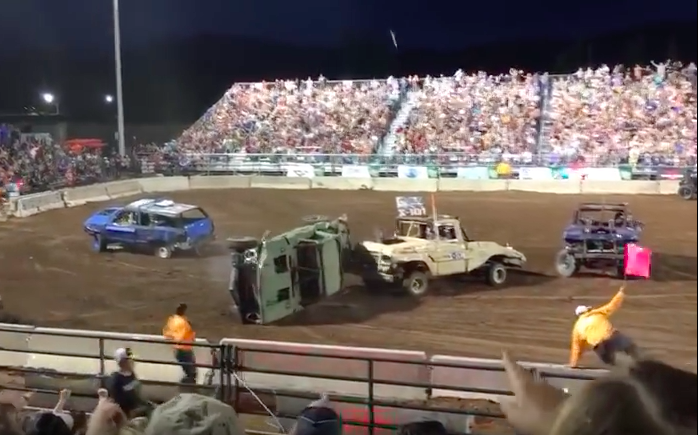 That speck hovering above the grandstand in the rear of the above image is the flying driveshaft which was launched out of a demolition derby truck that had been pushed over on its side. The shaft landed in the last row of the bleachers and it struck a couple members of the same family, among others. The worst injury sustained were by a woman who was gashed on the leg and had her ankle broken by the piece of flying steel. The fact that no one in the 7,000 person packed crowd was killed is amazing because if that thing had spun through the crowd it would have been horrific.

The demo derby was being held in the town of Heber, Utah and the event is the biggest happening in the town all year. The stadium sells out to capacity in under 15 minutes months ahead of time. This is one of the great traditions of this small town and as of yet this will not be the end of it, thankfully. We’re reasonably sure that driveshaft loops will be part of the inspection process next year. A loop on either end of both ends would have totally prevented this calamity from happening. The videos are completely mental.

Now, had the driveshaft not have been thrown out, we’d have never known that guys in Utah are (on purpose) destroying tons of cool old trucks! There are Fords and Dodges in there that are legit classes being pummeled to death!

Here are all the videos we could find of this deal, they are insane –

BangShift Question Of The Day: Are You Cool With Dealerships Building What The OEMs Won't? Classic YouTube: This Jeep CJ-7 Tough Truck Romps Through A Course Like It's Not Even Bothered