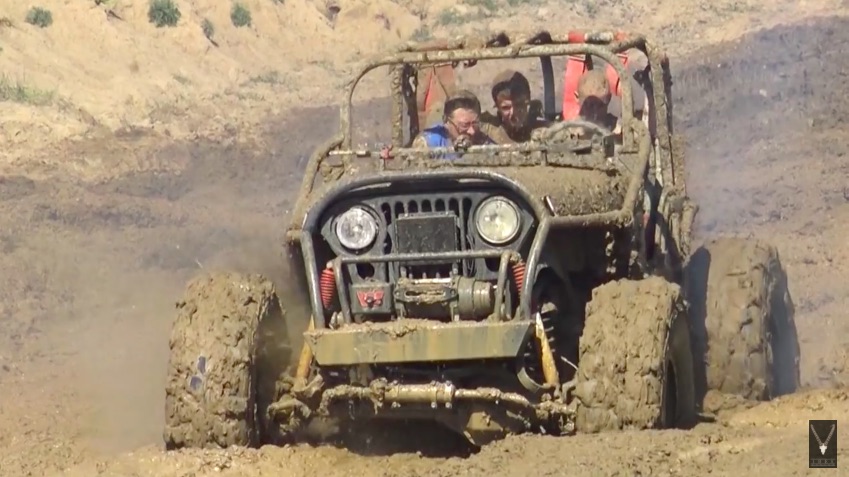 One of the most deceptive parts of a car is the transmission bell housing. They have a strong appearance and because of their job in securing the transmission to the back of the engine block, many people think that they’re a lot tougher than they really are. As dutiful hot rodders we all know that the stuff spinning around inside that bell housing can ungodly damage if and when it decides to come out. In this case what decided to come out was the clutch that was connecting the LS engine in this Jeep to the rest of humanity.

You’ll see the Jeep make a run through the pit and then circle back for another. For whatever reason, likely the slipping clutch, forward progress grinds to a halt in the muck and the driver keeps his foot plowed into the pedal after the wheels have stopped turning and the thing is still engaged. It does not take long before  violent shiver heads through the Jeep, muck spatters about under it and the guys inside all look down at the floor. How the guy in the passenger side did not lose his feet, hands, or half of his fact we’ll never know. There’s a massive gash in the floor where a hunk of the clutch came through.

About three minutes into the video the guy finally gets the camera over to the mucky Jeep and we see the extent of the nightmare. It sawed the trans right off the back of the block and hacked up a bunch of stuff as it was all flying apart. If you can, PLEASE protect yourself and your friends with a good bell housing. It is more money but this was a tragedy that was only not tragic because of dumb luck.

What Does It Mean When A Diesel Engine Runs Away? FORGOTTEN 55 CHEVY GASSER !!! CAN RYAN SAVE IT?