KABOOM! Watch This Demolition Derby Driver Bail Quick When His Has A Flaming Transmission Explosion 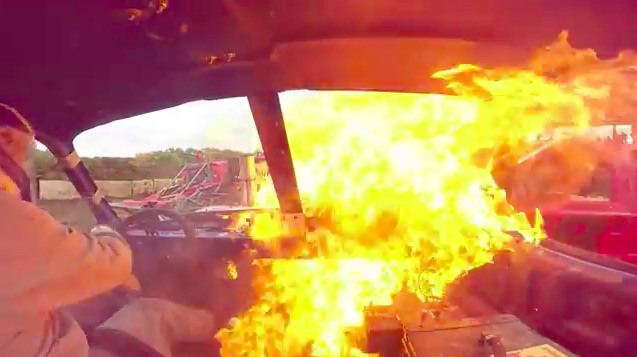 In many parts of the country demolition derby competition goes far beyond just something that happens at a county fair. There are huge money derbies out there and as such there is an industry that surrounds the sport to supply competitors with engines and other components that they need to compete. Hell, Flowtech is now in the business of selling demolition derby headers as a regular part number! This video shows what happens not to the bodies or frames of the vehicles in the berry but the mechanical components that are subjected to that hell as well, specifically the transmission.

This is a truck demolition derby so you have all the insanity of a regular big derby with the added fun of huge vehicles, big hits, and heavy weights. With the constant back and forth shifting, constant full throttle action at relatively low speeds in forward and reverse, and the fact that the transmission has likely got about half a billion miles on it, they can be a weak link in a demolition derby cars. Guys modify the linkages to be able to shift in the face of big damage and they cut holes in the floor to reach down the shift them right on the trans directly if necessary. All of that is well and good until one decides to pop and spew trans fluid all over a hot motor/exhaust. Then this happens.

This same guy posted a video of competing in a truck that had the transmission literally explode, like shoot parts and explode. This fire has more visual impact. In both cases his vehicle had become incapacitated and he just decked the throttle until things ended catastrophically.

He exits right quick and the fire guys are soon to arrive as well. Nuts!

Press play to see this driver scoot quick when hellfire is unleashed!