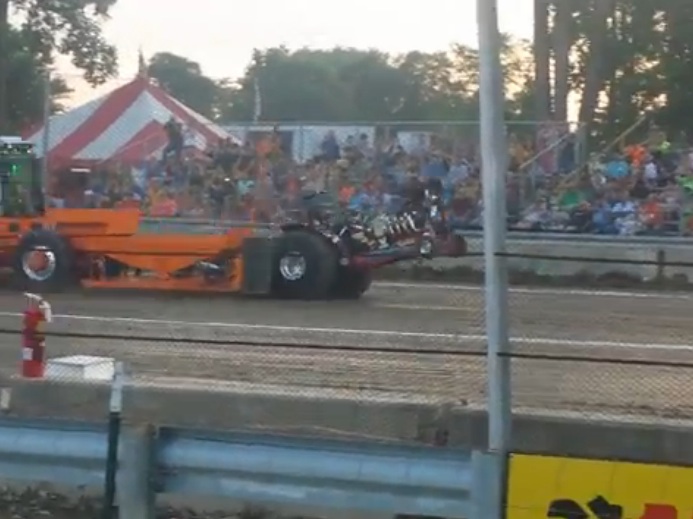 Yesterday we showed you a video of a mini-rod tractor getting out of shape and the sled kind of taking over the action and steam rolling the poor machine (along with the driver in it) so that prompted reader Logan Mayer to send us a video of a tractor called the Whompass Express suffering the same (if not a more violent) fate. The issue that the Mini-Modified suffered yesterday happened again here where the machine gets into an almost harmonic bouncing and the driver is left with little to no option other than hanging on for dear life and keeping his foot planted because if he lifts the sled will run his ass over and if he doesn’t the sled will probably run his ass over anyway. That’s a pretty heavy moral dilemma and frankly we can’t blame either driver for keeping his boot to the floorboard.

While is seems like tractor pulling is a sheer blunt force trauma kind of deal, it really isn’t. There are lots of subtle variables like weight, gearing, wheel speed, and the actual material makeup of the track that factor in to how these things are setup and the run you will see here was probably pretty close to being a gnarly pull. A few more pounds of weight on the nose, a slightly different clutch setup, etc and you have an awesome hook. Miss it and you have this.

The other thing to consider is how short the wheelbase is with these Mini-mods and how much wheel speed they are generating. The guy’s feet could stretch to the top of the injector hat if he wanted them to. When a big tractor has a bit of an attitude problem there’s all that twist and turn to settle it out. When a mini-mod gets pissed it gets pissed in a hurry and you can see it here. We think that this dude gets it worse than the guy from yesterday.

Ebay Find: This V8 Pinto Could Be A Lot Of Fun! Burnout Contests, Here We Come! This 1941 Willys Is The Last Vehicle You'd Expect To Find For Sale At A Volvo Dealership!