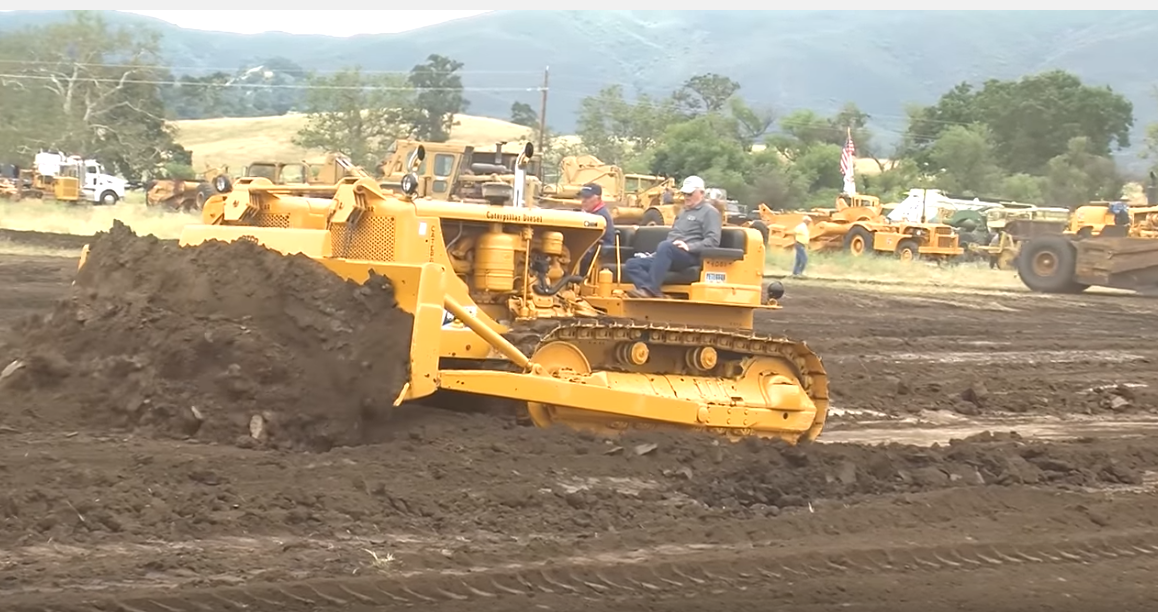 (By Greg Rourke) – Brian recently showed us the Euclid TC-12 bulldozer. Apparently it was a nightmare as far as reliability. It turns out if you needed an XXL dozer in the early 50’s, you had another choice. Maybe the TC-12’s reputation preceded it, or maybe you just didn’t like green, or just liked Caterpillar. Here we have the Siamese Twin D-8.

Built by Peterson Caterpillar in San Leandro, California the Twin was the answer for those who really needed to move a great deal of whatever was in their way until the D-9 came out in 1955. As the name suggests, it was two D-8’s joined side by each, and a very enormous dozer blade stuck on the front. They had a few different configurations, including a high clearance model for clearing trees. It could knock down 40 foot high trees and shove them 300 feet. The coal model could move 25 yards of coal at a time. The Super Push prototype had a 22 foot wide blade, and was field tested at a dam project in Montana.

Most of you probably are aware of the “pony motor” starter Cat used, a two cylinder gasoline engine was used to crank up the big diesel. The Twin used one pony motor on the right engine, then once it was running a clutch was engaged to fire up the left engine, the most powerful pony motor ever. Further trivia: these old Cats didn’t have a hydraulic system, but raised the blade via a winch on the back and cables running to the front.
Is the tractor in the vid one of the only three built in the 1948-53 era? Nope, it’s a re-creation commissioned by a guy who must really love yellow iron.
The Rodentia Hotel: Saving A 1971 Oldsmobile Cutlass, But At What Cost? BangShift Question Of The Day: What Is The Best Innovation Created By An American Car Company?