A Freak And A Failure: The Sad Story Of The Coolest Tractor Ever Made, The Minneapolis Moline UDLX Comfortractor 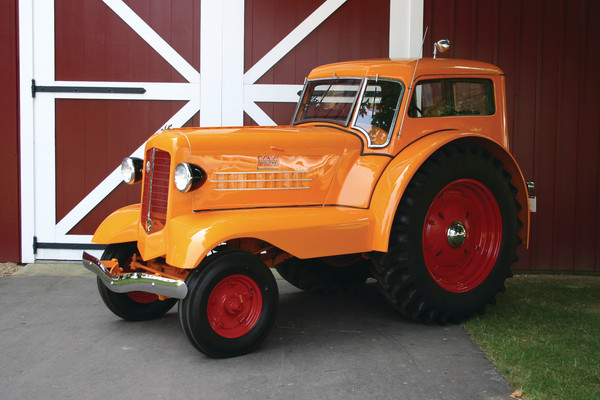 A car, a tractor, and an epic fail. All three things describe this motorized freak, the ’38 Minneapolis Moline UDLX Comfortractor. In a twist of irony it is one of the most valuable collector tractors out there because of limited production, looks that come right out of a kids story  book and the story you’ll read below.

This monster was introduced as the solution for 1930s farmers who had to operate their equipment out in the elements as nearly every tractor made at the time was sans cab, so every farmer needed to own both a car or truck and a tractor. The UDLX was set to make life a whole lot better for farmer Jones, and on paper it did. We all know how that goes.

So let’s talk about the positives before we get into what exactly sunk the UDLX. First off, it was equipped with all the things the typical road-going automobile had at the time. Stuff like a heater, a cigarette lighter, full instrumentation, a glove compartment, and a radio were standard equipment. The cab was also included in the deal. This was revolutionary stuff when you consider that the next closest thing for amenities on other tractors were canvass sheets that attached to the outside of the body and funneled heat out to the open cockpit where the driver was freezing his ass off.

Powered by a 425ci straight six-cylinder engine that couldn’t have made whole lots of horsepower because it sported a compression ratio of 5.25:1, there was a high enough gear (a 1:1 5th with those massive rear tires) to push this 6,500-pound beast over 40 mph while running at its 1,750-rpm redline.

This tractor/car had no suspension and only some weakling manual rear brakes. The horror of hitting a bump at 40-plus mph probably kept the sane owners to more moderate speeds–that and the constant blood-curdling screams from their wife in the jump passenger seat.

Another thing to consider when looking at the UDLX is the blind spot the driver must have had. The very long nose and extremely high driving position meant that kids, most livestock, and frankly, all known, normal, automobiles would be invisible if they dared stay directly in front of the tractor. The top of the grill is roughly to the roofline of a stock Model T, or about 6 feet high. Built before the days of crash tests, it’s safe to say this tractor could drive through a row of brick buildings (with the brakes on) before finding something stout enough to stop it.

So with the neat styling and all the zooty features it must have been a hit right? Wrong. It failed hard. First shown to the public at a massive 12,000-guest unveiling, even the initial reaction was one of shock and distain, not enthusiasm and curiosity.

The basic problem, like so many others, started with money. A $1,900 price tag put it about $1,000 dollars more than the next tractor in the product line and farmers tend not to be known as luxuriant spenders. Salespeople tried hard to convince the potential buyers they’d be ahead of the money because they would no longer need a passenger car, but people simply weren’t buying it, literally.

Access was another problem. The operator had to scale the rear of the machine and wriggle himself into a drivers’ seat that a 9 year old boy would find cramped. After reaching the seat, the enclosed cab became the next nuisance. Because the machine was so noisy, riding the cab was like sitting inside a base drum with the symphony playing. Owners may well have been craving the days of being rained and snowed on again once they spent time in the loud, hot, cramped cab.

After producing an initial run of 150 Comfortractors and only selling 100 (a bunch of which were built as “sport roadsters” with the same fenders and body minus the cab) the company sent the remaining 50 back to the factory to be converted into regular U-series tractors, thus ending the UDLX story in it’s tracks.

These babies have sold for more than $100,000 at auction and frankly we’d pay it if we had it. Imagine getting a set of plates on this machine and driving it into a car show, or over a car show, whatever.

Yes it was a failure, but what a glorious one. Know someone who has one? We’d love to run a BangShift.com road test on it! 7 thoughts on “A Freak And A Failure: The Sad Story Of The Coolest Tractor Ever Made, The Minneapolis Moline UDLX Comfortractor”