Motorized Freak of the Week: The LeTourneau L-2350 – W/Video! 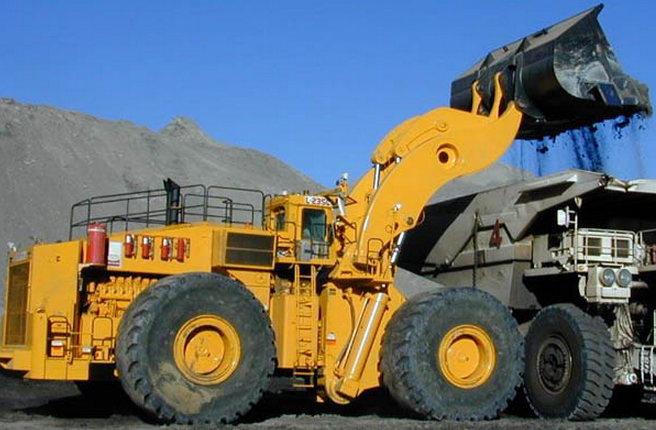 This week’s freak hasn’t been chosen because it was a failure, quite the opposite actually. This thing is a (literal) huge success. The LeTourneau L-2350 is the largest front end loader in the world. It can move Earth like no other wheel loader out there and because of that, it has earned freak honors on the pages of BangShift this week. If it means anything, I’d do some pretty shocking things to get a shot behind the controls of a machine like this for just 10 minutes. That’s all I am asking. This LeTourneau is the undisputed champion of huge in the front end loader world.

This is not a machine you stumble on at a construction site. It’s used in the mining industry, and if put into the wrong hands, the country-destroying industry. The bucket holds up to 70  yards of material, so when you consider that a normal tri-axle dump truck can carry about 25-30 yards of material at a whack, you realize that this thing would swallow one whole. In terms of weight, it’ll lift 160,000 pounds per scoop.

The manufacturer recommends matching this machine with a 240-400—ton dump truck to maximize efficiency. To think that one guy is turning the wheel and pulling the levers on this thing is mind blowing. Talk about developing a God complex.

There are two choices of powerplants. One is a 2300hp Detroit Diesel displacing 4,600 cubic inches. It makes peak power at a screaming 1,800 rpm. The second is a Cummins unit that makes the same amount of power but spins to a stratospheric 2,300 rpm to churn it out, which makes sense because it’s a 2,800ci small-block.

The top speed is a death defying 10.5 miles per hour. Sounds slow, but the machine weighs 598,000 pounds, so hauling it down even from 10 mph would require a large amount of real estate.

Here are some more numbers for you. The fuel tank holds 1,050 gallons. The cooling system capacity is 130 gallons. Oil changes would be pretty expensive as the oil capacity is 66 freaking gallons. The transmission holds a measly 7 gallons of fluid.

While we’re normally not a fan of big-inch wheels, the 60×57-inch units on this machine look right at home.

LeTourneau Technologies of Longview, Texas, manufacturers these machines along with bulldozers that could back over this loader and not feel all that bad about it. It’s mind-blowing stuff.

While we often get down on the fact that manufacturing and industry in this country seem to be leaving the building like it’s on fire, we’re still a people capable of amazing things. These machines and LeTourneau Technologies are proof of that. It also backs up the age old adage that everything is bigger in Texas.

Hey SilverBuick, got one we can take for a spin? Watch This 1980s Apache Off Shore Racing Boat Skip Across The Ocean Like A 2,000hp Stone Pucker Factor Ten, Captain: The Armco Barrier Saves This Rally Team From A Cliff Dive!