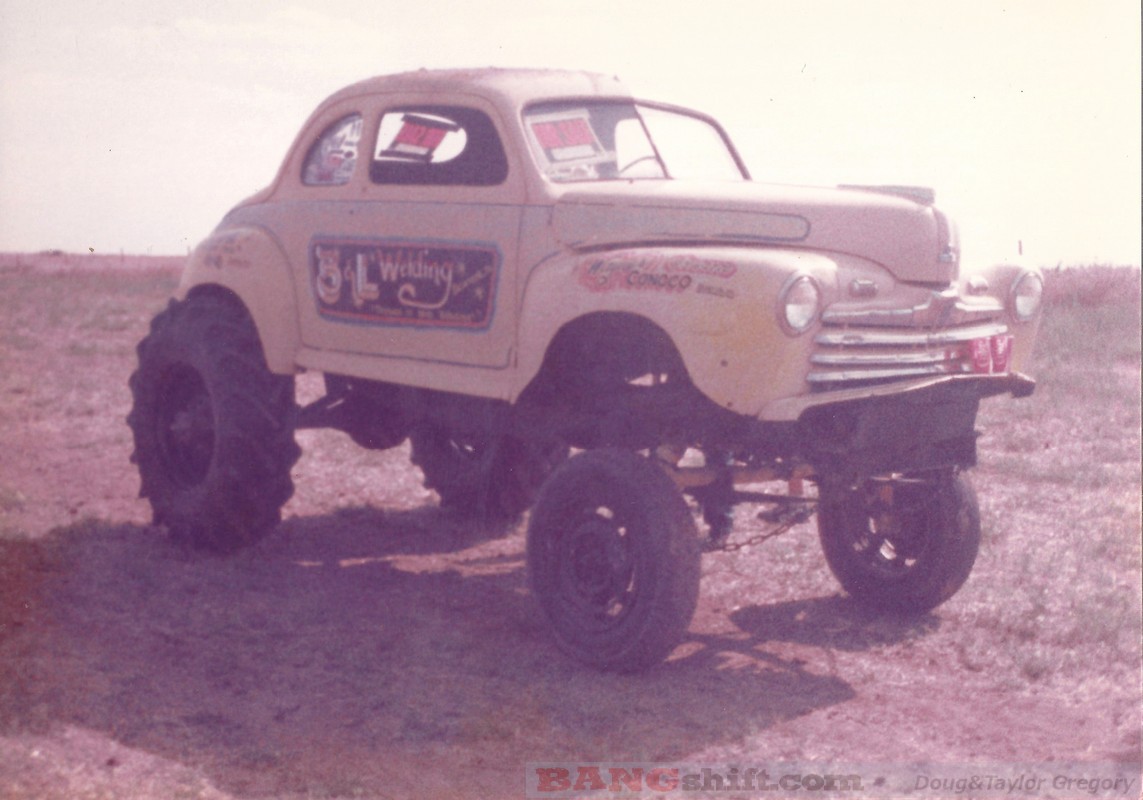 (Words and photos by Doug Gregory) – Part one of our expedition to yesteryear takes us to Perry, OK.  Situated just off Interstate 35, Perry is home to the Cherokee Strip Museum and the Charles Machine Works – maker of Ditch Witch equipment.

The location near Perry was a multi-use space.  Truck and Tractor pulling, mud racing, ATVs, etc went on there.  Perry was the first time I got to see Paula and Jim Harbuck in their ‘Master of Disaster’ mud machine.  Though Paula hadn’t yet reached the zenith of her mud-racing fame, she came ready to race and win.  Back then their Chevy Luv ran cut tires mostly and the top-of-the-line back then was the Ground Hawg.  I can remember debates about the best big tire for this and that both in the pits and on the streets (because – you know – a good ole boy needs serious mud tires for his lifted, 99% street-driven pickup).  The Gumbo Monster Mudder was another big hitter that many ran.  Scoop tires weren’t all that common around then and I do not remember why.  Sometimes there wouldn’t be many show up to run in the paddle tire class and they cut tire rigs would run there too….and sometimes beat the scooper-equipped rigs.

More two-wheel drive rigs in here.  There’s a colorful Corvette (with matching tow rig) I believe came out of Enid, OK.  The ’Lil’ Monster’ Luv makes another appearance in a low-slung, mud-racer version.  ‘Double Trouble’ was a unique rig for the day with a rear-engine configuration.  Don’t shoot me because I snapped pics of the Ford coupe or the Chevy II two-wheel-drive competitors.  I certainly don’t condone that kind of thing today, but no one was thinking about conserving real steel back then.

For those not in the know about mud pits back then – sometimes the mud was very deep and well-stirred.  Sometimes it was a mucky, sticky mixture of clay and water that was very inconsistent from end to end.   Eventually what started as ‘mud bogging’ evolved into ‘mud racing’ and the depth decreased as did the consistency of the ‘mud’.  The pits featured in these galleries are typically inconsistent and DEEP.  Often the smaller rigs ran first and that progressed into the larger stuff.  Typically your fastest-class vehicles with paddles or cut tires were last to run so they had to navigate large ruts and mounds pushed up by vehicles being sucked down in the same spot.  It was certainly exciting to watch.

I’ve included shots of some pullers assembled during one event including the Landwehr’s ‘Stir Crazy’ pulling truck (as a Commanche in this version) and their ‘High Risk’ monster truck.  Good times.

Cruising Memories: Joe Grippo Takes Us Back To Pottstown, PA Circa 1993 And A Nationally Recognized Scene (Videos) Unique Beauty: Check Out This Unique 1961 Vignale Bodied Corvette And The Story Behind It