It has been too long since I have had some garage occupancy for my own fun and entertainment. That’s been rectified and in the typical fashion of my life, I couldn’t just do the normal thing. In truth I have looked at, kicked the tires on, and negotiated on a few cars and trucks since I ditched Buford and Brutus the Wrecker but nothing really spun my crank hard enough to pull the trigger on. Then I saw this little Ford N-series tractor for sale and the want meter pegged. The tractor looked clean enough, the rubber looked solid, and with creative packing it would fit in my garage at the house, giving me a great place to work on it. As I got to thinking about the tractor and going to see it, I also got obsessed with looking for a flathead V8 to perform a swap. Again, going back to my childhood of driving my dad’s 8N and then seeing books with pictures of Funk and other conversions with V8 power, I finally got the gusto to make a deal happen. I snagged me a tractor and then found an engine.

As you’ll find out here the tractor is quite interesting, has some neat stuff, and clearly some working history. The engine is an even cooler story and further proof that this is the right project for the right time here at the BS Eastern World HQ.

Lastly, before we get into the good stuff I wanted something to wrench on with my boys that would not overwhelm them. This is going to start a good series of “stepping stone” projects that we can do together. Tractors are very basic rolling examples of the mechanical world. The lessons will be basic and they will be hands on, setting a good foundation for their future wrenching and curiosity.

Henry Ford loved tractors. He might have loved tractors more than he loved cars. The N-series was a masterstroke. Like the Model T they were the right size, the right price, and the right functionality for a massive swath of farmers across America. Built in the 9N, 2N, and 8N, varieties, these tractors had a combined production of nearly 1.5 million units. In 2001 a comprehensive research study and survey was completed to indicate that somewhere between 25-40% of the tractors produced were either still intact or actually still working. Count mine among them. Because of this, the availability of parts and pieces is not only awesome, it is mind-boggling. There are multiple suppliers that would allow you to nearly build an N-series from scratch these days. 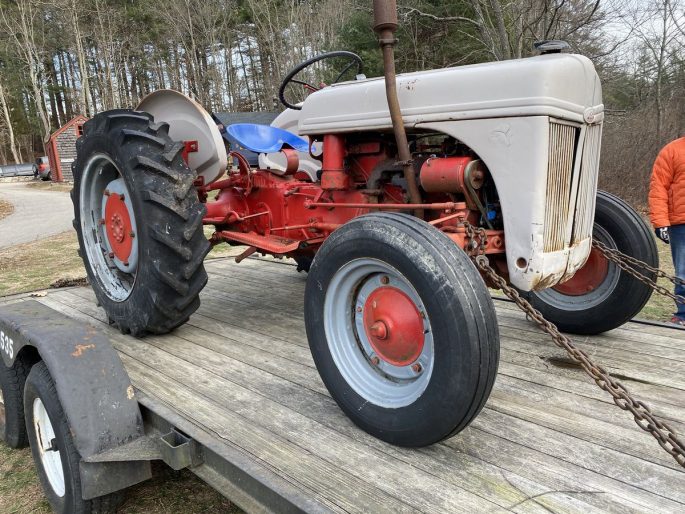 So this tractor, as you are going to discover is not one thing. It is an amalgamation of parts from all three generations of N-series tractor but to set the scene for you, this is a 107″ long, 3,000lb, machine that is two wheel drive, has a three point hitch, a 20hp four cylinder flathead engine that currently does not run, and it uses a 6-volt positive ground electrical system.  It has a four speed manual transmission and is equipped with a rare Hupp auxiliary transmission that gives it multiple ranges.

My connection to these goes back to my youth and even recent history. My dad owned a 1952 8N with a front end loader that was a snow moving machine which I spent many snowy afternoons on. That tractor was the first vehicle I think I ever fell in love with, so consider this a bit of revisitation to the past. 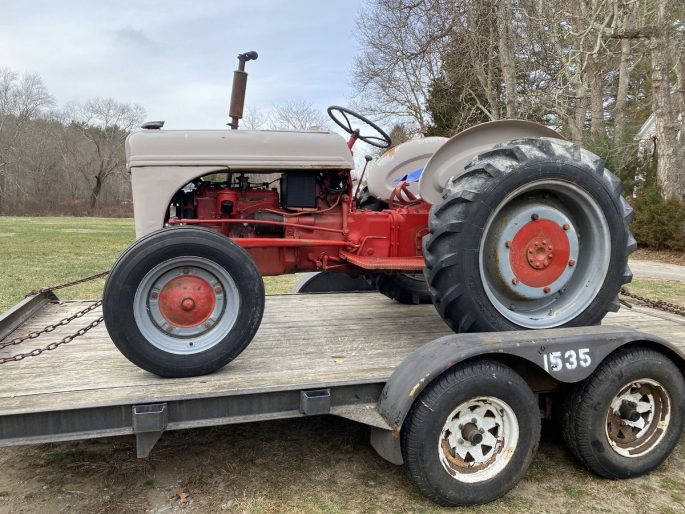 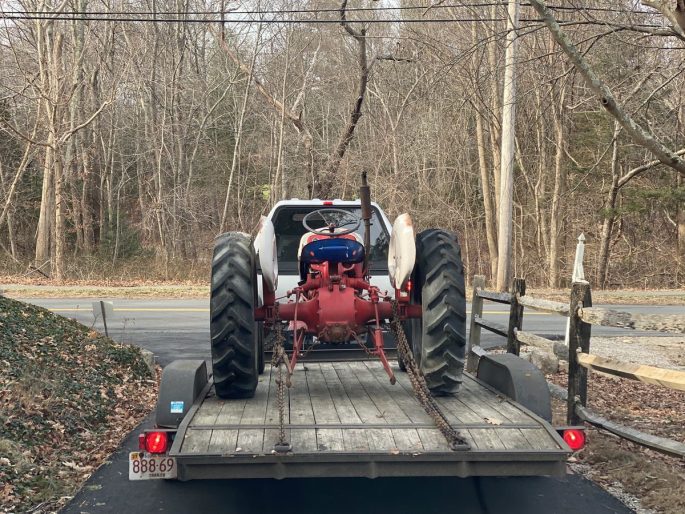 The details and what makes it interesting – 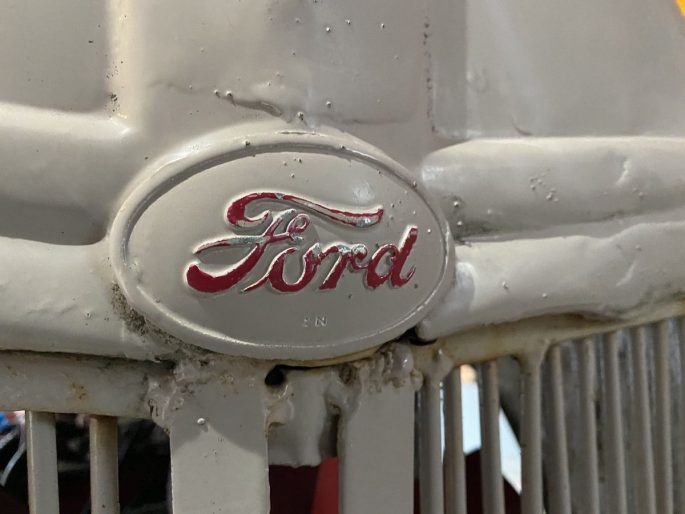 The seller had this tractor listed at a 1947 2N and with good reason. It does have 2N parts on it, like this nose/cowl. Note that the ONLY real outward mention of 2N is the tiny hand stamped alpha-numeric deal under the Ford script. For this reason the guy I bought it from was under the impression that it as a 2N. Makes sense. Yes, the nose is welded up, beat up, and has lived for more than 70-years. It will get some attention. 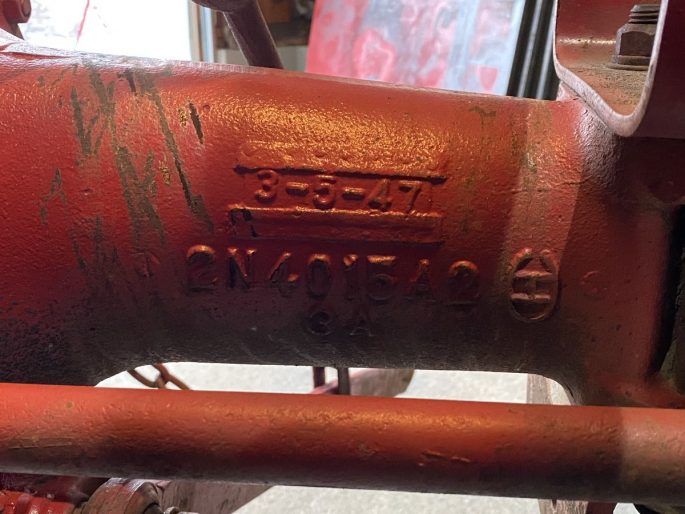 More reason to ride the 2N train! Clearly we can see the axle was cast on 3-5-1947 and we know that 8N production did not start until 1948 so this is again all 2N all the time back here. It should be mentioned that the big shaft in the foreground is what actuates the mechanical brakes. O0ga booga! 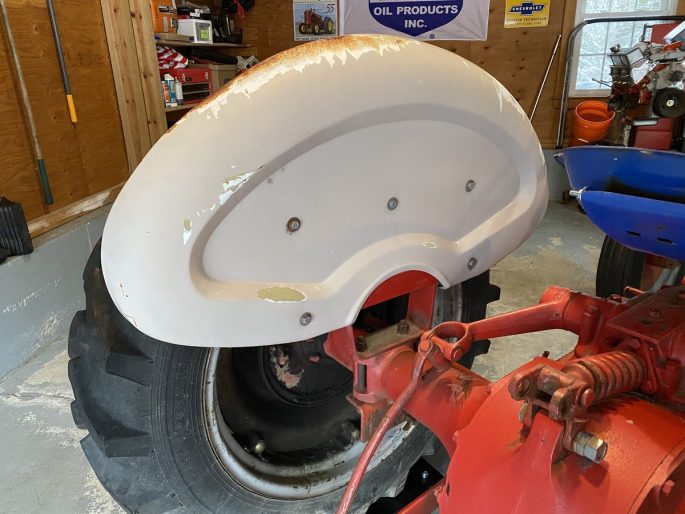 Here’s where our story takes an interesting turn! These are fenders from a 1965 model year Ford tractor. While they have a similar top curve to the N-series stuff, the big flat indent should not be there and there should be a raised Ford script on the top. Now things are getting good. Mystery! Hey, someone got a deal on these while they were putting the thing back together and bolted them on. They’ll be gonzo for proper ones down the road. 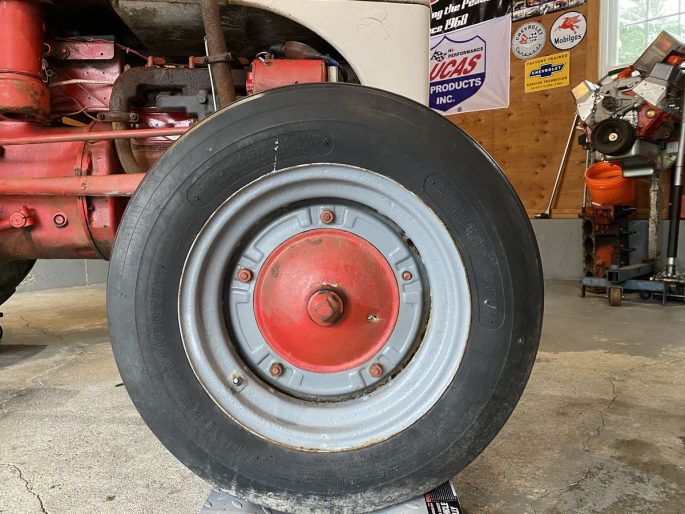 Back on the 2N story, the tractor has proper 2N wheels on all four corners. 8N wheels had some contour to them, especially the rears. These are the more plain and earlier 2N jobs which fit the nose and axle part of the story here. 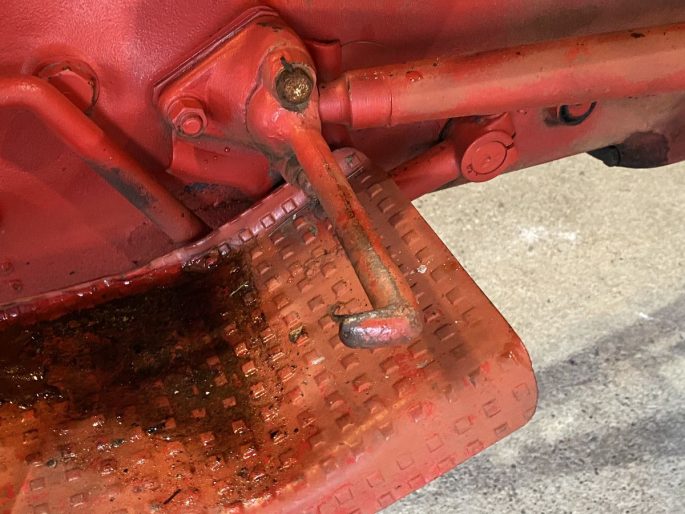 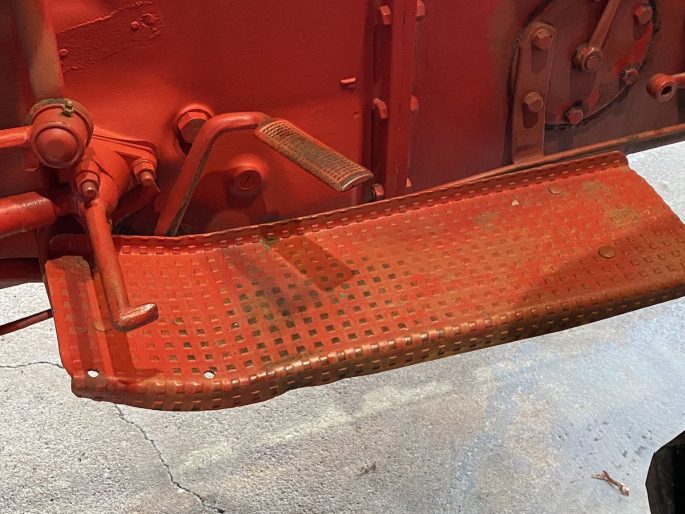 Now we really get into the 8N/2N cross breeding story. So the 2N tractor was never offered with running boards. Those were an innovation added with the 8N series after 1948. The 2N only had foot pegs so the operator had nowhere to put there feet other than the pegs which is kind of dangerous and likely really uncomfortable after a short time. This tractor has both. The running boards were added at some point but the foot pegs stayed. Why? They are integrated into the radius rod mounts. I think these will stay even though we can get 8N mounts. It is just confusing enough to people to be awesome. 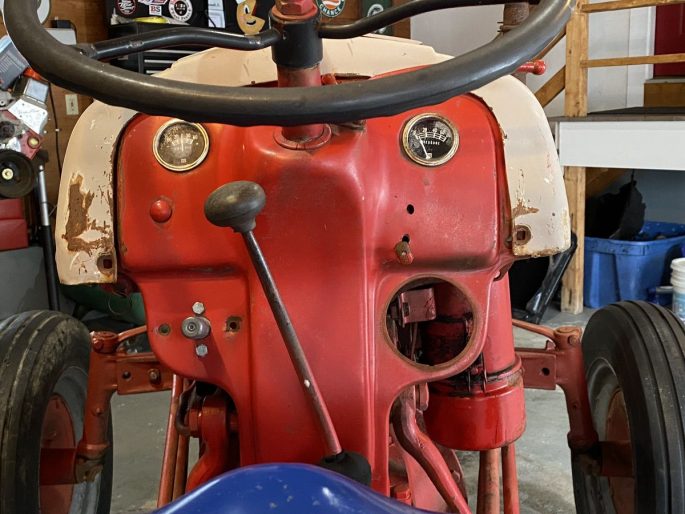 The tractor has an 8N dash behind that 2N nose! How do we know that? Well, the 2N dash pinched down quickly below the steering column and had no provision on the lower right for the Ford “Proofmeter” which is what is supposed to be in that gaping hole. We’re going to add the Proofmeter which is a tach and hour meter. They look cool and are available cheap (like virtually everything else!). Once we get the thing running we’ll know if the oil pressure gauge and amp meter work. 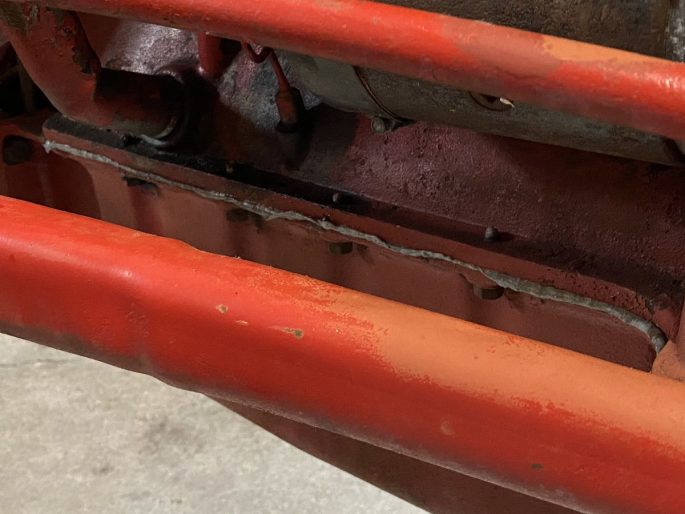 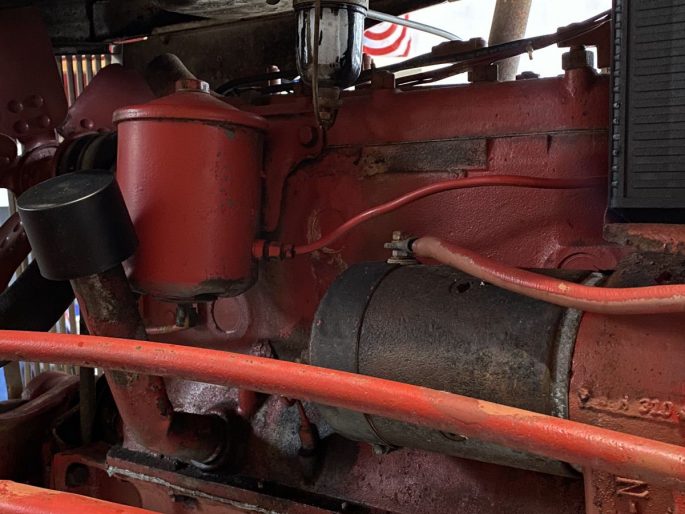 The engine is also from an 8N tractor, so we’re starting to get a clearer picture of what happened along the way with this unit. Someone scrapped the entire running gear from a 2N ahead of the axle and swapped it with 8N stuff! This engine is virtually identical to the other 9N and 2N engines but we know it is an 8N because of the flat pad to the right of the oil filter at the top of the block. 9N and 2N tractors had their numbers cast into the block, in this case the 8N blocks were hand stamped in that little pad. Time has largely erased the number off that pad. If this were going to be a legit restoration it would be good to know that. Eventually this rebuilt engine will go to the highest bidder. It’s cool that this engine has ben redone. You can see the sealer on the oil pan flange, there’s a fresh head gasket and peering into the spark plug holes reveals pistons clean enough to eat off of. 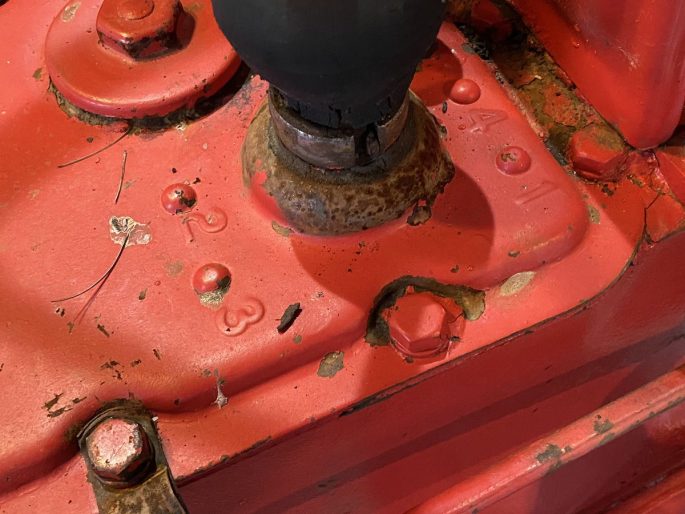 Here’s the part that made my eyes bug out when I went and first looked at the tractor. It has a four speed! 9N and 2N tractors were all three speeds. I was kind of bummed that I was going to settle for a three speed but when I got there and actually looked it over my heart was going pitter-patter. Fourth gear is good for about 12mph in this thing which is as close to a road gear as you have unless there’s additional help….and there is additional help. 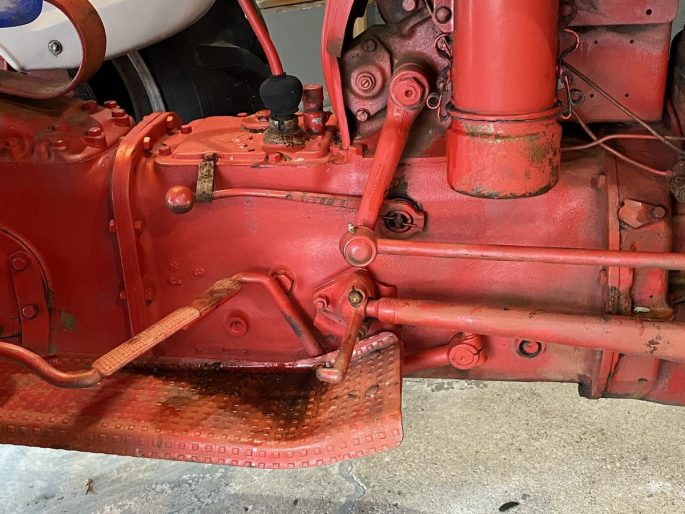 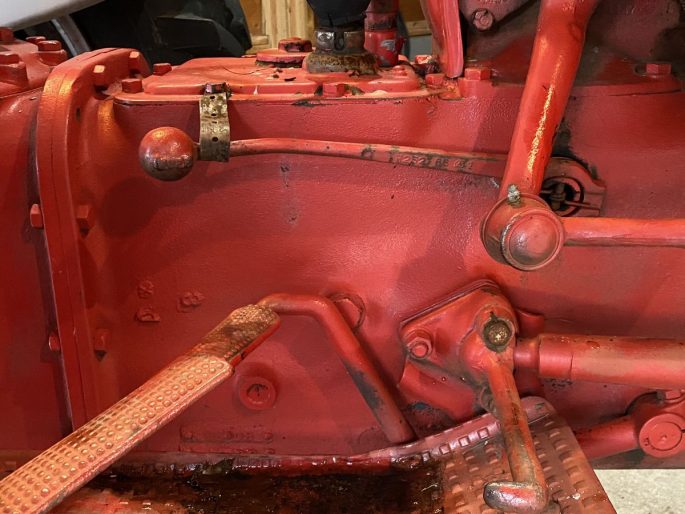 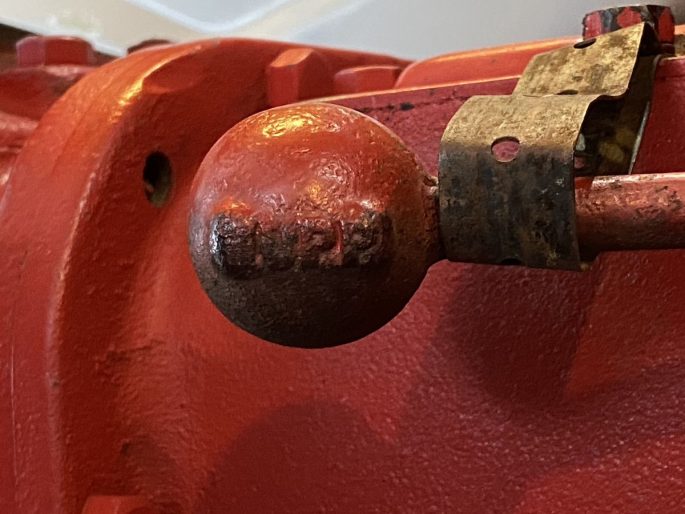 That shifter is attached to an ultra-rare Hupp auxiliary transmission! Yes, there is an additional set of ranges available now and according to the math, in fourth gear high this thing should made like 25mph with the stock engine. The fact that shifter is “locked” in place may indicate a problem but we’ll deal with that when we get there and perhaps we’ll have to split the tractor to rectify it. No matter, it is radical to have this unit as part of the deal. There were a couple of companies that made these. Sherman most famously. The Hupp is a good one and it will be fun to stretch this thing’s legs a little! 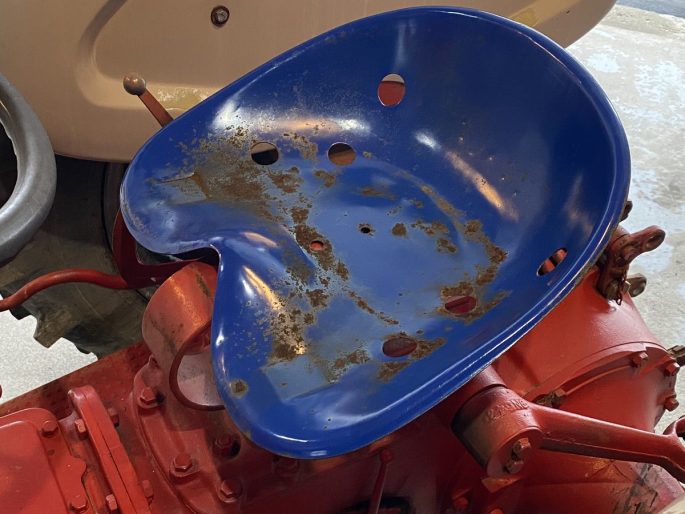 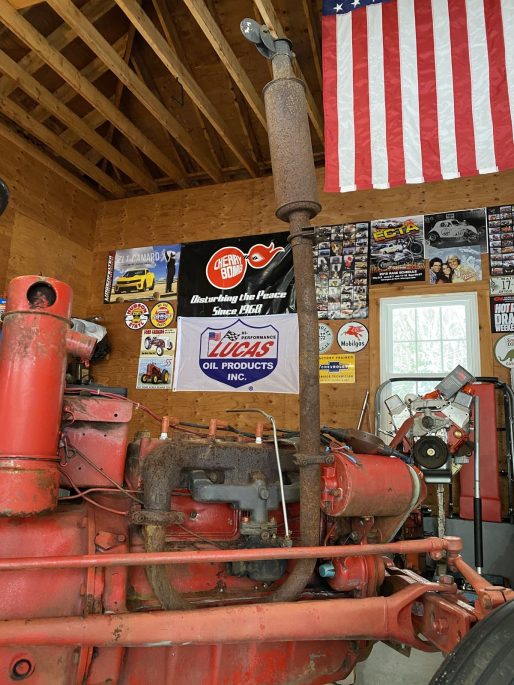 Two things that are just kind wrong here are the blue seat and the exhaust stack. One of the cool things about these tractors is how clean they looked with the exhaust running down and back under the axle. Someone added the stack and it was their taste but it ain’t mine. There’s a factory exhaust already on the way to remove this periscope looking thing. The blue seat? We have no explanation other than the dude ran out of paint early and just said screw it. We’ll bet handling that right quick as well. It hurts the eyes. 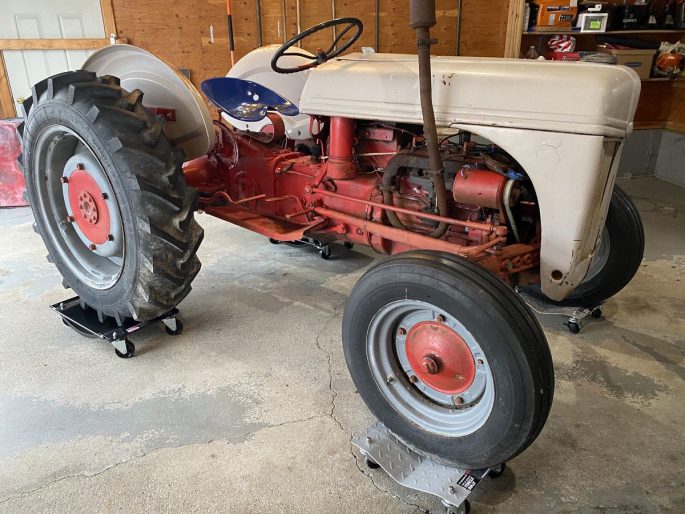 So here’s the scene the day we brought the Triple H home. We were racing a blizzard that was to hit that night, so once the tractor was off-loaded I scrambled to Harbor Freight for wheel dollies and hoped that my tape measure did not lie to me. It didn’t! The little tractor on the dollies fit just where I knew it would in the corner of the garage and all the family fleet was nestled into their spots for the evening. We got about a foot and a half of snow that night and the next day was spent digging out and preparing for a short road trip the next day. For what? Horsepower. Here’s the big piece of the fun puzzle. Thanks to Jay Holdash the “search” for a suitable rebuilder flathead was really short. Jay had taken this engine apart years ago and just never found the right project to plug it into. He was happy to clear out the corner of his workshop and I was happy to find such a good new plant!

You are looking at all of a Ford 8BA flathead V8. It was a reasonably common swap to make back in the day to take your 20hp tractor to a 110hp tractor with the addition of the four additional cylinders and Henry’s little legend of an engine. That’s the plan for this tractor. The flathead will be a stock rebuild (guessing a bore job to clean up the cylinders) with a little camshaft it make it lumpy and fun. The idea is when all is said and done to have a factory appearing tractor with the barky little V8 making noise and power under the cowl. Why? Because I have always wanted one. For no more or less reason than that.

Way more to come on every front of this project. Way more.