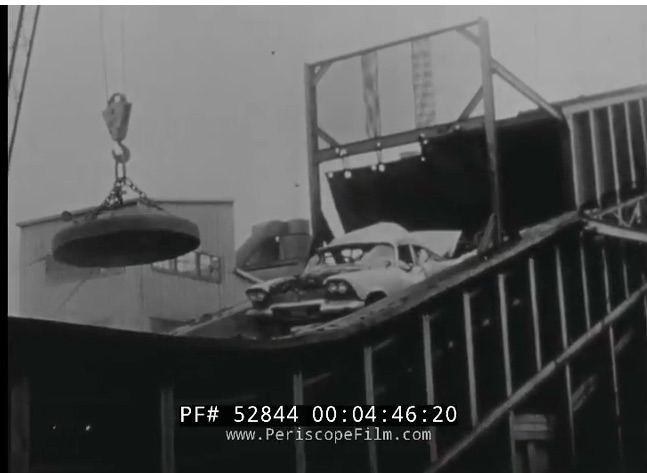 Up until Hymie, Izzy, Jackie, and Izzy Proler came up with the idea of creating a massive plant that would take junk cars back down to their base elements, the process was draconian. Junkyards would set fire to the interiors of the cars to burn them out and physically chop them up with acetylene torches. The work was brutal, it was dangerous, and it was barely profitable. No one was suffering for this more than England, apparently.

This video was made by the Proler Steel Company to promote the fact that one of their bad ass automated car dismantling plants was going to be built in England and it was going to save the country a lot and we mean a LOT of trouble. Made in the early 1960s the video paints a stark picture of junk cars filling the alleys, the streets, and even areas on the side of the road in the UK. We don’t know if it was as bad as it looks in this video but damn, it as ugly.

Enter Proler steel. The four brothers developed the versions of plants that are still used today to take whole cars and turn them into little chunks that steel makers want to recycle. No more burning out interiors, no more guys chopping their own limbs off with torches because they slipped up on the job. Roll the car in, grab it with a grapple, drop it on a conveyor belt and let the destruction begin. In this video the narrator revels in the fact that the whole car is gone in like 15 minutes. Modern versions of these plants do it in like two. It is all about horsepower and speed.

While the video was intended for England and parts of it were made there, the majority of it was made in America because that is where the existing plants were at the time. This means you are going to weep seeing some of the primo American steel head to meet its violent demise. OUCH!

Proler Steel is still around and as best we know, their plant design is still the one preferred in the industry.

Listen To A Cool And Rare Detroit Diesel 1-71 Fire Up And Clatter Away - How Neat! The American Powertrain Parting Shift: Meet America's Most Unique Truck - The Three Trans Equipped Holy Smokes!