Ramp Truck Battle! Would You Buy This Sweet 1963 Ford Cab Over Or This Equally As Sweet 1966 GMC? State Your Case! 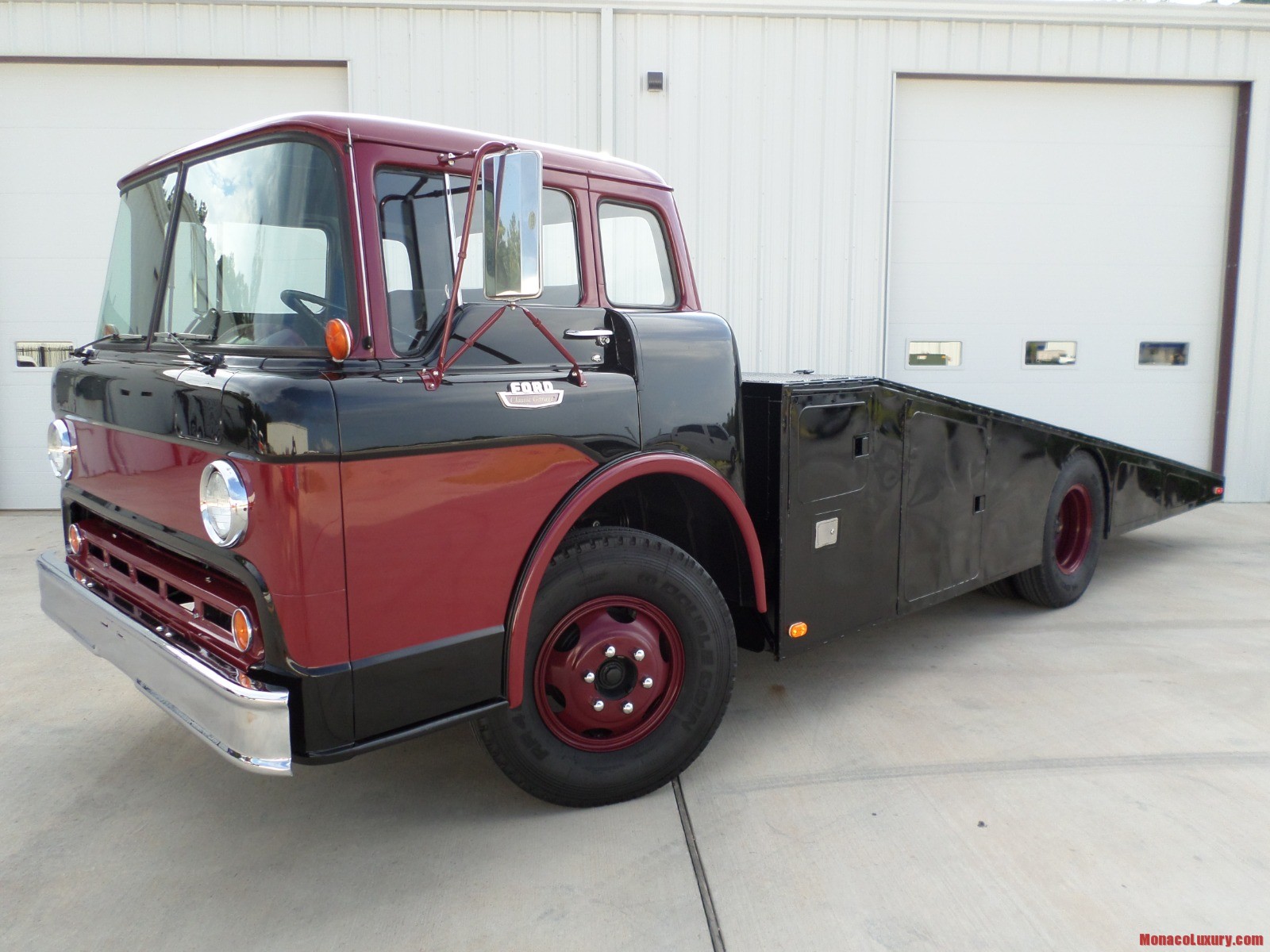 This will likely turn into the Hatfields and McCoys right quick. I went out and found two of the coolest ramp trucks I have ever put on BangShift and I am sticking them both in the same blog item and making this a head to head battle for popularity. It has all the lines of a great fight. The opponents are similar in style. They have differences in power, differences, in approach, and they they are both packing enough heat to win….I think. Clearly one will be chosen over the other in the comments section down below but please look at both sides before casting your ballot. This is important stuff and we don’t want a rush to judgement here!

In this corner we have a 1966 GMC 4000 cab over ramp truck being sold by Bazz Young, the nostalgia funny car racer – 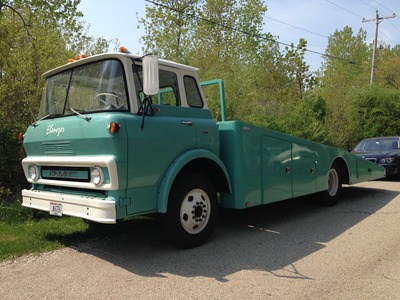 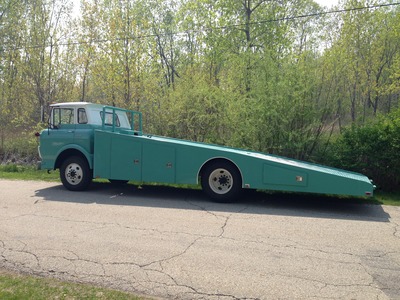 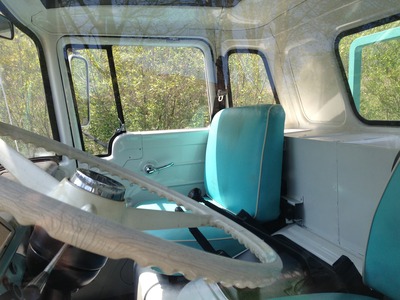 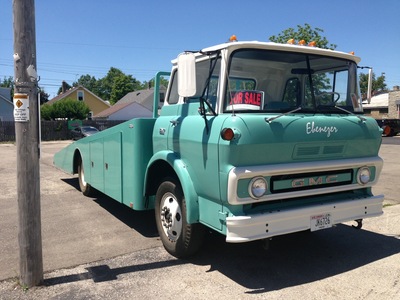 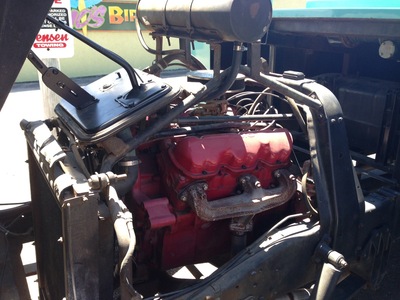 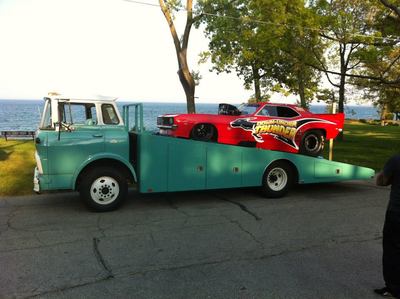 Seriously, just look at that thing. What a beautiful piece of race car hauler perfection. The seller is Bazz Young, the owner and operator of the Down Under Thunder Camaro nostalgia nitro burning funny car. We don’t think he actually hauled his car around the country with this truck, but it does look like he moved it locally this way. The Camaro sure looks good sitting on the ramp in that last photo, doesn’t it? The truck appears to have been restored at some point and while the color isn’t one we would go out and pick on our own, we could certainly live with it, especially with the addition of some vintage lettering on the doors to give the rig a little more character. Here’s what the RacingJunk ad says:

SO, THERE’S THE FIRST CONTENDER…..ONTO THE SECOND –

The second truck in this fight to the death is the immaculate 1963 Ford C600 ramp truck below! 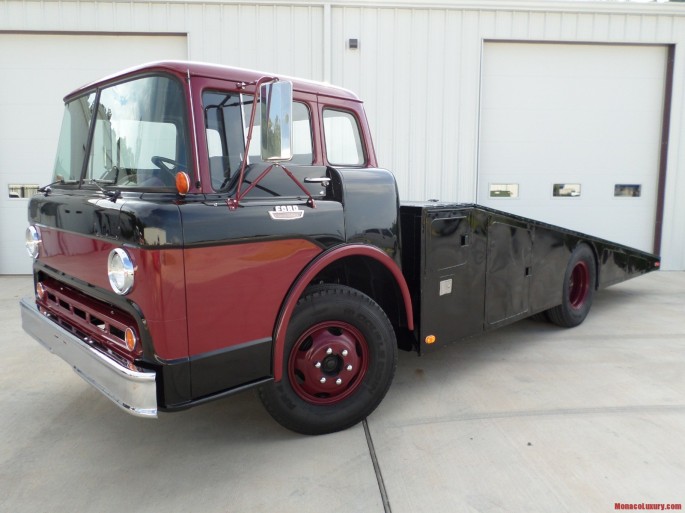 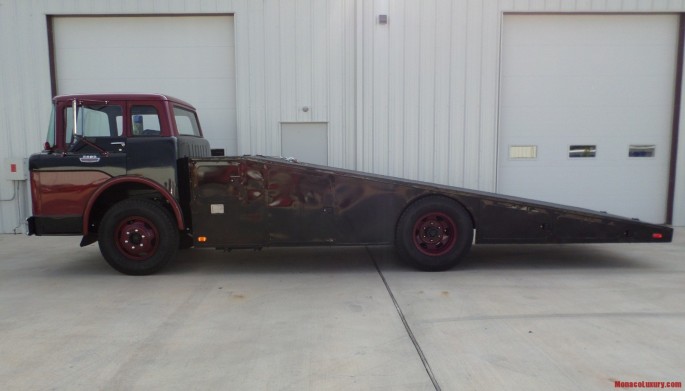 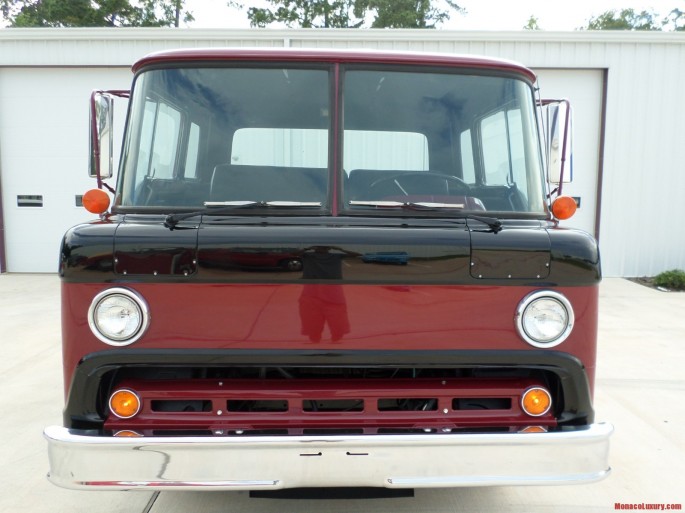 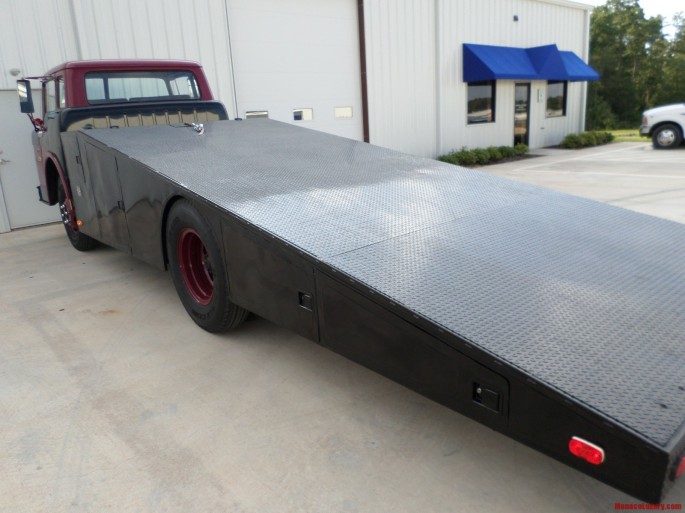 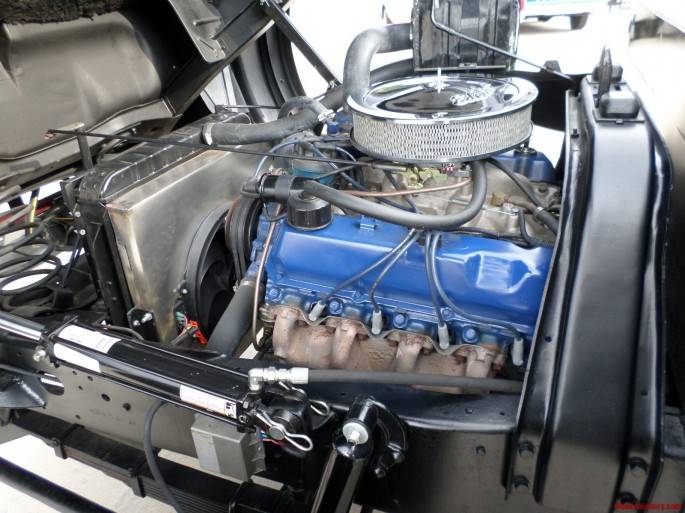 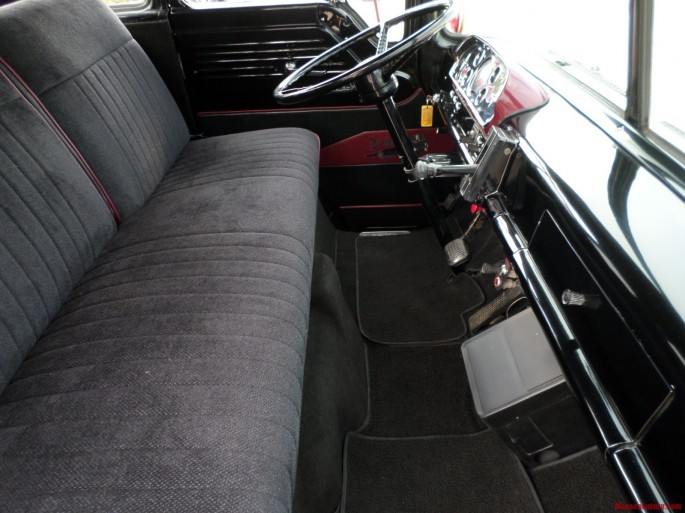 Wow, right? Just flipping WOW. This 1963 Ford has been restored and upgraded while retaining all of the stuff that makes it awesome as a vintage ramp truck. This is not one of those deals where the cab and body got jammed onto a modern frame and it is basically a new truck pretending to be old. Nope, this baby still rides on its original chassis and suspension, has a rebuilt 370ci FE truck engine for power, an Allison automatic transmission to do the shifting and a snappy new dual tone paint job to maintain a classy appearance. The cab has been treated to a nice new seat and the same detail work shown in the body and how nicely that was finished. This truck has a V8 while the other truck has the GMC V6, but keep in mind that the 370ci truck FE engine isn’t exactly a horsepower slayer as much as it is a low RPM torquer like the GMC. Super, super nice truck here.

The Ford C-Series was a medium-duty cab-over engine (COE) truck built by the Ford Motor Company between 1957 and 1990. While advertisers boasted of its versatility, it was used primarily  for local delivery, and fire apparatus. Many of the fire trucks came merely as cab and windshield models. In production nearly unchanged for 33 years, the C-Series was the longest-produced commercial truck in North America at the time  it was discontinued in 1990. Only the Mack Model R (39 years) and Kenworth W900 (53 years; still in production) have remained in production longer. As Ford started squaring off its vehicles in 1957, they finally gave the cab-overs their  own designs separate from the rest of the Ford truck lineup. It featured a small grille near the front bumper, with a four-pointed star emblem on each end, the word “F O R D” spelled out below the windshield, and had a cog-and-lightning  bolt crest emblem between the headlights. Variations of this emblem were found on many other Ford trucks during the 1950s and into the 1960s. The C-Series held onto this logo the longest. In a fashion similar to the Checker Marathon or  Volkswagen Beetle, changes to the C-Series trucks throughout its production were very subtle. If anywhere, many of these changes were identifiable by the changes in the cowl insignias and badging. For 1963, the C-Series was updated  with the same cowl insignias used by the rest of the medium- and heavy-duty truck line up. The logo had the word FORD on top of a trapezoid with the model number designation. This insignia was used until 1967. Also in 1963, Ford  introduced diesel versions of the C-series, as well as the N-series and Heavy-Duty F-Series.

Whether you have a small collection or an entire dealership, this C-600 provides the opportunity to arrive in true “classic” style better than any other. This custom-built car hauler was restored with no expenses spared by a restoration shop  and classic car dealership. The purpose of the build was to have a unique showpiece used to deliver vehicles to local customer and for transporting classics to and from shows. Space and money constraints forced the sale of the truck shortly after  completion which attests to the 250 miles currently registered on the odometer. This COE project started with a solid race car transporter and has evoloved into the frame-off restored beauty you have the opportunity to own today. Considering how  much work was done in-house at cost, the total of the expenses which accompany this sale add up to a staggering dollar figure. There are ramps hidden in the rear cargo area that you can drive up on and there is a belly-mounted Warn Winch  for those classics that decide to be difficult at times. Highlights of this build include; Rebuilt 370 Ford Truck Engine (replaced the original 292 Y block), Rebuilt Allison Automatic Transmission (replaced the original 4 speed manual),  New Brakes & Lines, Rebuilt Rear-end, New Wiring, New Redline Gauges, Cleaned & Lined Gas Tanks, Six Powder Coated 20″ Steel Wheels, Six New Doublecoin RR400 9.00R20 Tires, New King Pins, New Weather Stripping & Rattle Kit, Restored Steering Wheel, New  Paint, New Interior, New Window Felts, New Warn Winch, Cleaned & Painted Frame, Powder Coated Ramps, New Wood Floors in Ramp Bed, and New Lighting in Bed Interior. In summary, everything on this COE is new, fully restored and/or  rebuilt! I probably should have said that first and saved you some reading and me some typing. As you will see from the photos below, this is an unique Cab-Over custom car hauler that can be purchased for only $39,988! I personally attend several of the largest classic auctions around the US each year and have recently seen  similar 50’s-60’s restored car haulers sell for $40-70k. You can’t beat this price and, as often heard in the classic car community, “….you can’t built it for this kind of money.”

YOU KNOW THE DRILL! GET INTO THE COMMENTS SECTION AND TELL US WHICH HAULER WINS THE BATTLE!

22 thoughts on “Ramp Truck Battle! Would You Buy This Sweet 1963 Ford Cab Over Or This Equally As Sweet 1966 GMC? State Your Case!”