Aug 22, 2019Brian LohnesBangShift XL, XL VideosComments Off on Ride On The Nose Of A Worked Up Peterbilt Truck At The Wild Canadian Big Rig Drags In Quebec 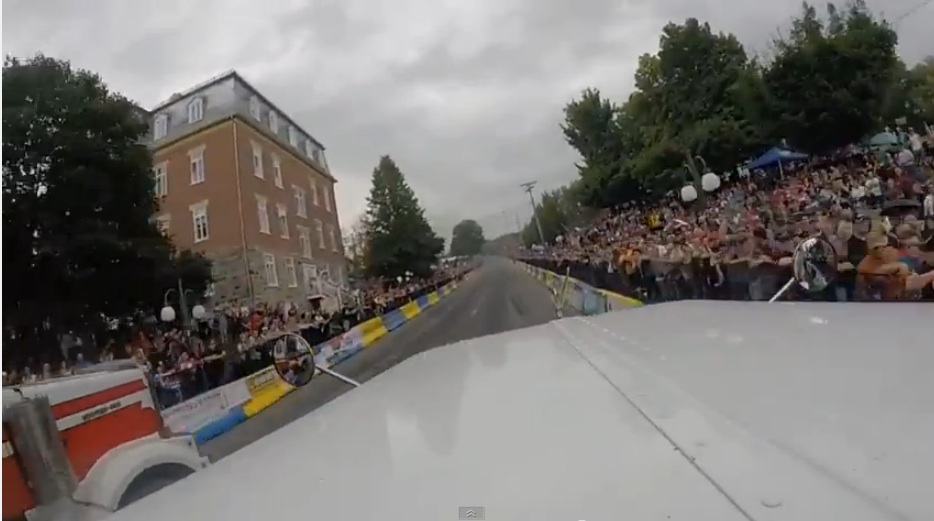 Since I missed another awesome rendition of the big rig street races up in Quebec, Canada last year and this year is looking bad, I have been trolling through video of the event watching all of the action that I once again failed to see first hand. Lots of the videos concentrate on looking down track to see the big trucks belching smoke and torquing their frames but the video below is pretty different because it uses the truck as a “camera car” for the lack of a better term. By attaching a GoPro to the hood of the truck, first facing backwards and then to the front we’re given a unique look at what it is actually like to pilot a big truck up a very narrow road lined with thousands of people time after time.

The truck that we’re riding on seems like a pretty stout rig. It is a Peterbilt and outside of that we only have the performance it puts in against other trucks as a valid mesuring stick and since he wins some races and loses others, we’re thinking that he’s a decent runner. If he got walked by all of the other racers on the video we’d have a different opinion but he lays a hurting on a few. Note how physically close the trucks are on the course. The narrow streets are made even more narrow with the addition of the crash barriers which would be thrown aside like Legos if someone lost the handle on their stuff while at a high rate of speed.

Pay attention to the sheer number of people that attend this deal. Virtually all of them are soaked in Molson and gorging on gravy fries all weekend so the crowd gets huge and rowdy watching these big beasts of burden race by. They also get coal miner’s lung by the end of the weekend but that’s just the cost of doing business, right? Anyway, I have wanted to attend this deal for years and each year find a new commitment that I have to be at during the weekend and 2017 was no exception with my working the NHRA US Nationals. This video is cool and has once again rekindled my intense desire to see this craziness go down in person!