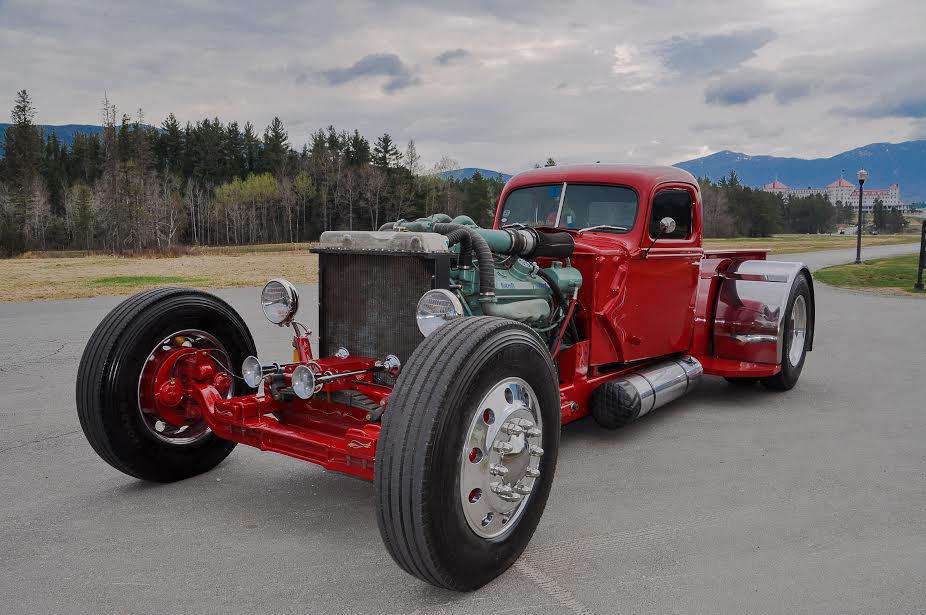 (Words and photos by Mike Bradford) – Jay Ouellette is the owner of Bumper to Bumper Auto Repair in Twin Mountain NH and like many of us grew up reading Hot Rod and other similar magazines yearning for the day he could get behind the wheel of his own ride.  That event happened when he was only 15 years old and he hasn’t looked back. Jay said, “I’ve been very fortunate in life in that I have owned just about every car and hot rod I’ve wanted to.  Fords, Chevies, Chryslers, a 426 powered Opel and a VW Beetle powered by a big block Oldsmobile just to name a few.”   He must have liked the big engine small chassis thing because for 8 years Jay was an authorized dealer for the outrageous V8 powered Boss Hoss motorcycle.

“One day a few years ago we were sitting around the shop and one of my guys Glenn Grammo asked me if I had one more build in me.  I agreed, but this one had to be way over the top and no cookie cutter.”  While scouring through the magazines back in Jays younger years, memories of the larger than life creations of “Big Daddy” Ed Roth were retained and brought back front and center for the big red machine featured here. 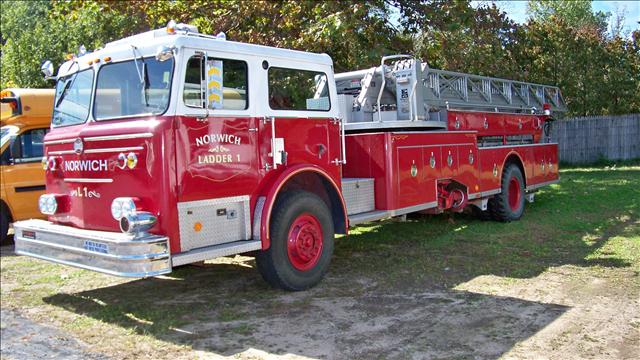 Here is the humble beginning of Jay’s 1979 Maxim fire truck which had a ladder reach of 100’. The Maxim Company was founded by Carlton Maxim in 1914 and they were built in Middleboro MA.

Jay explained, “I immediately knew that it had to be a diesel powered rig, not a little Cummins out of a pickup, but a true big block over the road class 8 diesel resembling something Big Daddy Roth would build.”   The search for a donor vehicle began and a decommissioned 1979 Maxim 100’ ladder truck was located with only 1600 miles on the clock.  “After buying it and driving it home, I knew it was perfect for what I had in mind.”  Powering the machine was an 8V92 Detroit Diesel mated to a 4 speed Allison automatic transmission.  In diesel lingo, the engine is 8 cylinders @ 92 cubic inches each for a total displacement of 736 cubes.  A Detroit Diesel is a 2 stroke design needing a supercharger to move air through the heads, but this bad boy has a huge factory turbo charger sitting on top of the blower for a bit more squeeze.  Power is rated at 424 hp. at only 1900 rpms and a stump pulling 1100 ft.lbs. of torque.  Jay also used the factory front and rear axles, the rear is a Rockwell filled with a 4:64 gearset which easily supported the 50,000 lbs. of firetruck. 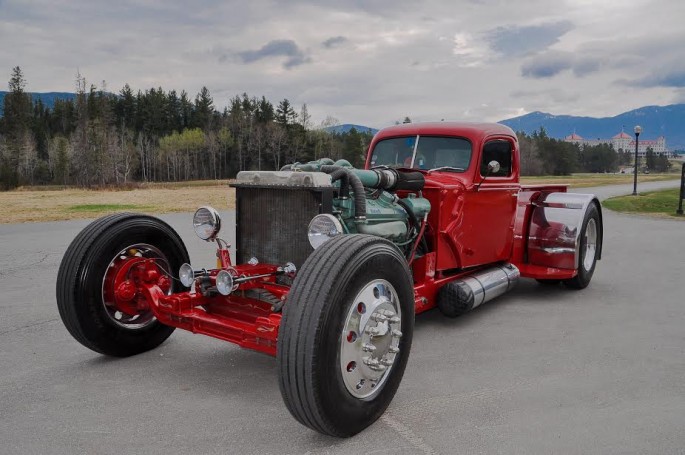 Nothing on this hot rod is small except maybe the windshield wipers.  Below the doors is a set of 20 gallon fuel tanks.  The 24.5 inch tires and wheels are at home on a tractor trailer.

Jay engineered and fabricated the frame out of ¼” thick steel, the electrics and plumbing.  The suicide front suspension mirror’s one of Jay’s ’34 Chevies, but on a much bigger scale supported by a custom spring rated at 5000 lbs.  Glenn did all the metal fabrication design and paint work. Fred Ingerson, a certified bridge welder oversaw the frame build of the 2 foot Z section in back of the cab to make sure it was strong enough to safely handle the powertrain and pass a mandatory state inspection.  Jay chuckled when he mentioned that “There’s over 60 lbs. of mig wire in the frame.”  He found the semi rust free ’46 Ford pickup cab on E-Bay and had it shipped to Twin Mountain from southern LA.  Glenn fabricated the rear bed before he squirted the 2009 VW Jetta red paint.  Rolling stock on this 10,000 lb. hot rod consists of 24.5” tires on polished aluminum rims.  The original air brakes were retained along with the power steering system, gauges and switches.  The interior was stitched by Lenny Quail of Littleton NH.  Twin 5” exhaust pipes dump the spent fumes out back, under the tailgate.  Except for the dual 20 gal. fuel tanks, rear fenders and headlights, this hot rod was mostly built in house by Jay and Glenn.  “The crew of the Mt. Washington Cog Railway helped us out with some machine and fab work on the front suspension parts,” Jay said. 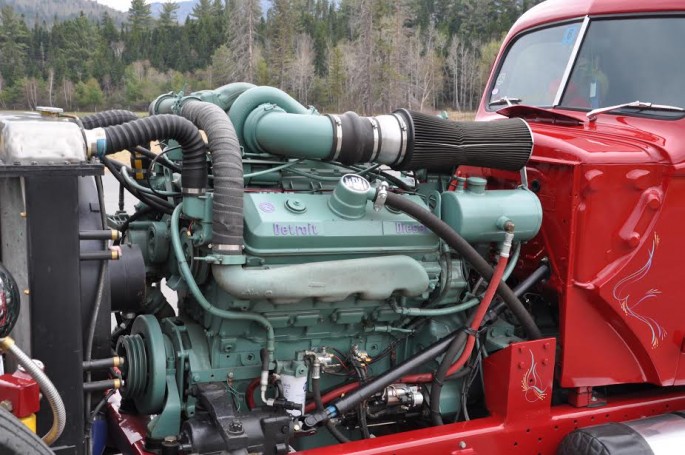 Go big or go home!!!  The 736 cu in Detroit Diesel is rated at 424 hp and weighs over a ton.  It is connected to a 4 speed Allison transmission.

When asked about the most difficult part of the build, Jay quickly said “All of it!  I had a Lull type forklift with a 44’ reach and 25,000 lb. capacity.  Everything is heavy, engine and tranny weighs 4000 lbs. and the rear end is well over a ton. The lift was needed for the countless trial fits necessary on a project this size.”  It took 1100 non union hours of labor in 2.5 years to finish this truck and make no mistake, it’s a driver.  Jay said, “The most rewarding part of this hot rod is taking it for a spin and the reaction we get from the kids, they love it!”  It’s a safe bet that Jay’s unique creation would get a big smile and thumbs up from “Big Daddy Roth” for sure.  Mission accomplished. 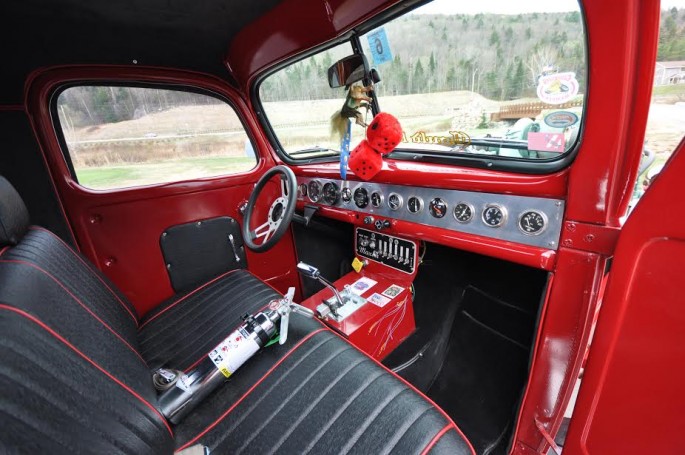 Inside, Jay utilized many of the original gauges and switches from the donor firetruck. 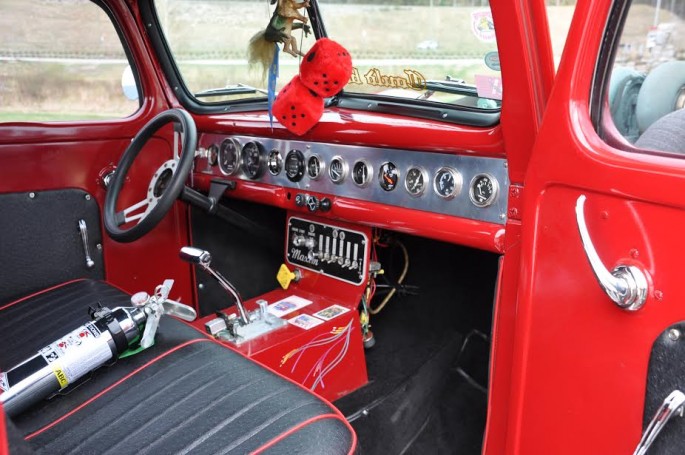 If you like to keep an eye on the engine especially the turbocharger while cruzin’ this is the machine for you. 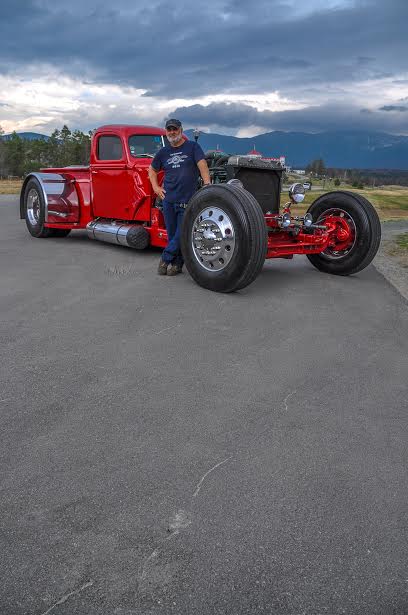 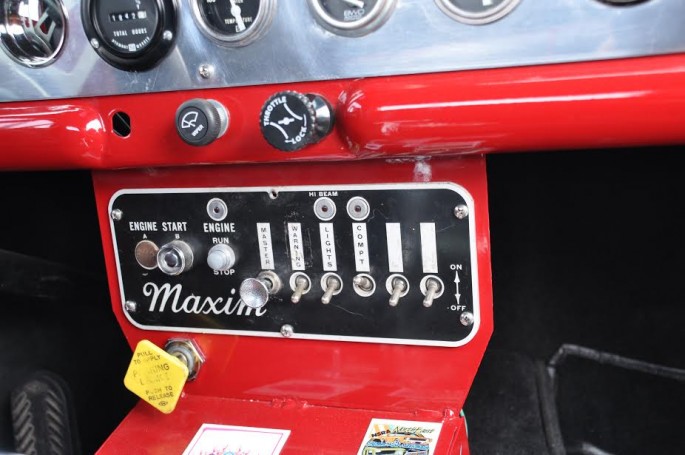 The switch panel was also transplanted, note the yellow diamond valve on the lower left, it activates the air parking brake. 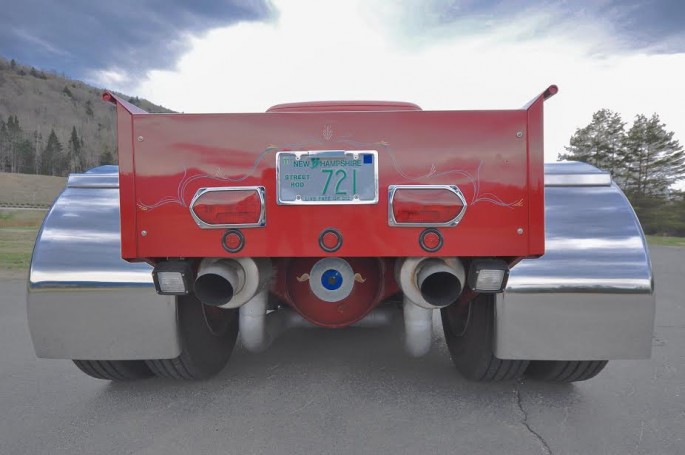 Out back resides a set of dual 5” exhausts and the tail lights recycled from the fire truck.  A big bloodshot eyeball mural on the pumpkin is a tribute to “Von Dutch.”

Racepak Announces Who Made Team Racepak 2017! See If You Made The Cut Right Here! Watch These Miners Put A Massive Dump Truck Back On Its Wheels In Amazingly Gentle Fashion - 100% BS Approved!