Chugga Chugga Tug Of Wars: These Videos Of Steam Tractors Applying Their Grunt Are Awesome 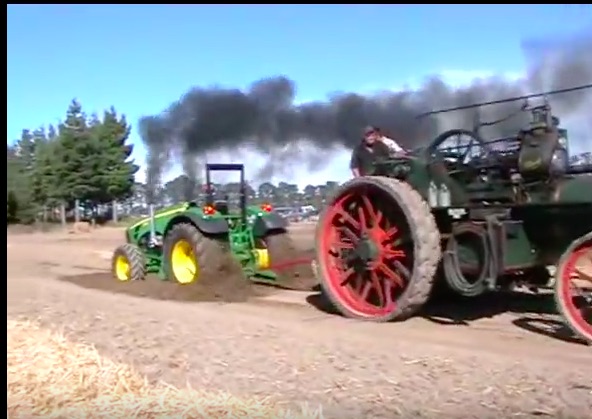 What’s heavy, slow, and makes a chuffing noise when worked hard? No, not me you jerks! I am talking about steam tractors. I went around and assembled a bunch of videos of these machines hooking up to each other or different working machines in feats of raw grunt and strength. Yes, these videos of steam tractors applying their grunt in tug of war contests are awesome. From the hot rodded John Deere in the first one to the pair of iron giants in the last, you get a good appreciation of not only the power these machines had but the sheer size and girth of them as well.

It must have really been something when these lumbering giants started to show up on the giant farms of the midwest  in the late 1800s and early 1900s. Even more amazing is the fact that farmers who had never so much as seen automated equipment could be tossed the keys to what were basically land bore locomotives that came with all the same interest risks of superheated steam, high pressure, and (for the time) complex mechanical systems. Guys went from massive teams of horses to these behemoths and then evolved from there.

The first traction engines were not really designed to pull stuff as much as they were valued for their powerful flywheels that could run threshing equipment and whatever else could be powered with a massive leather belt whirring about. Implements and every larger plows were developed to help speed the work of the farmer.

As with every type of machine, contests were developed to showcase their strength and that’s what we have hear. Old school, straight up tug of war action. Enjoy!

2 thoughts on “Chugga Chugga Tug Of Wars: These Videos Of Steam Tractors Applying Their Grunt Are Awesome”