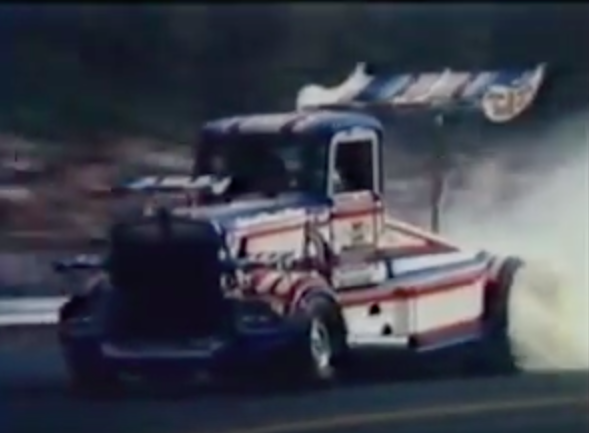 Tyrone Malone was one heck of a self-promoting machine and a guy who made his living in some interesting ways. The former trucker is most famous for his fleet of hot rod big rigs that he ran under the sponsor flag of Bandag, the tire recapping industry leader. The most powerful and cool of his rigs was the Super Boss which was a big Kenworth tractor that had a really wicked up Detroit Diesel under the hood. He appeared at drag strips across the country to do burnouts, spin donuts, and make quarter mile exhibition runs. Prior to those days, he actually had an even weirder way to make a buck. How? With a giant reefer trailer and a dead whale the guy traversed the country charging 50 cents a head to walk through the trailer and see Little Irvy the whale. That act actually lasted into the 1990s!

Anyway, this video is a promotional film for Bandag but rather than just bore you to death about recapped tires, this is a film full of good Superboss footage showing the truck ripping tires and making all kind of good noise along with some footage of the Super Boss going down the track. Many of you probably remember Tyrone Malone and many of you have likely never heard of him. He was an old school promoter/showman that did his best to put on a good show and keep people entertained. This film is 100% proof of that.