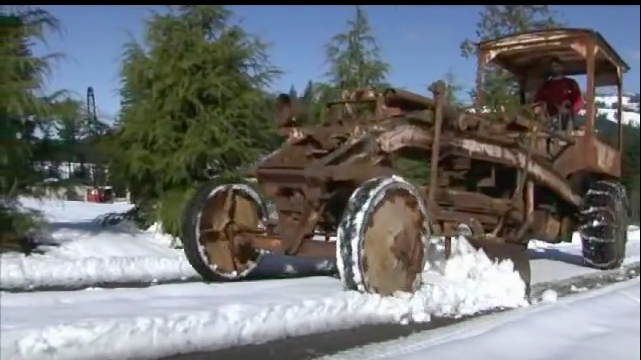 Well here’s the slowest thing that’ll be featured BangShift this week! The video below shows an ancient McCormick-Deering grader that has been restored to working condition by its owner in Oregon. The guy is a heavy equipment operator by trade and he uses this old beastly thing to plow his driveway. The video was made by the Oregon Department of Transportation and for good reason. This was one of the first pieces of equipment that the state owned and used to maintain their roads. Purchased new in 1929, the machine now stands at 86 and if things are still the same as this video, it is dutifully (and slowly) pushing the snow off the owner’s rural looking driveway.

Like all old tractors this thing is a study in mechanical advantage. Gearing is to praise for every function of this machine’s usefulness. From the fact that it can even push anything at all with a low power engine due to the steep mechanical advantage the axle and transmission gears give it, to the ability of the operator to raise and lower his big steel blade by simply spinning a couple of wheels that are attached to shafts that have gears on them, to the steering which is also likely controlled by a worm gear arrangement, it is all mechanical all the time. Today, a machine like this is a technological marvel with advanced hydraulic and guidance to keep its work totally straight, true, and level. Back in 1929 the operator was ecstatic that he had a roof to stand under when the sun was baking or when the rain/snow was falling.

It seems about the only thing that has been replaced on this tractor over the years is the engine. We’re not sure if the engine in it is what it should be or something that the owner made work but it sure sounds period. That hollow kind of exhaust note that comes from little compression and likely a threaded pipe exhaust system is music to our ears.

This is a pretty fun watch and it is always cool to see an ancient old machine like this still grunting away and doing what it was designed to do all these decades later. Will today’s stuff still be serviceable in 90 years? Yeah right.

Classic YouTube: Cannonballs Off A Sunken Dodge, A Freightliner, And A Severely Abused Crown Vic! Watching This Dodge Dakota R/T Drifting Around Rockford Speedway Is Having An Absolute Blast