Maximum VW: The Huge Bug Is A Masterpiece of Metal Working, Creativity, and Fun – 3,500 Custom Parts! 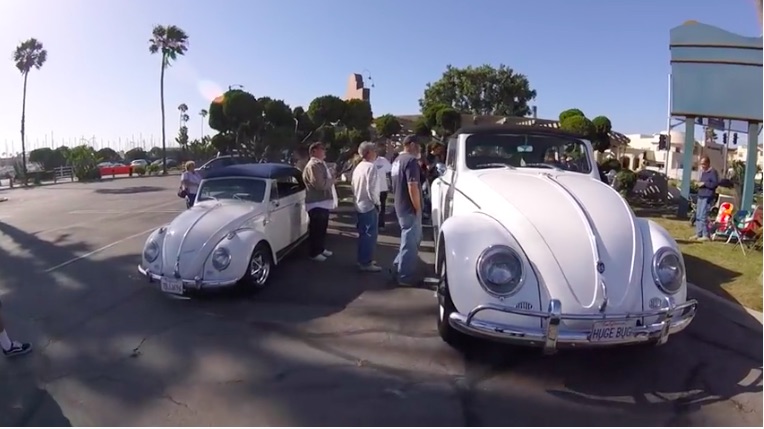 Yes, this is truly a car that lives up to the name! The Huge Bug is something we should have known about forever ago but we didn’t. My pal Alan Reinhart sent along a link of the car at a car show and we went digging around to find out more about the thing. Made by a man named Richard Tupper and his son, this is an incredible replica of a VW Beetle but 40% larger than it originally came from the factory. Tupper and his son are both metal workers and they employed their amazing talents, equipment, and creativity to make this astonishing car…which is actually a truck.

The huge Beetle sits on a narrowed and shortened Dodge truck frame! The power plant and driveline are all Dodge truck. It is the 3,500 parts on top of those things that Tupper and his son, along with other talented craftsmen made. They disassembled a 1959 Beetle and measured everything, digitally scanned it, and reproduced every inch of the car at 40% larger than original. It’s a pretty big fellah and the fun stuff is in the details of how far they took it.

The first video is Jay Leno introducing the car and giving a quick snippet of information. The second video is Richard Tupper’s son talking about the build and the work that went into making the car. The hubcaps are explained in detail and just the process of making those had us about ready to break into a sweat!

We love when creative people with the talent and equipment to turn out something stunning do it, just to see if they can. Well? These guys can. Amazing!

Bug Out 'Stang: This 2009 Ford Mustang Has 11" Of Suspension Travel, And Exocage, and An Evil Demeanor Think We're Kidding: Garrett To Begin Manufacture Of Electric Assist Turbochargers In 2021 (OE User Not Named Yet)