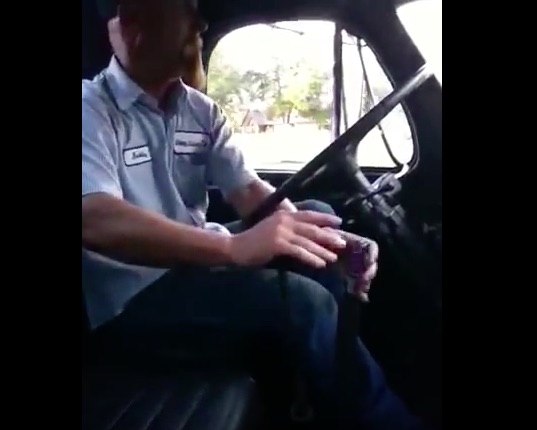 It has been a while since we have features someone getting after it in an old big rig with a multiple stick transmission. In this case the truck is a 1984 Mack B-61 and the driver is Bob. We don’t know Bob but Bob sure as hell knows how to run this gearbox. Man, you think NHRA pro stock drivers are quick on the handle? As this dude works his way through every gear from a standing start, he’s not fooling around! Obviously with an empty truck, he would not have to start off (gear-wise) where he does but it makes for a more entertaining show.

This truck likely has a Thermodyne engine that makes about 200hp and about 600 lb-ft of torque. That’s a pittance as compared to the burly engines in today’s rigs but back then it was enough to keep the Macks competitive with other manufacturers across the country. The transmissions have advanced greatly as well. There’s no such thing as a twin stick truck operated like this from the factory anymore and the range changes that the driver makes are mostly done now with the flick of a little switch on the shift handle. Hell, lots of trucks now have completely automated manual transmissions where the clutch action is handled by a computer as is the shifting. Mack has an M-drive system that they promote that is just that.

I’m still keeping “Own a B-Model Mack” on my list of life goals, right below “drive a B-model Mack”. While would likely be a gear grinding, hand bashing experience, I’d relish every second! Ol’ Bob in this video is a Jedi master to the highest level and the man has some quick hands, that is for sure.

Amazing Historic Drag Video: The Mind-Boggling US Turbine 1 Dragster This 1982 GMC Promotional Film Is All About Small Wreckers - The Truck Is Killer!