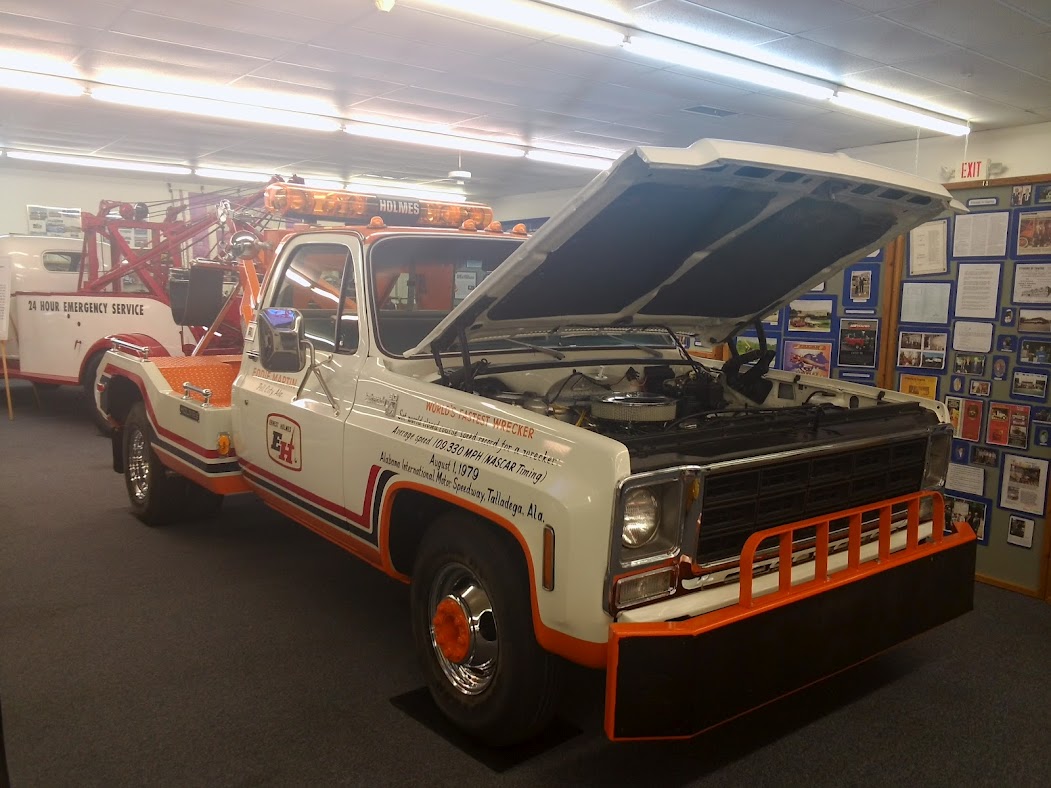 This is the kind of stuff that we love. Like literally love. Who out there knew that in 1979 the Ernest Holmes company decided to set the world’s closed course speed record for a wrecker and they chose to do it with a Chevy truck equipped with a 454 and one of the legendary Holmes 440 wrecker units on the back? We didn’t know anything about it until we were tipped off to the presence of such a record by Sean Mellon. Obviously looking for a way to garner some publicity and make some headlines, someone at the company with enough executive horsepower must have suggest building some sort of “racing” wrecker. One can only imagine the cigarette smoke filled rooms, three beer lunches, and other creative sessions that ended up settling on the idea of building the fastest tow truck that anyone had ever seen before. 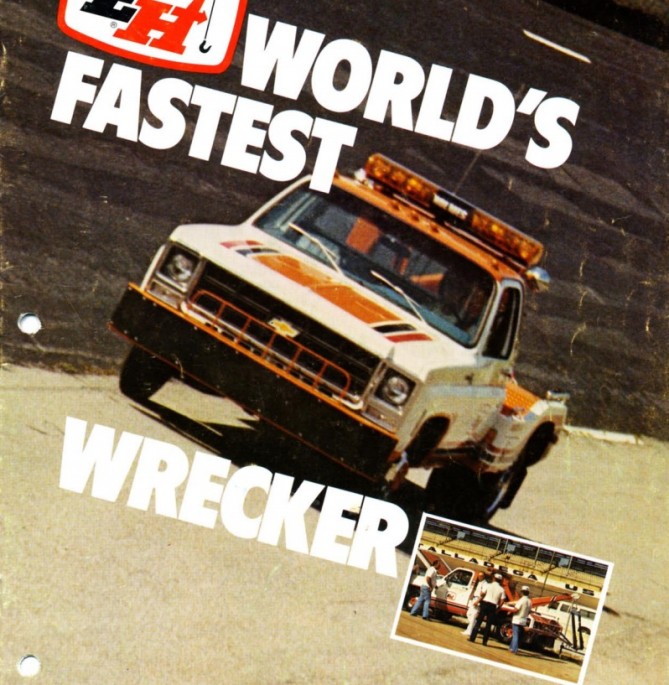 Holmes was not content to just make some radar runs with the thing, they wanted to go big and to do that they rented the Talladega Motor Speedway in Alabama to perform the speed runs. That long speedway was the right place for a company that was involved with stock car racing anyway and while we would have loved for it to be run at Bonneville, there’s a cool element to seeing a wrecker on a super speedway.

Anyway, the meeting notes and company may be lost to history but the specs on the truck are not. Perhaps the coolest part of the whole adventure is the fact that there was ZERO exotica involved. This was a very mildly modified truck. Starting with a 454 powered 1970 C30, the company added a set 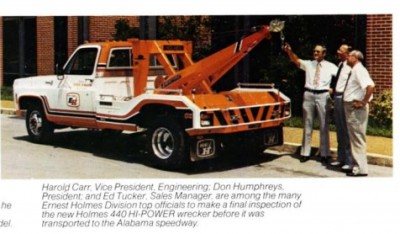 of Hooker headers, an Accel ignition and plug wires, and a Holley intake manifold and that was all they did to the engine.Heck, they even left the stock Q-Jet on it!  The truck was optioned with a 3.21 gear set in the rear end and while there are no interior shots of the truck to indicate whether it was an automatic or a gear jammer, in the end it is all academic because either of those options would have put the high gear ratio at 1:1. There were not overdrives offered in these trucks back then. After making some high speed rips down public roads (with super vision from the Georgia state police) at speeds reported to be 130mph or more, a rear sway bar was added to keep the thing from trying to wreck at speeds which it was never intended to go. There was a light bar and whip antenna on top of the truck to make this a 100% legit effort. No trickery here, this was a truck that could go to work if needed.

The driver of the truck was  a retired stock car driver named Eddie Martin. We’re not sure what qualified him specifically but he got the nod and on 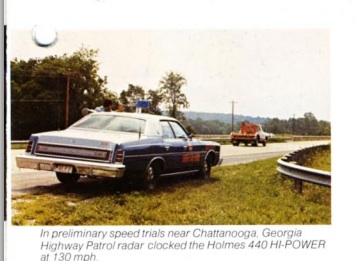 August 1, 1979 the Holmes team, Martin, and the great looking truck took to the course. He made some low speed runs to make sure things were in check and then he let ‘er rip. The good news is that the truck did what they hoped and made an average lap speed of 109mph and some change. According to Holmes this means that he would have been at 130 or better on the straights due to the speed differential on the corners. The bad news was that Martin pulled off the track after one lap due to the tires coming apart. Apparently the stock Michelins being used were not designed for the massive loads the heavy truck was putting on them in the banking. Now this is just me here, but I’d hazarding a guess that there were more than a couple flat footed runs on the truck before they called it quits but it sure sounds better for the PR literature, right?

After its glorious moment in the boiling Alabama sun, the truck was donated to the speedway for display at their International Motorsports Hall of Fame where it lived a comfortable life before being shoved outside to make way for newer exhibitions. After sitting out there for a decade or more, the truck was in rough shape and frankly it looked like its next stop would be the scrapyard but then a lucky break. Holmes was sold to Miller Industries and people from Miller wanted the truck saved and were able to negotiate a deal to get it out of there and into the safety of their hands. 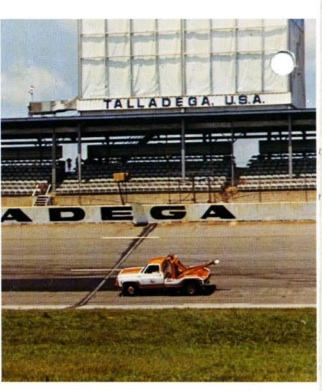 Sales where the restoration took place under the watchful eye and in the skilled hands of Roddy Pellow. Through his hard work, the old girl was set back to the shiny state you see here. It really is a handsome truck and because I am a freak for orange, it suits me just fine. The truck got a new lease on life and made the rounds helping Holmes celebrate their 90th anniversary. After the truck had done its duty on that front it was sent to the International Towing and Recovery museum where it lives happily today.

NOW…I love this truck and I love this history so I have an idea. Being that I’m part owner of a land speed racing organization now it seems only natural that we find a way to break this record. It has to be done in the same fashion, with a legit wrecker that is capable of towing something. 109 is the official number, 130 the unofficial number, so we need to shoot for 140 anyway and we need to do it at the Ohio Mile. Who is in? Think we can get a wrecker company back on board with setting this record? I know people….hmmmm. 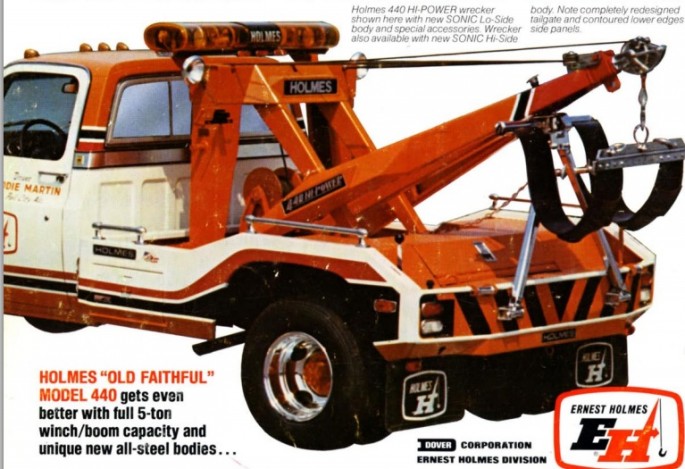 Rough Start: Why Not C4 Yourself? A Budget 1986 Corvette Track Car Is What You Need! Holley EFI Outlaw Street Car Reunion VI: When Qualifying Beats Eliminations - Our Last Gallery!