Sep 25, 2020Brian LohnesBangShift XL, XL VideosComments Off on This 1940 Ford Truck Promotional Film Features About Every Cool Model The Company Made At The Time 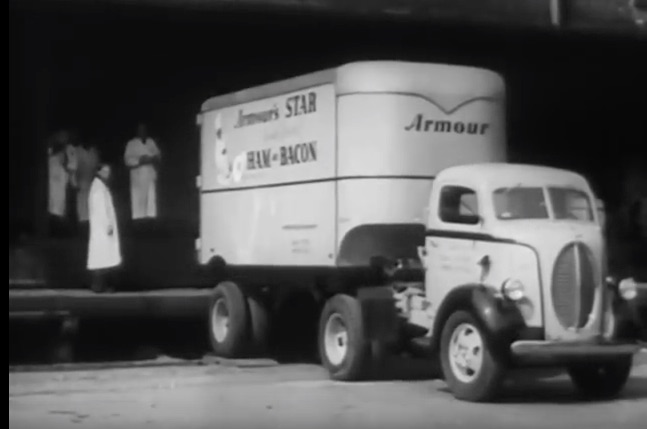 The world has moved on the backs of trucks for many decades now but it was a different story in 1940. It is not as if there were still lots of horse drawn carts moving stuff from place to place but the idea of “trucking” was only about 20 years old when this film was made. Sold in the title as a film about what happens at night when the city sleeps, it is actually a really cool promotional film for heavy duty Ford trucks. From over the road “big rig” style machines to smaller one ton and larger flatbeds, this covers the whole line and it does so in the “infotainment” vein. There’s no deep technical information shared here but there are resources to the Ford V8 and other parts and pieces.

The cab over heavy duty trucks of this time period are beautiful. There’s not other way to really say it. From the bacon truck featured in the lead image above to the car haulers and freight movers that you will see in the film we think that these trucks are just beyond compare.

Yes, we know. These guys were getting pounded by virtually non-existent suspension, the days were long and the work was unforgiving but as the video salutes the drivers we cannot help but to wish we could swap spots for just a day. For the record I was a delivery driver making 80-90 stops a day long before BangShift so I can speak from personal experience the daily “excitement” that the job brings and I did it in a modern truck.

We think you will dig this video because it is interesting and the trucks…ohhh the trucks!

Watch Smokey Yunick Make A Side Splitting Speech From His Induction Into the Daytona Stock Car Racing Hall of Fame Unhinged: Going Nighty-Night On Purpose For G-LOC Training