The Dancing Farmers: Dancing JCB Tractors On Display In Wales 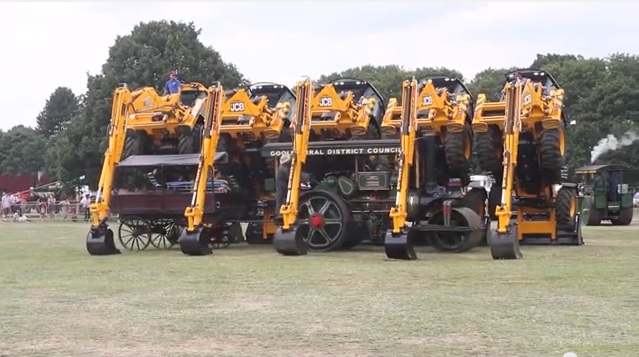 As busy of a man that Brian Lohnes usually is, I have to wonder what he’s going through during this whole shutdown deal. He’s working, of course…besides here, he’s been ramping up his Dork-o-Motive podcast deal and he’s got plenty of other things to contend with, but surely he’s got some down time to get things done. I’m sure his “honey-do” list is a mile long, if mine was any indication, and if he’s bored at all, then he might be going a touch delusional. But then, what would a delusional Brian Lohnes dream about?

Just when I think I’ve seen it all, the Internet is kind enough to bring to me a clip from 2011 that shows a team of JCB drivers putting on a demonstration for a crowd at the Elvaston Castle Steam Rally in Wales, which is a celebration of steam-powered everything. This isn’t just a simple parade lap…this is a precision operation, with five late-model tractors and one classic tractor that are operated by J.C. Balls & Sons, a Midlands-based earth moving and excavation company. The show, choreographed to music and carefully timed, is meant to show not only the capability of the machines, but the skill and abilities of the operators. All we know is, we wouldn’t want to be the guy on the steamroller driving underneath!

It’s like watching the Fantasia hippos dancing…graceful, skillful, and somehow defying the laws of physics.

(Thanks to Cris McHugh for the tip!)

Did Craig Breedlove Get Ripped Off By Carroll Shelby? This Video Tells The Fascinating Tale Of How It Happened! Looks Like Garbage, Runs Like Stink: This Little Aussie Mazda 323 Station Wagon Is Basic And Runs 8.50s!

2 thoughts on “The Dancing Farmers: Dancing JCB Tractors On Display In Wales”