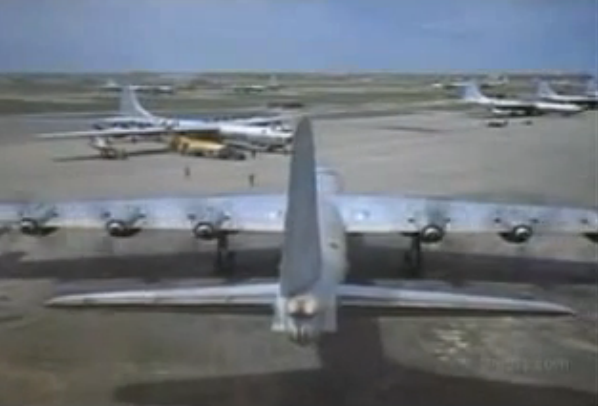 The Convair B-36 Peacemaker still stands as one of the most giant planes ever built. It still IS the largest piston driven airplane ever built as well as the largest combat aircraft ever. Packing six 3,800hp radial engines and four J-47 turbines, this 411,000lb monster could fly at over 420mph and had a range of some 10,000 miles. The wings were 7.5-feet thick at the end where they attached to the fuselage of the plane. The mighty radial engines spun props that were 19ft in diameter and the initial landing gear had single tires that stood 9-feet tall. The plane was updated and revised several times throughout its life with changes like guns being stripped off for weight and speed concerns. The B-36 used a crew of 15 men to operate it in flight and in this video you’ll get a glimpse of what that was like on take off. Wait until you see the flight engineer’s gauge panel!

What was the point of this thing? The B-36 was essentially the biggest potential death dealer in the world. Before countries had the technology to lob missiles at one another from afar, they needed another way to get the nukes to their “final destination”. In the late 1940s and into the 1950s this meant that planes would have to haul the payload. The B-36 could carry any of America’s nuclear weapons of the day from “normal” nukes to stuff like giant hydrogen bombs. It had a payload capacity of 86,000lbs.

It was not without its problems though. Engine fires were common, electrical issues plagued the machines, and through its operational life, there were two instances of nuclear weapons being “lost” on B-36 missions. One was actually dropped in New Mexico but did not explode as the bomb had been disarmed prior to the flight. The other was dropped over the ocean when a crew was getting ready to bail out of a failing plane. That bomb did not have plutonium in it, apparently. Whoopsie doodle!

In the video below, which is a scene from the 1955 movie Strategic Air Command starring Jimmy Stewart as a baseball star that served in the SAC. The B-36 was shown all through this movie. While this is a “Hollywood” scene, there is lots of actual flight footage used, it appears a real cockpit is used here, and the takeoff sequence is really, really awesome. Watching this massive machine heavy itself skyward is really something else.

By 1961, these planes were out of service, having been rendered largely obsolete. Technology marches on but the sheer size, scope, and raw power that the B-36 had will probably never be matched again in a combat aircraft.