This Video Of A Brake Rotor Exploding Is Awesome To Watch – Heat Is A Killer!

Nov 27, 2020Brian LohnesBangShift XL, XL VideosComments Off on This Video Of A Brake Rotor Exploding Is Awesome To Watch – Heat Is A Killer! 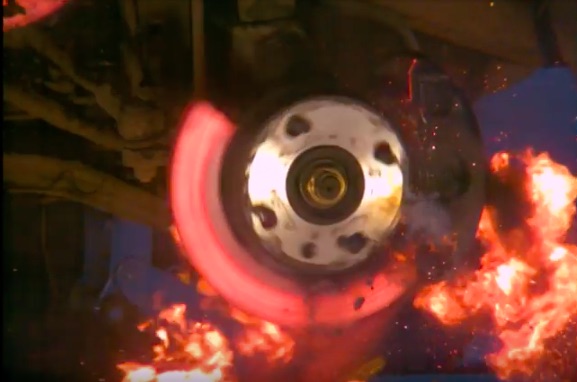 We have showed you a ton of videos from the Hydraulic Press Channel on YouTube. The neat thing is that the same people that have that channel have another one called “Beyond the Press” and on that channel they do all kinds of cool stuff. In this video we see the crazy Fins working on their brake rotor exploding skills with a tires and spray bombed 1.6L Ford Fiesta car.

With the car on a jack, the left front tire locked into the ground and the right front stripped of its wheel/tire combo is naked to the world. We decided to skip ahead and start the video where the action beings to happen. It is pretty amazing to see the evolution of this failure. From the heat in the pad/caliper building up to watching the rotor come to pieces in super slow motion.

This is a neat video and not just for the destruction aspect. When used as a teaching tool it could really help some drivers on there usage of the “pedal on the left”.

This Promotional Film Touting The New 1974 Opels Is Pretty Awesome And Hilarious Classic YouTube: This VW Golf Gives A 350Z And A Porsche A Great Lesson In Humility!