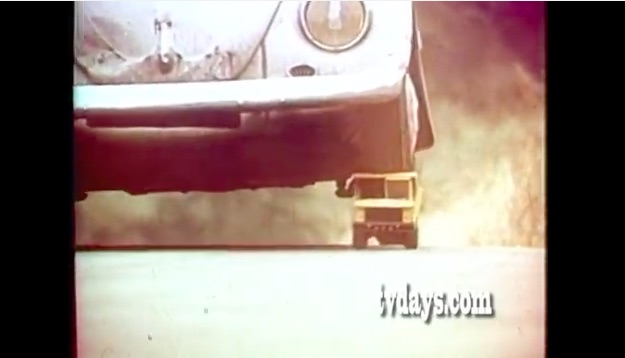 If there’s one complaint that we have about kids toys in the modern age is that they are not all that well made on the whole and on top of that they don’t really inspire a lot of imaginative thought. We’ve got given our guys a ton of automated stuff and blocks, Hot Wheels cars, die-cast cars, along with stuff like their go karts occupy much of their time. My wife keeps a tight leash on the amount of time they can be playing video games and stuff which we think is important because again, it is not really inspiring a whole lot of thought. Amazingly, these were the same concerns and sentiments that people were expressing 45 years ago in 1972. How do we know? Tonka Toys built an entire ad campaign around them. No kidding.

The ads below represent some or all of the Tonka 1972 mix of television advertising and they directly address topics like toys that break almost the moment they are out of the box, toys not really designed to be played with, toys that don’t get your kids actually thinking and playing, and toys that are generally crap.

The scenes of the VW driving along with a Tonka truck under the front wheel and then the elephant standing on the dump truck are amazing but they are all topped by the elephant “outtake” commercial they made to prove their detractors wrong. Advertising at is finest!

Tonka Trucks are certainly part of the fabric of the country or have been for generations of gearheads and kids. The company got swept up in the consolidation in the toy industry during the late 1980s and bought Kenner Parker. That deal did not go as well as they had hoped and without any big hit toys over the course of a few years, they were bought by Rhode Island’s Hasbro toys. The Tonka brand is still on the shelf today but we’d bet that many of the people who were working there in 1972 would not exactly be doing backflips when they saw the relatively light duty plastic toys that are the brand’s calling card now. Don’t get us wrong, they are still good and still inspire the imaginations of millions of kids, but they don’t squeak, clank, or feel like the old ones.