Too Fat To Fly: These Massive Dakar Trucks Defy Physics and Punish The Earth

Jan 15, 2016Brian LohnesBangShift XL, XL VideosComments Off on Too Fat To Fly: These Massive Dakar Trucks Defy Physics and Punish The Earth 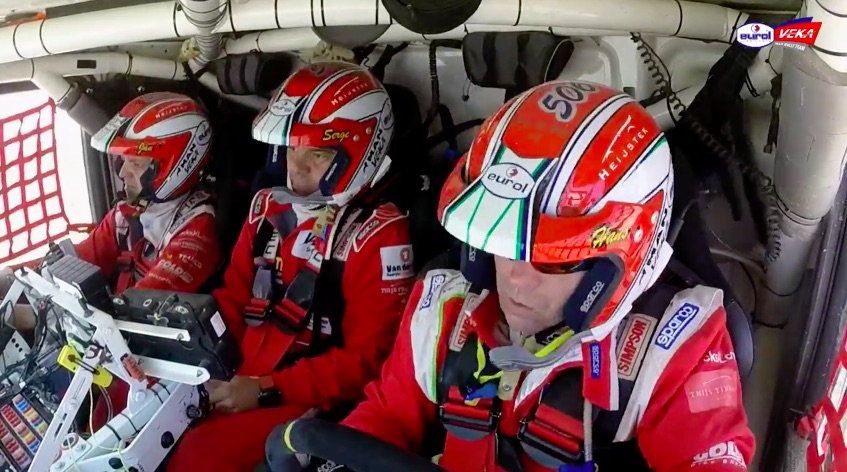 (By Eric Rood) – By now, you’ve probably seen the video of the Red Bull Kamaz truck absolutely launching over a jump during the 2014 Dakar Rally. If you haven’t, though, here it is:

Ever wonder that looks like from inside one of these behemoths? Netherlands’ EVM Rally Team has strung together daily recaps of their MAN TGS 18.480 4×4 trucks at the 2016 Dakar Rally that give you a pretty good picture. Sure, it’s all narrated in Dutch, but you don’t have to speak the language to understand how crazy it is to fling an 11-ton truck with a souped-up 12.4-liter diesel six across thousands of desert miles.

This video from Tuesday’s Stage 8 (the same where Sebastien Loeb crashed from the rally’s overall lead) captures the experience pretty well: a couple of massive jumps that send the three-man crew into fits of nervous laughter, hanging dust clouds, a mechanical breakdown, overtaking another truck in the thick dust, a desolate high-altitude road arched by low-hanging branches that surely bang the MAN’s roof, and navigating terrain where no road is particularly evident and the topography tosses the crew against their harnesses.

And that’s just on one of the shorter stages. It’s not hard to imagine how two weeks of this racing at a frenetic pace wears out man and machine so thoroughly.

Jegs Sportsnationals 2016 Is On May 27-29 at Beech Bend Raceway Park In Bowling Green Quick Blast: A Collection Of The Stranger Funny Cars Of The Seventies!