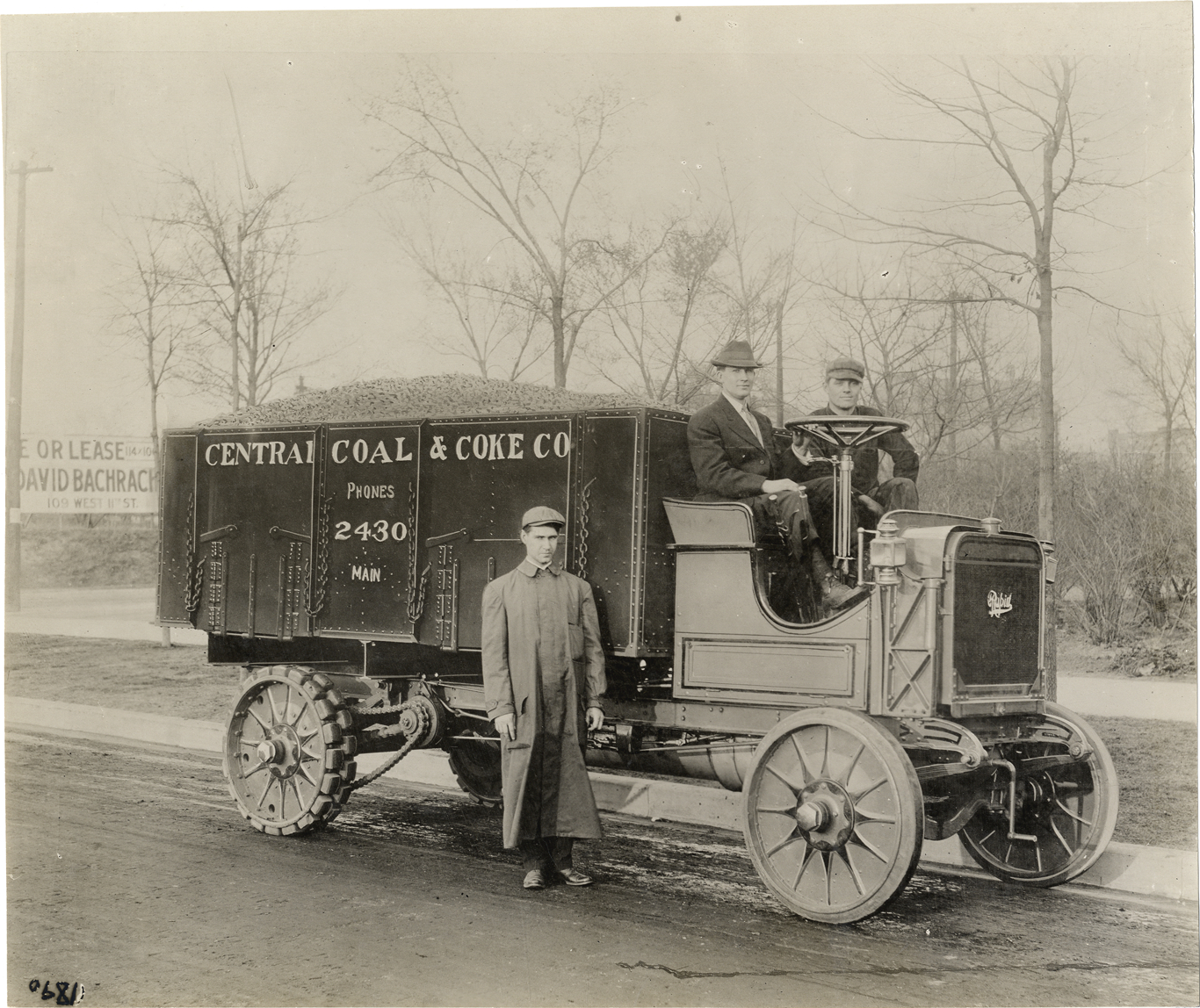 (Photos: Detroit Public Library Digital Collection) – It has been a little while since we had an installment of “truckology” around here and frankly I was missing it. Digging up these old photos and putting some context to them is pretty fun. We’re going to continue on with more images today. Some brands we have not seen before, some applications we have not seen before, and there are at least one or two Easter eggs hiding out in the photo stack so keep your eyes open!

Let’s pick it up where we left off, shall we? 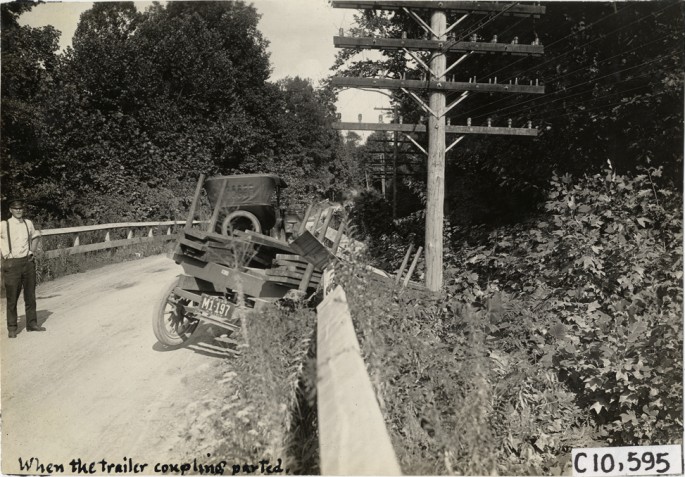 The hand written caption on the photo says, “when the trailer coupling parted”. It is weird how many people have trailers fall off in 2015 so we can only imagine how bad it was 100 years ago! We cannot tell if the truck pulling the trailer ended up in the bush or if the trailer different the brunt of the damage. Someone did not get their boards that day. 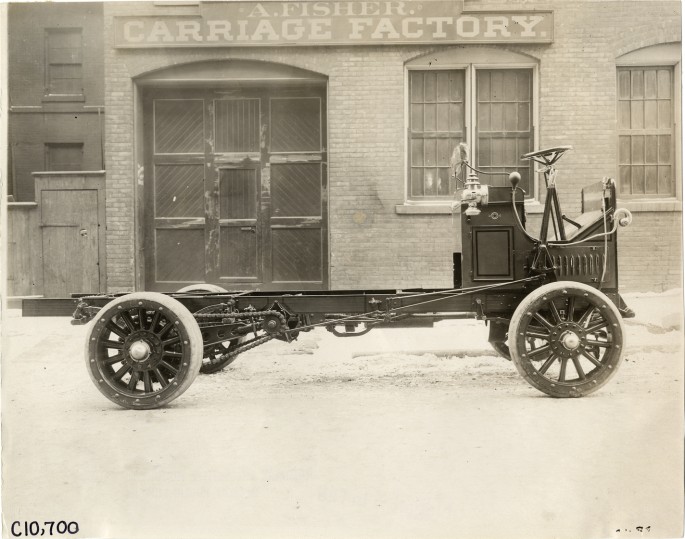 This is a 1910 Universal truck which is cool but note the building that it is sitting on front of. Is this one of the entities that became “Fisher Body” that produced millions and millions of bodies over its life? 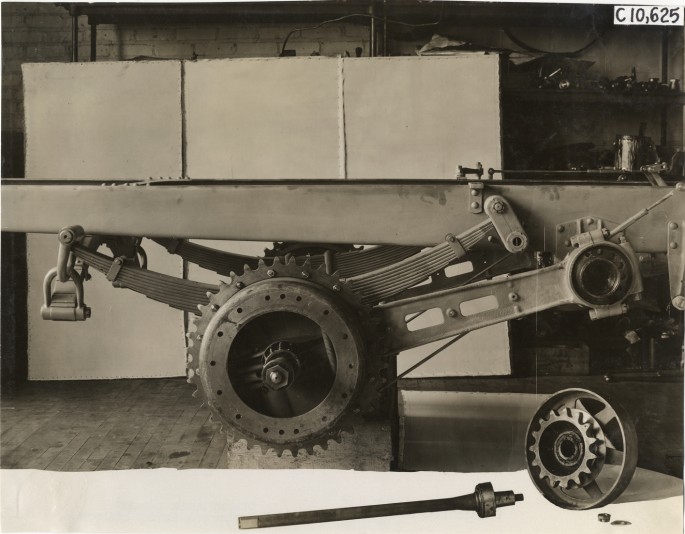 This is a pretty cool shot of the rear suspension used on a 1912 Lozier truck. Note the crazy leaf springs parallel to the frame and the single “suicide” style leaf spanning across the rear frame rails. This just looks noisy, right? 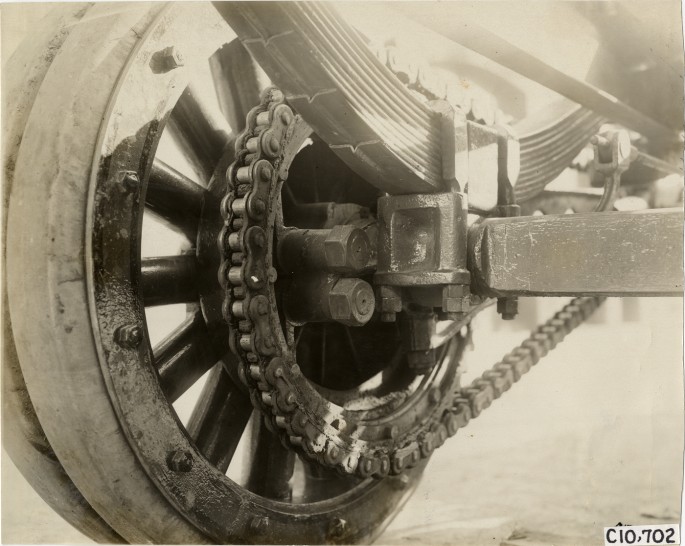 Chain drive systems are fascinating and slightly down the page here you’ll see a photo that’ll blow your mind because it did the same to us. Here we can see the chain and sprocket as well as the leaf springs on the back of a 1910 Universal like the truck above. 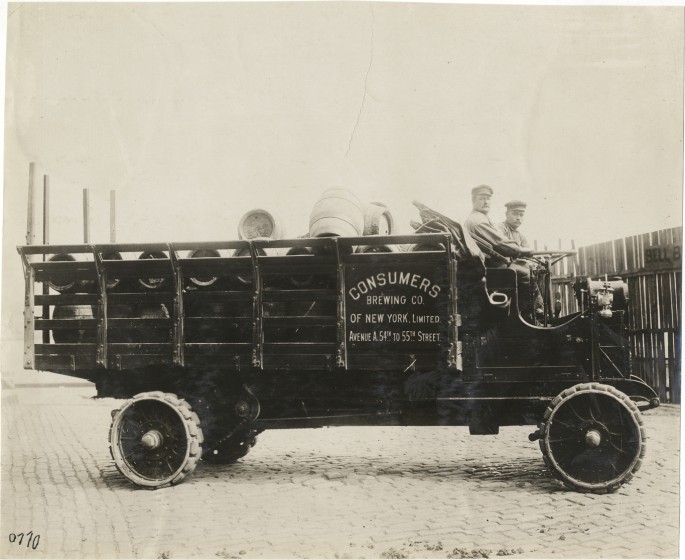 The Consumers Brewing Company. We like that name because we’re consumers of whatever people are brewing. The truck is a 1910 Rapid and the guys in the cab look to be antsy to start their workday rather than pose for pictures. Was a route driver for a few years, a managed guys who were route drivers, and I know that face. 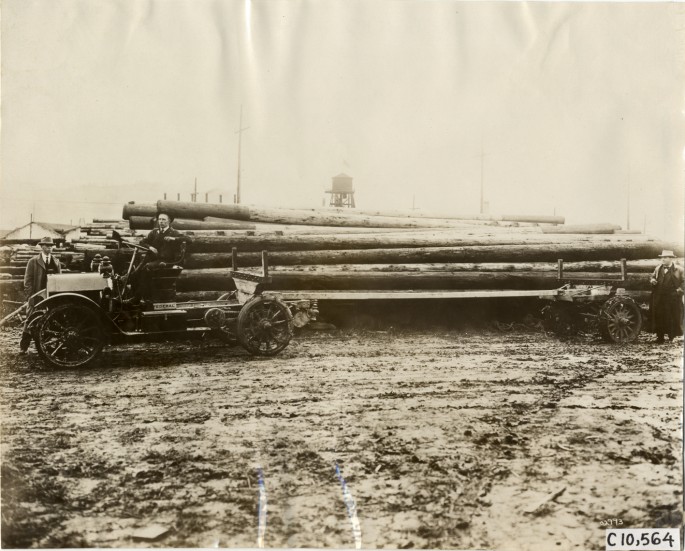 This 1912 Federal is about to be loaded with logs. That had to have been a terrifying experience. The heavy load of even just a few logs versus the horrible mechanical brakes that these trucks had made the drivers some of the most brave people on the face of the Earth. Hills, even gentle ones could kill you. 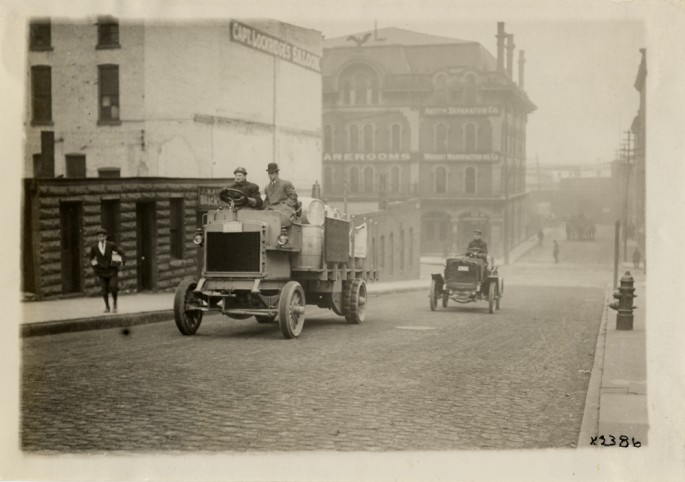 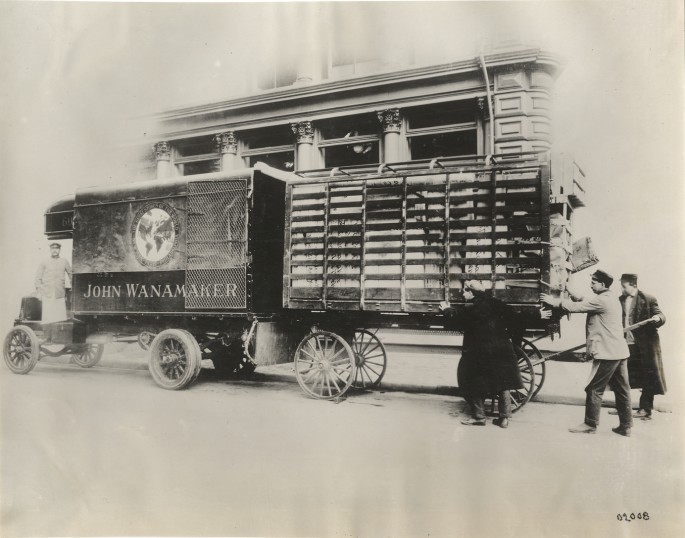 This 1911 Grabowsky is loaded and is pulling a trailer. We hope that this guy got hazard pay because essentially doubling the weight of the truck seems like it wouldn’t be the best of ideas in the mechanical sense but hey, the guys in the warehouse weren’t driving and the stuff needed to get where it was going. Drive safe! 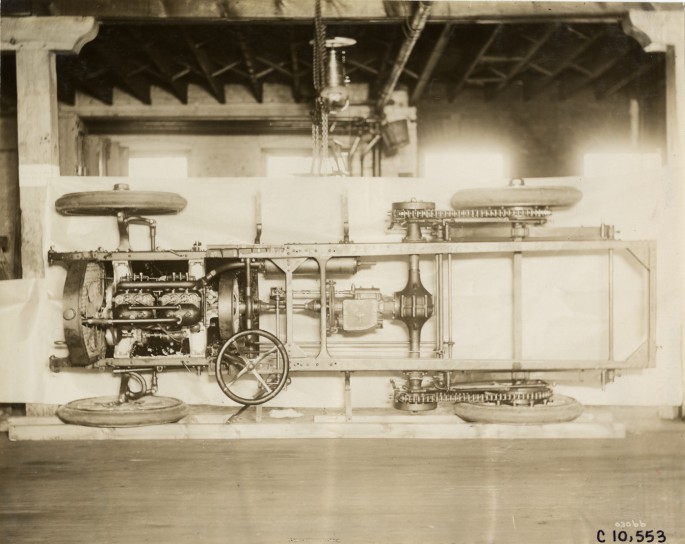 This revealing shot of a 1912 Federal truck chassis is amazing! look at what’s directly behind the transmission. Yes, that is  freaking differential! We had no idea that the chain drive system was actually fed off of a diff that was mounted ahead of the axle and it immediately made us wonder why they did not push the diff back and bolt the tires to the ends?! 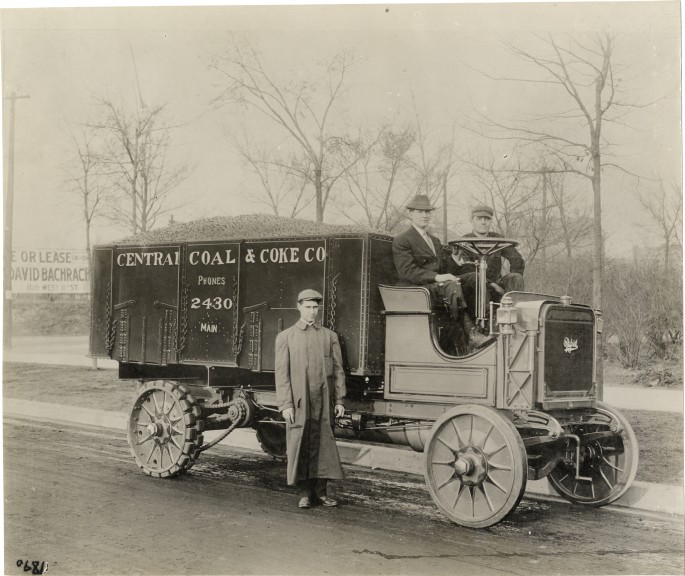 This Rapid dump truck is sweet and it has a full load of coal to be delivered to homes and businesses to keep them warm. Note the side doors that can be opened to bleed the load out. We don’t see any chutes but the customer may have had to provide those. Neat trucks. 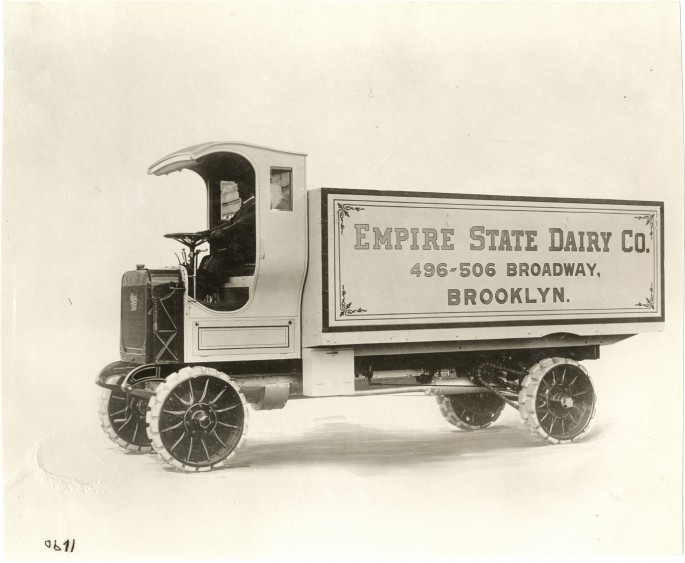 The milk truck was a staple of American life for a few decades and this is likely one of the earlier versions of that icon. The Empire State Dairy Compay employed Rapid trucks to make are its stuff got to market without spoilage. We’re guessing that the body sides fold out on this one. 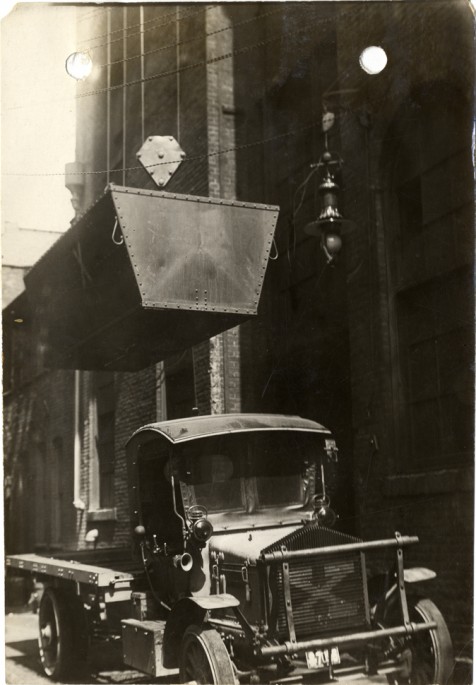 Here’s the bed being lowered down onto a coal truck. It looks like it was removed and dumped and the truck will go back and fill up again before making another delivery. Big plants and factories had rigs like this to take big deliveries in one shot. Pretty neat. 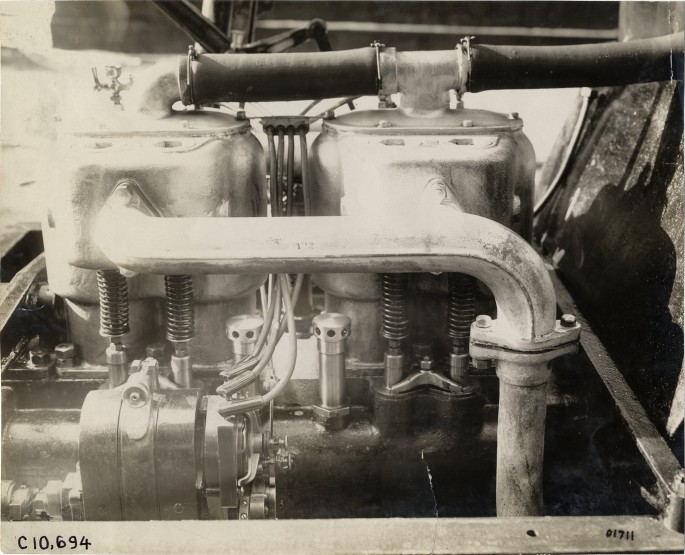 Here’s the T-head engine you would have found in a 1910 Universal truck. 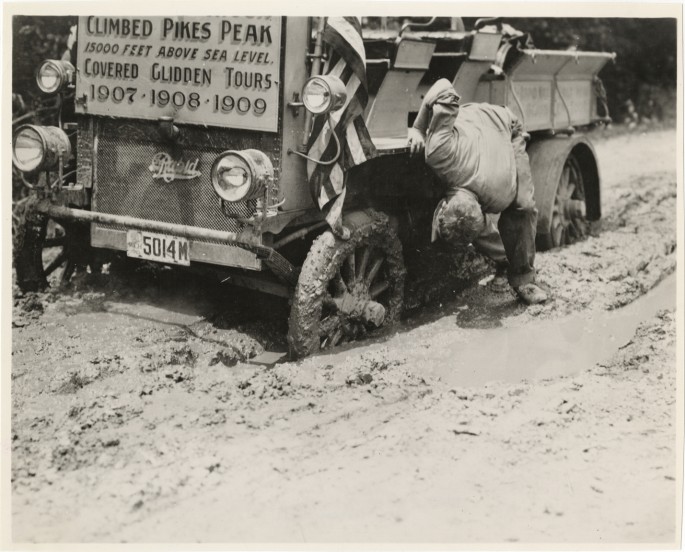 The mortal enemy of anyone traveling around this country at the turn of the century was mud. The roads were horrible in America and the main reason was lack of maintenance and a lack of pavement any distance outside of a metro area. Horses likely dragged this thing out. 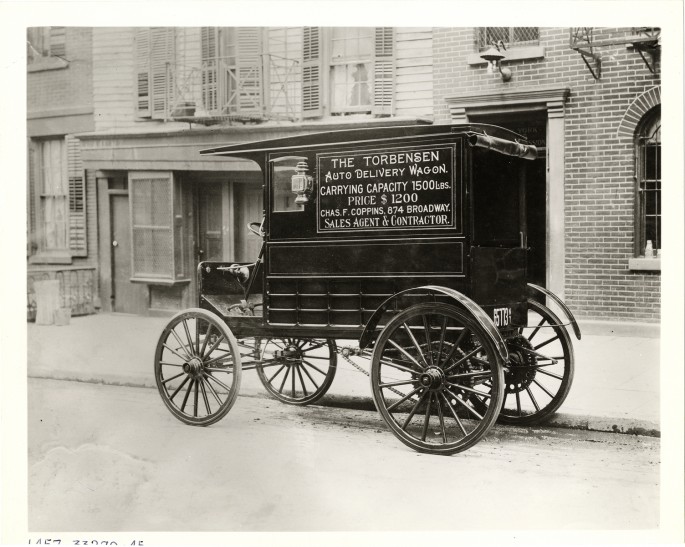 The Torbenson truck was very inexpensive but you can see why. It looks like it, had limited carrying capacity, and would you trucks something so narrow with such a tall center of gravity and those spindly wheels? Torbenson did not stay in the truck making business for that long but they did stay in the component manufacturing and engineering end of things for a long time with axles and other products. 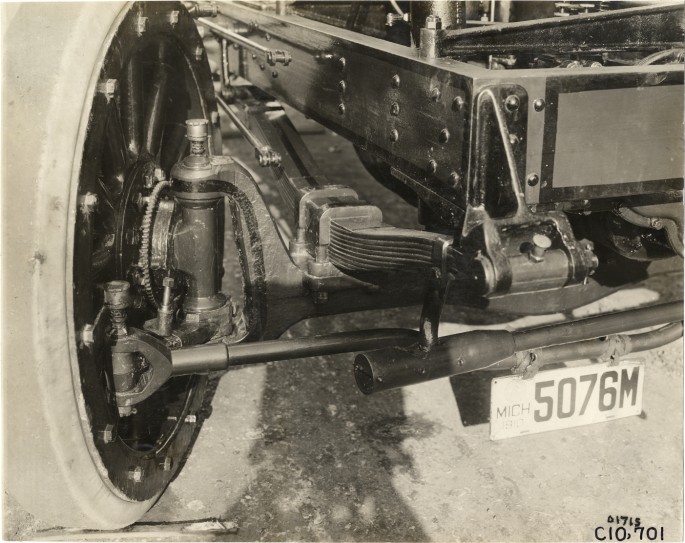 Hey, if you look quick it is just like a F1 car, right? Built like, and riding like anvils, these trucks were constructed in the era where over engineering was actually smiled upon. 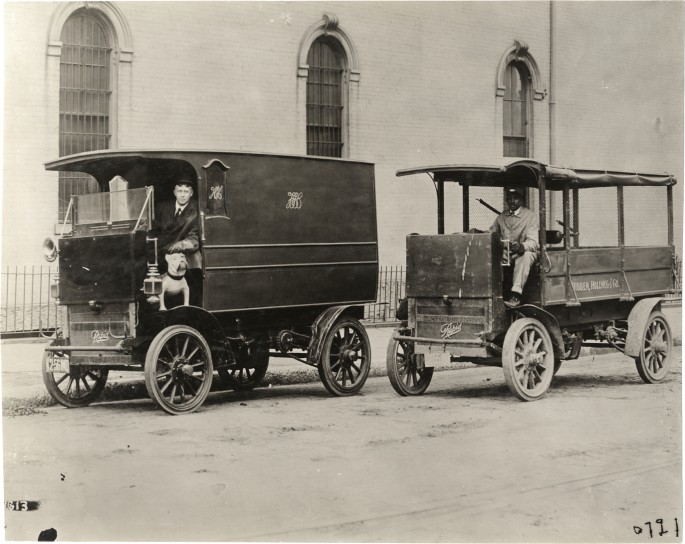 Here’s a pair of Rapids. Remember, Rapid went on to become GMC a little later in life which is really cool to think about. The best part of this photo? Check out the bulldog in the truck! Thins proof that truck drivers have had dogs riding shotgun literally since there were trucks! 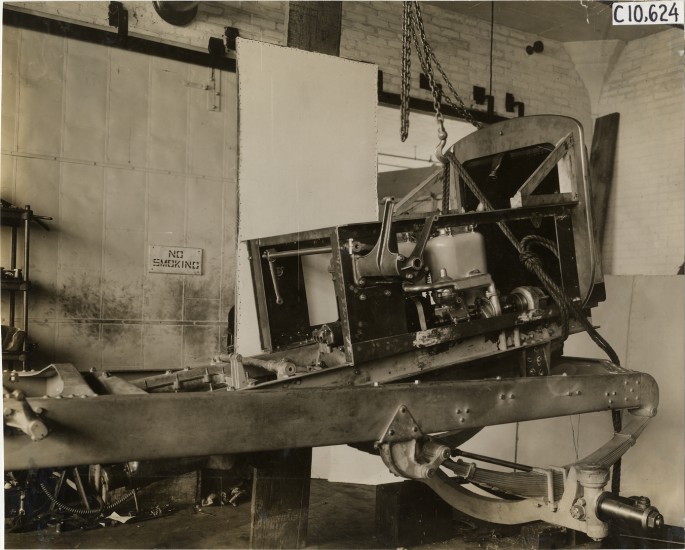 Note how the whole engine and cooing system is heading into this truck. The installation was no doubt made easier by the fact that it all sits on its own subframe. Coo photo and dig both the “No Smoking” sign and the greasy area on the wall. Wonder why that spot was so dirty? 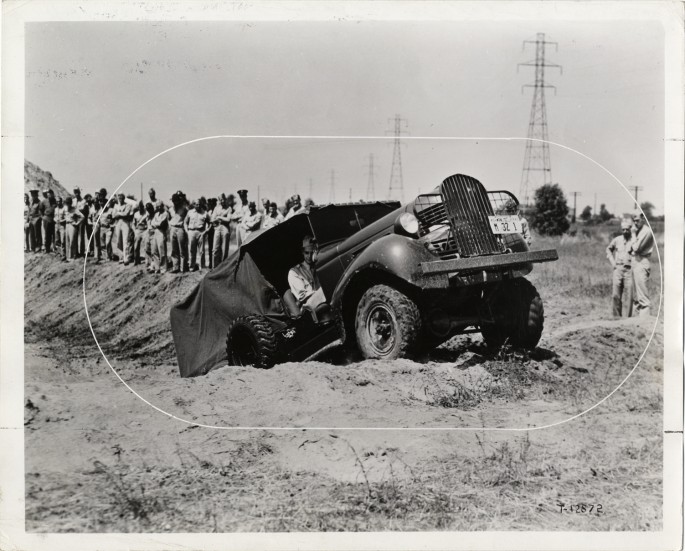 Here’s one of those Easter eggs we were telling you about. This is a 1940s Dodge that was being pitched to the military. You can see it being put through its paces with a large group of military guys looking on. We’re guessing that the contract was either small of non-existent because this design of Dodge is completely unfamiliar to us. 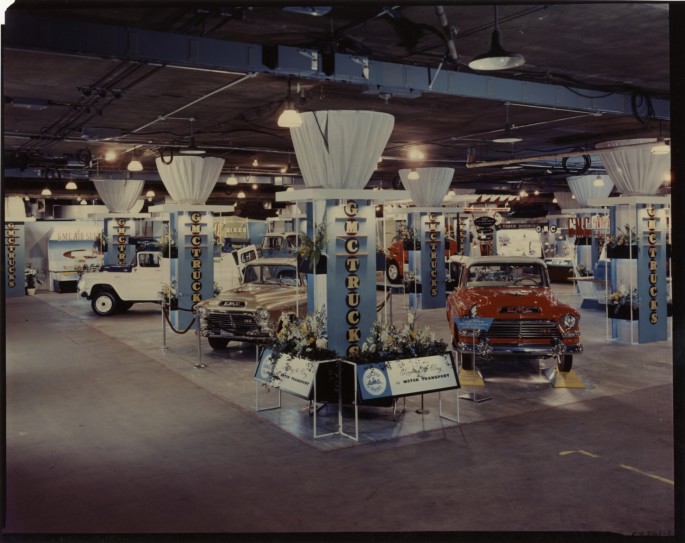 Here’s the 1958 GMC lineup in living color! The two pickups are beautiful but if you look close at the Carryall on the left side of the frame and the way it is sitting, we’re willing to bet the farm that the truck has NAPCO four wheel drive under it.

There’s more where this came from…see you next time!