Video: Running Over Your Own Front Axle Is Never A Good Scenario No Matter The Motorsport

Sep 20, 2019Brian LohnesBangShift XL, XL VideosComments Off on Video: Running Over Your Own Front Axle Is Never A Good Scenario No Matter The Motorsport 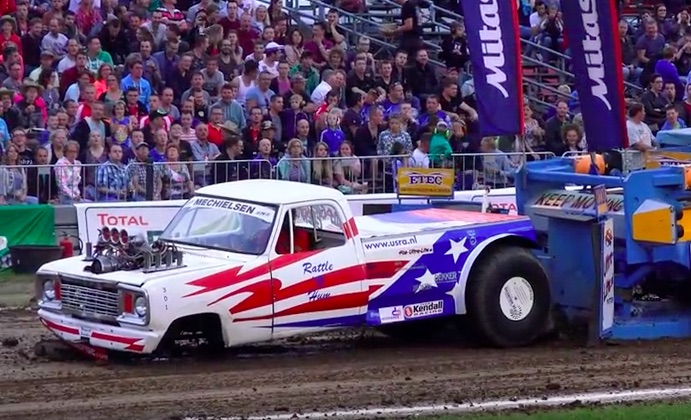 It is virtually impossible to make blanket statements about racing and have them be applicable across the board but this video does prove that there are some truths that we can hold to be self evident. Running over your own front axle is bad no matter what type of event you are competing in. Bad for the drags, bad for stock cars, and bad for pulling trucks as this one demonstrates. This is one violent ride and the video below plays it for us in real time and then in slow motion. The amount of height that the rear of the truck gets is insanity.

The truck gets off the starting line and is starting to get some momentum behind it. The engine does not sound all that happy but when the revs come up, the engine seems to clean up and the nose rises. Things appear to be going OK and then instantly the throttle is chopped off and the nose of the truck smashes into the ground hard enough that it breaks the axle on both ends, the front wheels fold up, and the nose digs in. We have no idea what it sounds like when your from axle passes violently under your truck but this one sure did!

When the big rear tires hit the axle, the back of the truck shoots a few feet into the air and that’s actually where the driver got lucky. The truck did not turn over and while the nose skidded along the ground it did not dig in too badly. This was one hell of a ride and we’re glad it was not worse in the end!

Press play below to see this pulling truck drive over its own front axle – Whoops!

Tibu-Gone: Watch These Guys Blow Up A Hyundai In Spectacular Fashion With Nitrous and The Rev Limiter BangShift Question Of The Day: If You're Stuck Owning One, What Noise Would You Want Your Electric Vehicle To Play?