Watch An Idiot Try To Extricate Himself And His Jeep From A Frozen Pond….In Someone’s Yard 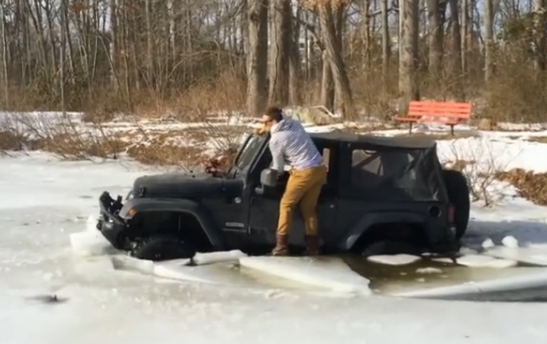 The underlying message to take away from this video is that it was a miracle no one was killed in making it. The star of the show is a guy who drove a Jeep Wrangler out onto a frozen pond with no idea (a) how thick the ice was and (b) how deep the pond was. When the Jeep went through just off shore it was shallow enough that the truck could still be driven in the water without having the intake suck a mouthful of the pond into the engine and wreck the thing completely. It only gets worse from there.

With the truck through the ice we see the driver who looks like he just fell out of an issue of Hipster Monthly start to pull cable from a newly (as claimed in the video) installed winch. I thought this was kind of curious at first and my suspicion was right because the guy tries to pull the Jeep across the pond THROUGH THE ICE. He obviously thought that his truck was a Russian ice breaking truck and that the little winch on the front had enough strength to pull a Jeep THROUGH ice. Spoiler alert: It doesn’t. Standing on the side of the truck in what we’d refer to as the kill zone in the event of a winch cable snap, this kid holds the button down until he destroys the new winch without having moved the truck an inch.

He then goes into a rev-limiter testing span of a couple minutes in forward and reverse before bouncing the thing up back onto dry land. This is when the true magic of the video is exposed. THERE IS A FRIGGIN’ HOUSE IN THE BACKGROUND. Someone could have walked over, gotten the Lexus/Mercedes/BMW SUV our of the driveway and given the Jeep a gentle tug, ending the whole business in about five minutes. The one thing we can agree on with the guy in the video is when the caption pops on screen stating that the dude has no business owning a Jeep. He’s right…he doesn’t.

12 thoughts on “Watch An Idiot Try To Extricate Himself And His Jeep From A Frozen Pond….In Someone’s Yard”