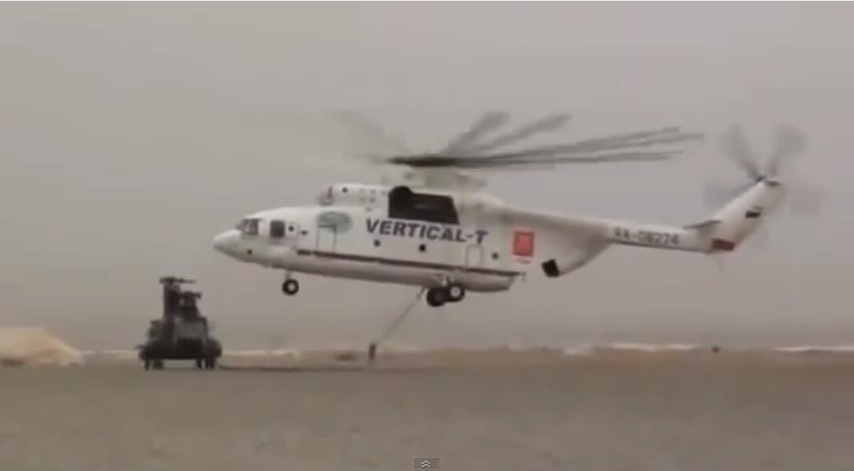 The Boeing CH-47 Chinook series of helicopters are big. The newest variant, the -47F, packs engines with 4,868 shaft horsepower and can cruise at 175mph with nine and a half tons of cargo aboard. Chinooks are used the world over for everything from rescue missions to ferry services for oil platforms, and they have been doing the job since 1962. It’s a beast of a helicopter.

Unless you have one of these big sonovabitches hovering next to it. That giant thing is the Mil Mi-26, and it’s currently the end-all be-all in the helicopter world, period. This thing has the numbers that embarrass even the well-known Skycrane helicopter: It holds the FAI record for weight loading at 62 tons. So when a MH-47E from the U.S. Army’s 160th SOAR group needed a lift in Afghanistan in 2002, the military leased a Mi-26 from a civilian group that had been working construction and firefighting jobs in Tajikistan and had the big aircraft haul the stricken Chinook first to Kabul, then Bagram Air Base so that it could be shipped back to Fort Campbell for repairs. The Chinook was estimated to weigh in at 26,000 lbs. during this sling-load.

Classic YouTube: The NASCAR UPS Truck - Brembo Doesn't Make Brakes Big Enough! Anything Can Be A Racecar If You're Brave Enough, Like This Chrysler Crossfire!