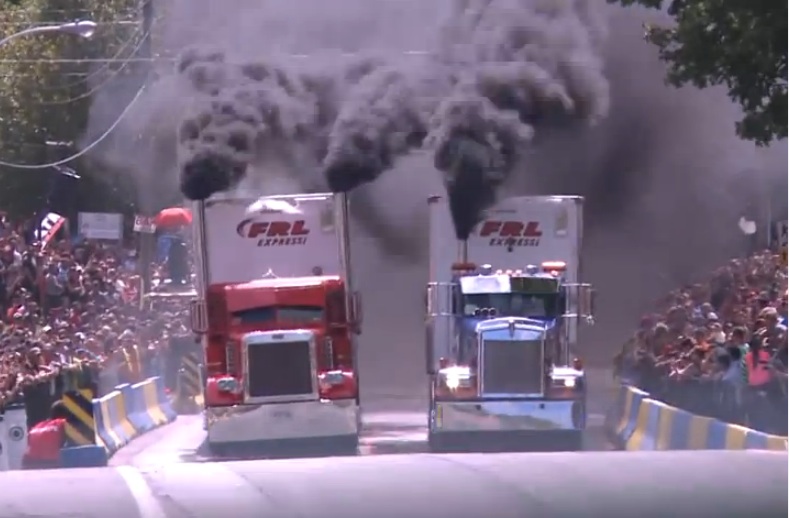 Sounds like an undercard at an MMA fight or something, right? This is main event level competition here especially if you love ridiculously powerful big rigs racing each other. In this video you will see if not the two best trucks of this type in the world two that are definitely in the top five at least by our math. We showed you Sylvain Noel beating a BMW M5 at the drags with his Kenworth yesterday and while that is a fun party trick, his true competition is guys like Vincent Couture. This video was shot at the famed St. Joseph De Beauce Rodeo Du Caminon which is the French way of saying, “The greatest event ever conceived or executed in the history of mankind.” Part drag race, part street race, part disaster waiting to happen, this is the contest where trucks race side by side both loaded with 40,000lbs of weight behind them and bobtail with nothing over the rear axles. On both accounts, the speeds of the truck are zany and their proximity to each other and the crowd are hair raising to say the least.

You will see the guys race each other loaded first and then unloaded second. Pay attention to the driving technique employed by both guys, particularly how often they are shifting. It is not too hard to tell when they are making gear changes because the volcanic ash….errr…unburned fuel soot ceases for a fraction of a second as they row the gears. These things are brutally powerful and  the guys can drive them with amazing precision. We don’t think that there are “short throw” shifters available for the big transmission in these beastly units so the guys are rowing them for all that they are worth.

Like we told you yesterday, engine sizes, combos, and virtually every other aspect of these trucks are held close to the vest by their owners. There’s one of these two with an advantage though…which one is it? Watch the video below to find out –