Watch Ryan Anderson Make The Greatest “Save” In Monster Truck History – Truck Goes From On Roof To On Wheels! 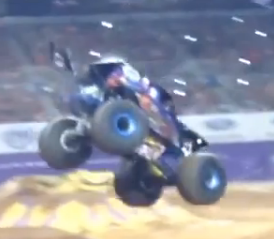 We love people who simply cannot admit defeat. Ryan Anderson, one of Dennis Anderson’s sons is that type of guy. Having grown up as the spawn of the man who is now the world’s most famous (and wealthy) monster truck driver meant that his occupation was pretty much predestined. As history has so often shown, successful racer fathers don’t necessarily mean equally successful racer sons (we’re looking at you Kyle Petty,  Al Unser Jr, etc) but Ryan and his brother Adam are making their old man proud and this video probably brought the patriarch of the Anderson clan to tears of joy.

As you’ll see, Anderson was flying high (literally) around a course during a freestyle session at a stadium style monster truck show. He takes a mondo leap and the truck lands awkwardly, rolling onto its side. In a typical situation this would result in the driver climbing out of the window, standing atop his laid over truck, and getting a big ovation from the crowd. This is not a typical situation because someone named Anderson is involved. Rather than throw in the towel, Ryan stands on the gas with the truck lying completely on its side. His act makes the truck go completely turtle onto the roof, but the fight is still on. What happens next seems to defy physics and logic, but he manages to get the truck to launch itself over and back onto the wheels.

If this sounds completely nuts, that’s because it is. Physics don’t seem to apply to monster trucks or at least not Son Uva digger.

BangShift Exclusive: Mopar Currently Working On Dodge Dart Funny Car Body - Will Be Released In Little More Than A Month Unobtanium: We Get Up Close And Personal With An Ultra-Rare Studebaker R4 V8

2 thoughts on “Watch Ryan Anderson Make The Greatest “Save” In Monster Truck History – Truck Goes From On Roof To On Wheels!”