Watch A Syracuse, Utah Dad Use His Lifted Ram To Stop A Crazed Driver From Running Over Kids At A Park 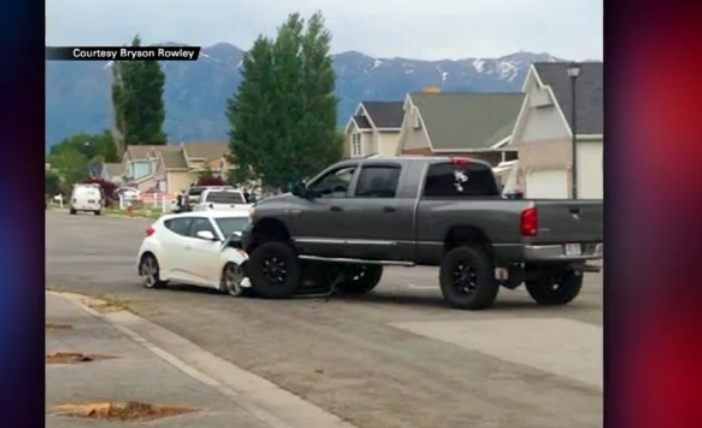 (Words by Bryan McTaggart) – A fourteen year old decided that he would grab the keys to his grandfather’s Hyundai Veloster and go driving around Syracuse, Utah like he was used to doing on Grand Theft Auto. After gaining the attention of authorities, getting caught bombing through a public park rally-style, with children scrambling to get out of the way, Syracuse resident Bryson Rowley had enough and grabbed his own keys.

A few minutes later, as the teen rounded the corner near Rowley’s house, Rowley stuffed his 2008 Dodge Ram 2500 straight into the nose of the Veloster, bringing a swift end to the teen’s joyride. Pictures from the scene showed the damage to the two vehicles: The Hyundai’s nose crumpled, the Ram with a scored bumper and broken grille. Rowley’s explanation for his vigilante action was that he had anticipated the Veloster making another trip through the park where the kids were, and chose to put his truck in the way rather than risk anyone getting hurt.

The teen was taken to a juvenile detention center, and Diesel Trucks For Sale, a Facebook page, is donating a set of Fusion bumpers and LED lights as a reward for putting his truck in harm’s way for public safety. While common sense and most law enforcement agencies would not recommend doing what Rowley did, the truth is that the correct actions by good people are sometimes better than just sitting and waiting for the cops. We at BangShift.com thank Rowley for doing what was right, and thank Diesel Trucks For Sale for stepping up to make looking at the Ram’s bumper bearable until the new one arrives. 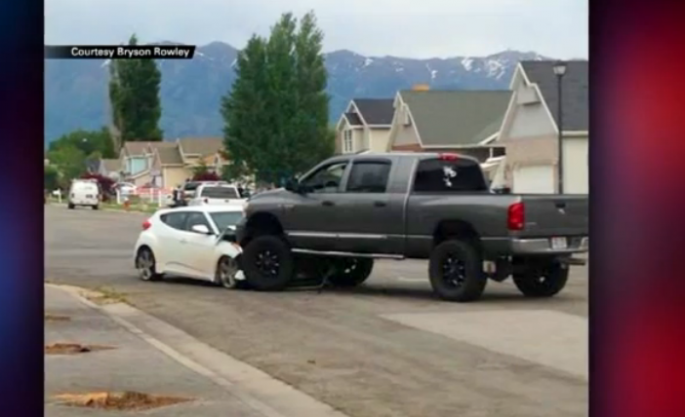 9 thoughts on “Watch A Syracuse, Utah Dad Use His Lifted Ram To Stop A Crazed Driver From Running Over Kids At A Park”