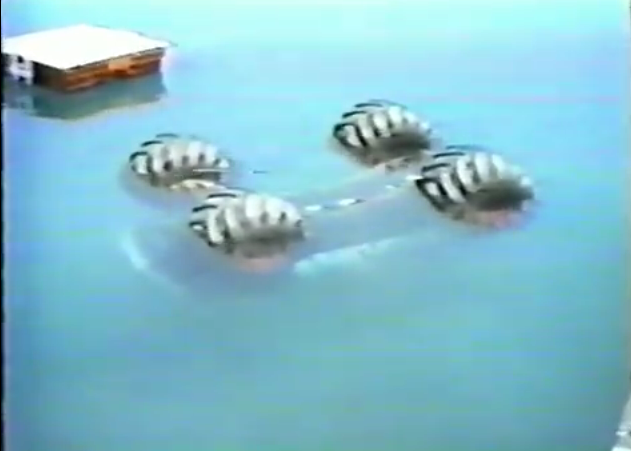 You can almost hear the conversation. Two guys, likely jawing after a couple of beers talking about the merits of floating a monster truck on the water. One guy owns the truck and thinks it can float, the other just wants to see it sink and therefore launches into a full fledged attack on the truck owner’s manhood, intelligence, and engineering ability. Sooner rather than later the guy that owns the truck throws the gauntlet down, telling his challenger that he’ll take the truck to the local quarry and prove that it’ll float like a boat. A wager is placed and both guys can sense victory for their chosen side.

Unfortunately for the owner of the Excaliber monster truck, things did not go his way. Thankfully it didn’t take long to fail, actually it rolled over like a kayak in the rapids almost instantly. We have jumped ahead to start the video at the point when the truck is entering the water but by doing so we skipped over an important part of this process. See, the driver of the truck initially attempted to go in nose first and noticed that when he did that, the thing wouldn’t float. He then decided to back in and this is where his life got complicated.

Being that there is no weight in the back of the truck other than the bed, axles, and frame, it was far more buoyant back there. The rear of the truck was floating like a cork before anyone knew it and as he inched the heavier nose of the truck to the ledge where the moment of truth would come, it looked like he was the smart one here…then the nose pushed off the ledge and it went wrong instantly.

The huge tires, unable to keep the nose up and with a virtually weightless rear end of the truck, it began to nose dive for the bottom instantly. In seconds the driver had killed the engine, the passenger was climbing out the window, and the inevitable came. The truck ended up not as a truck but as a floating platform supported by the four huge inflatable bags, formerly known as its tires. There’s nothing sadder looking than a monster truck floating tires up, that’s for sure.

Apparently they craned the thing out of the lake, fixed it, and continued to use it but we are guessing that the driver/owner learned a heck of a lesson on the day that this was filmed!