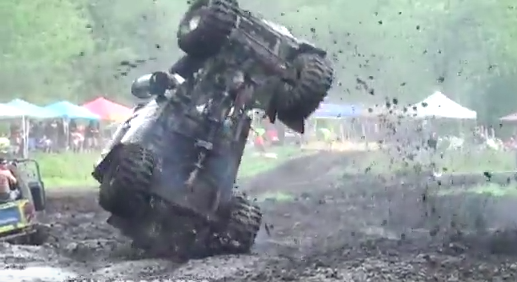 This is not the first time we have showed you the cool Sneaky Pete Peterbilt mud truck on the pages of BangShift.com. In happier times we have showed you the high riding, unique, slogging beast blasting through and over pits in feats of vehicular agility one would not expect from such a top heavy looking rig. Well, in this case that seemingly top heavy nature came back and bit the truck as it wrecks pretty hard during an event in Michigan.

The truck seems to hit a berm and land in an awkward fashion at a steep angle. Rather then bounce back up on its wheels, the thing kind of digs in and pinwheels over, landing on the cab. The driver has to climb out of the passenger door and while we don’t see a lot of him it seems as though he is wearing a German army helmet when he finally extricates himself from the truck.

While we realize that the rig is actually on a normal truck chassis, it is still a unique looking and performing truck in a land of standard looking pickup trucks. We hope that the damage can be fixed and that the Peterbilt will be back to slinging mud in the short term future.

Meanwhile, check out this video and see what kind of a nutso ride it was for the driver of this monster!

PRESS PLAY TO SEE THE SNEAKY PETE EAT IT HARD!