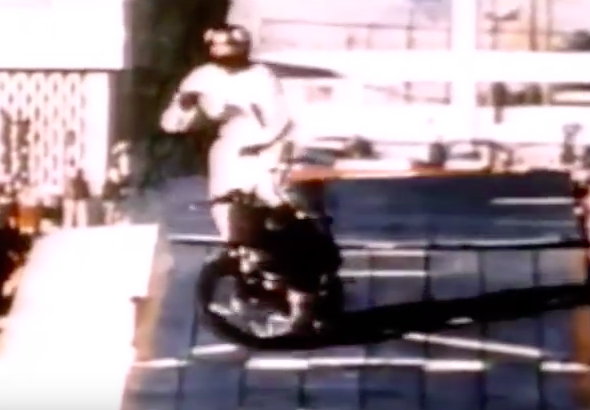 So we’re getting ready for the 2019 NHRA Menard’s Heartland Nationals in Topeka, Kansas and got to thinking about Evel Knievel. See, the Evel Knievel museum is in Topeka right down the road from the drag strip and the place is amazing. This being said, Topeka ain’t Las Vegas, and is about that town of glitter and glitz.

On a typical drive down the strip you’ll see the fountains at Caesar’s Palace and immediately thought that we should show you two of the most famous and shockingly non-lethal motorcycle jumping fails in human history. Both of them involved the fountains and both of them should have killed the guys that tried to fly over them.

Of course the most famous part of this disastrous duo is Evel Knievel. In 1967 he attempted to sky the 141-foot length of the fountains and the result was one of the most famous pieces of slow motion footage ever recorded. Knievel cleared the fountains but due to an awkward landing he was pitched off the motorcycle and at a very high rate of speed he landed on the ground and that’s when bones started breaking. Knievel suffered a crushed pelvis and femur, a broken hip, wrist, and two busted ankles along with a concussion. He was hospitalized for a month and ever the promoter, the gravity of his injuries and his closeness to death may have been stretched some. Not the broken bones part but some of the less visible injuries may have been inflated to make what was already an insane story of survival better. If you have never seen this video it is amazing. Here is it is set to the right tune –

13 years after Knievel’s bone smashing failure at Caesar’s another guy came along to clear the fountains and prove his value as a motorcycle jumper. His name was Gary Wells and as bad as Knievel’s wreck was, Wells actually had it worse. As an aspiring stuntman in 1980 taking on the Caesar’s fountains seems like the natural thing to do and he was going to do it on a big stage. The jump was planned to be featured in an episode of the then-popular television show “That’s Incredible” and featured on network television. The every confident Wells told a reporter before the jump, “To see him (Knievel) crash didn’t bother me. I just assumed that he did’t know what he was doing because he wasn’t successful.” Having already completed jumps of more than 150-feet, this one seemed in Wells’ wheelhouse.

On a lighter and more powerful bike than Knievel, Wells rocketed off into the air and immediately knew he was in trouble. In the video below Wells claims that the launch ramp which he had aligned in the morning had been tweaked a degree or two and that is what set him on a diagonal course that caused him to miss the landing ramp. In an astounding twist, Wells did not fall off the bike but rather he jumped off as it was speeding toward a concrete wall. He cut bait just in time to save his life but he suffered an eerily similar list of injuries as Knievel did.  Broken legs, busted pelvis, concussion, fragged ankles, and a torn heart artery that nearly killed him.

Wasn't Expecting That: Check Out This 3.6L Pentastar-Powered Dart Swinger! "Regular Car" Nothing: Take A Walk Around The LARC-LX That Is Parked Behind The Lane Automotive Museum!